Mason Evan Raymond (born September 17, 1985) is a Canadian professional ice hockey winger currently playing for the Vancouver Canucks of the National Hockey League (NHL). Born in Cochrane, Alberta, he played Junior A in the Alberta Junior Hockey League (AJHL) for two seasons, where he captured league and regional titles with the Camrose Kodiaks, while also being named league MVP in 2005. He then joined the college ranks with the Minnesota-Duluth Bulldogs of the Western Collegiate Hockey Association (WCHA) for a two-year tenure there, as well. He earned WCHA All-Rookie honours in 2006, WCHA First Team All-Star honours in 2007, and was also named the Bulldogs' most valuable player in 2007. Raymond was drafted by the Canucks in the 2005 NHL Entry Draft in the second round, 51st overall. After spending parts of two seasons with their American Hockey League (AHL) affiliate, the Manitoba Moose, he joined the club full-time in 2007–08. He is known as a fast-skating scorer.

After playing AAA midget with the Strathmore Bisons of the Foothills Bisons Hockey Association,[1] Raymond began a two-year Junior A career with the Camrose Kodiaks of the AJHL in 2003–04.[2] He posted a team-high 27 goals and 62 points as a rookie,[3] including six game winning goals.[4]

Prior to the 2004–05 campaign, Raymond was recruited by the Minnesota-Duluth Bulldogs of the WCHA.[1] Having earned an athletic scholarship, he had the choice of playing one more season with Camrose or to make the jump to the college ranks.[1] He consulted with Kodiaks head coach Boris Rybalka and was challenged to improve at the Junior A level before moving to Minnesota-Duluth.[1] As a result, Raymond remained in Camrose, signing a letter of intent in November 2004 to join the Minnesota-Duluth the following year for the 2005–06 season.[5] Several other National Collegiate Athletics Association (NCAA) schools had recruited Raymond as well, including the University of Denver, Western Michigan University and the University of Alaska-Fairbanks. He chose the Bulldogs because he knew with 11 seniors leaving their team the following season, he would have the biggest role with that club.[6]

Raymond went on to lead the AJHL in scoring with 41 goals and was named league MVP in 2004–05.[1] He added 20 points in 15 post-season games as the Kodiaks captured the Rogers Wireless Cup as league champions to advance to the 2005 Doyle Cup,[1] where they were named Canadian Junior 'A' Pacific champions. Having won at the regional level, the Kodiaks earned a berth in the national 2005 Royal Bank Cup, where they finished as runner-up to the tournament host Weyburn Red Wings of the Saskatchewan Junior Hockey League (SJHL). Raymond led all players in tournament scoring with 10 points in five games.[7] The Kodiaks later retired Raymond's number 9 prior to their season-opening game against the Okotoks Oilers on September 10, 2010.[2]

Raymond was selected in the 2005 NHL Entry Draft by the Vancouver Canucks in the second round, 51st overall. He had the opportunity to opt into the previous year's draft, but chose not to.[8] He was scouted by Canucks general manager Dave Nonis as a fast skater with the puck who needed to work on his strength.[9]

Following his draft, he joined the Minnesota-Duluth Bulldogs. Scoring 11 goals and 28 points over 40 games, he was named to the WCHA All-Rookie Team for the 2005–06 season.[4] In his sophomore campaign, Raymond led the Bulldogs in scoring with 14 goals, 32 assists and 46 points. Raymond's points total was good for second in league scoring behind Jonathan Toews.[10] He received WCHA Player of the Week honours twice and was awarded the Mike Seiler Award, as the Bulldogs' Most Valuable Player.[11] His college career ended after the Bulldogs were eliminated by the St. Cloud State Huskies in the second round of the WCHA playoffs.[11]

Raymond chose to forego his final two years of college eligibility to turn professional and signed an amateur tryout contract with the Canucks' minor league affiliate, the Manitoba Moose of the AHL. He scored his first AHL goal in his debut with the Moose on March 23, 2007. The goal was the game winner against goaltender Stefan Liv with four minutes remaining in a 3–2 victory against the Grand Rapids Griffins.[12] Following his second AHL game, the Canucks signed him to an NHL contract.[11] He completed his 11-game regular season in the AHL with two goals and two assists. In the subsequent 2007 playoffs, he added an assist in 13 games, as the Moose were eliminated by the Hamilton Bulldogs in the second round.

The following season, Raymond made the Canucks' roster out of training camp and made his NHL debut on the team's top line with Henrik and Daniel Sedin.[13] He picked up his first NHL point, an assist, in the season-opener against the San Jose Sharks on October 5, 2007.[14] Soon thereafter, he was sent down to the Moose for a brief two-day assignment after having been a healthy scratch.[15][16] He returned to the Canucks on October 18, 2007, and was later returned to the Moose at the end of the month for a longer assignment.[15]

Succeeding at the AHL level, Raymond recorded a five-point game with a hat trick and two assists during a match against the Rochester Americans on November 21, 2007.[17] The Canucks recalled him the following month on December 11 following injuries to forwards Brendan Morrison and Brad Isbister.[15][18] The next day, he scored his first NHL goal in his first game back against goaltender Jean-Sébastien Giguère of the Anaheim Ducks.[18] The goal came assisted on a one-timer pass from Moose teammate Jason Jaffray who had been called up from Manitoba the same day as Raymond.[18] Later that game, he also assisted Jaffray's first NHL goal in the third period.[18] The Canucks went on to win the game 3–2.[18]

Known for his skating ability, Raymond won the fastest skater segment of the Canucks' 2008 SuperSkills Competition with a time of 14.283 seconds.[19] A week later, he was re-assigned to the Moose one last time on January 13, 2008, for three days, before remaining with the Canucks.[15] On March 17, 2008, he suffered an injury after a knee-on-knee collision with defenceman Keith Ballard in a game against the Phoenix Coyotes, sidelining him for the final eight games of the season.[20][15] He finished his rookie NHL campaign with 21 points in 49 games with the Canucks, while also recording seven goals and 17 points in 20 games with the Moose.

Raymond had a quick start to his second season in 2008–09, scoring 10 points in his first 13 games,[10] but trailed off to add just 13 points for the remainder of the campaign. Midway through the season, he was named to the 2009 YoungStars Game in Montreal,[21] helping the sophomores beat the rookie team 9–5.[22] He finished his second NHL season with 11 goals and 12 assists in 72 games. In the ensuing 2009 playoffs, where the Canucks entered as the third seed in the Western Conference, Raymond scored his first NHL post-season goal in game three of the second round against the Chicago Blackhawks, a 3–1 win for the Canucks.[23] Vancouver went on to be eliminated by the Blackhawks in six games.[24] Raymond finished with two goals and an assist in 10 post-season contests. 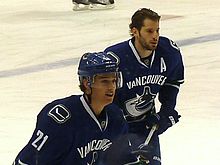 Raymond skates with linemate Ryan Kesler prior to a game in February 2011.

Midway through the 2009–10 season, Raymond recorded his first NHL hat trick with the game's final three goals in a 5–1 win against the Calgary Flames on December 27, 2009.[25] Raymond enjoyed a breakout campaign in his third NHL season, playing regularly on the Canucks' second line with centre Ryan Kesler and newly-acquired winger Mikael Samuelsson.[26] He finished with a career-high 25 goals, 28 assists and 53 points. Prior to the final game of the regular season, he was voted by the Canucks' booster club to receive the Fred J. Hume Award as the team's "unsung hero".[27] The Canucks entered the 2010 playoffs as the third seed for the second consecutive year. Raymond contributed three goals and an assist over 12 post-season games as Vancouver was eliminated once again in the second round by the Blackhawks.[28]

Becoming a restricted free agent on July 1, 2010, Raymond filed for salary arbitration after initially failing to come to terms with the Canucks.[29] However, the two sides later agreed to a two-year, $5.1 million contract on July 26, 2010, before their arbitration hearing scheduled for the same day. The deal pays Raymond $2.5 million in the first year and $2.6 million in the second[30] – a raise from his $760,000 salary from the previous season.[29] It was reported the Canucks had proposed an annual $2.3 million salary, while Raymond had wanted $3.6 million.[31] Several months into the 2010–11 season, he suffered a broken thumb and missed 10 games in December 2010. Raymond struggled in the first year of his new contract and he was often demoted off of the second line.[32] As a result, he finished with diminished season totals of 15 goals, 24 assists and 39 points over 70 games. On a team basis, the Canucks won their first-ever Presidents' Trophy, having accomplished the best regular season record in the NHL that year. Entering the 2011 playoffs as the first seed in the West, they eliminated the Chicago Blackhawks, Nashville Predators and San Jose Sharks in the first three rounds to advance to the Stanley Cup Finals for the first time in 17 years. During his first shift of Game 6 against the Boston Bruins, Raymond suffered a fractured vertebrae after getting hit by opposing defenceman Johnny Boychuk. With Raymond's body twisted to try and retrieve a loose puck, he was engaged by Boychuk who proceeded to hit him into the boards after the puck had gone by. Bent over at the time of the hit, Raymond collided with the boards tailbone-first. He was taken to the hospital after initially being helped off the ice.[33][34] Raymond later described the injury as "the most pain [he's] been in ever."[35] No penalty was called on the play nor did Boychuk receive any discipline from the league following the game, which drew public criticism from Canucks general manager Mike Gillis.[34] Vancouver went on to lose Games 6 and 7 as Boston won the Stanley Cup. Raymond made an appearance in Rogers Arena prior to the final game of the series. Wearing a plastic corset to support his back, he waved to the crowd who gave him a standing ovation.[36]

While the injury did not require surgery, Raymond retained the back brace for six weeks. In late-July, he received a text message from Boychuk explaining that his intention was not to injure with the hit.[35] Unable to train on the ice or with weights, Raymond spent the 2011 off-season largely inactive, with the exception of cardiovascular workouts.

Following his 2010 playoff run with the Canucks, Raymond was added to Team Canada's roster for the 2010 IIHF World Championship in Germany, his first international tournament.[37] Joining the team midway through the tournament during the qualification round,[38] he recorded his lone point of the tournament, an assist, on a goal by Matt Duchene during a 3–2 loss to the Czech Republic.[39] The following game, Canada was eliminated in the quarterfinal by Russia, losing the game 5–2.[40]

Raymond was born in Cochrane, Alberta, a town west of Calgary, to parents Carol and Terry Raymond.[41] He began skating when he was four on his family's backyard rink.[41] Growing up, he was a Calgary Flames fan.[41] He left home as a teenager for the 2003–04 season to play Junior A with the Camrose Kodiaks in Camrose, Alberta.[2][41]