The 2007–08 NHL season was the 91st season of operation (90th season of play) of the National Hockey League (NHL). It began on September 29, 2007, with the regular season ending April 6, 2008. The Stanley Cup playoffs ended on June 4, with the Detroit Red Wings taking the championship .The 56th NHL All-Star Game was held in Atlanta, Georgia as the Atlanta Thrashers hosted the event at Philips Arena on January 27, 2008. The hosting by Atlanta was rescheduled from 2005, when a lockout cancelled the entire 2004–05 season.

On March 1, 2007, the NHL announced the regular season would open on September 29, 2007, with the first of back-to-back games in London at The O2. They were the first NHL regular season games ever played in Europe. Both games featured the defending Stanley Cup Champion Anaheim Ducks, and the Los Angeles Kings (who are owned by Anschutz Entertainment Group, the same company that owns The O2).[2]

The official average attendance per game was 17,625 per game. However, if the two games played at the O2 Arena are counted, the number is 17,309 per game.

On September 17, 2007, the NHL announced the first outdoor game in over four years would be played between the Pittsburgh Penguins and the Buffalo Sabres at Buffalo's Ralph Wilson Stadium, home of the Buffalo Bills football team, on January 1, 2008. The event—known as the AMP Energy NHL Winter Classic—was the first time an NHL regular-season game had been played outdoors in the United States, and it set an NHL attendance record of 71,217 people. The only previous outdoor NHL game was the 2003 Heritage Classic played between the Montreal Canadiens and Edmonton Oilers at Commonwealth Stadium on November 22, 2003.[3]

During board of governors meetings held on September 18, 2007 in Chicago, cities including Las Vegas, Kansas City, Houston, Milwaukee, Quebec City, Seattle, and Winnipeg were discussed as possible expansion destinations. The NHL also discussed the current "unbalanced" schedule and voted on a new schedule format at a board meeting in November, so that all teams will play each other at least once and reduce intradivisional play in the 2008–09 season, in essence returning to the scheduling structure that existed in 2003–04, and would have existed in 2004–05. The sale of the Lightning and Predators teams were not completed for board approval.[4]

A number of minor rule changes were introduced for the start of the 2007–08 season. Penalty shots can now be awarded when a player with the puck is hauled down from the centre line on in rather than from the opposition's blue-line as previously was the case. Also, the interference rule was altered to allow for a major penalty and a game misconduct when an injury results. Another change affected faceoff placement: All faceoffs must be conducted at one of the nine dots painted on the rink.

The New Jersey Devils began playing in their new arena, the Prudential Center in Newark, New Jersey. However, since the arena was not ready by the beginning of the season, they began their season with a nine-game road trip.

Mike Cammalleri of the Los Angeles Kings scored the first goal of the season against the Anaheim Ducks on September 29 in the opening game played in London, England.

Richard Zednik of the Florida Panthers was severely injured after having his external carotid artery in his neck accidentally cut by the skate of teammate Olli Jokinen in a game against the Buffalo Sabres on February 10. Zednik fully recovered from the injury, but missed the remainder of the season.

The Anaheim Ducks and Ottawa Senators matched up for the first time since the 2007 Stanley Cup Finals on March 3, 2008 at Anaheim.

The Washington Capitals improved from 14th place in the previous season and last in the Eastern Conference during the first third of the 2007–08 season to finish as the third seed in the 2007–08 playoffs and winners of the Southeast Division. The turnaround was attributed mainly to the hiring of then-American Hockey League coach Bruce Boudreau, whose efforts won him the Jack Adams Award for the 2007–08 season.

The San Jose Sharks went the entire month of March without a regulation loss and were the media's favorite to win the cup going into the play-offs.

The Detroit Red Wings won the Presidents' Trophy for finishing the regular season with the most points (115).

Where two or more clubs are tied in points at the end of the regular season, the standing of the clubs is determined in the following order: 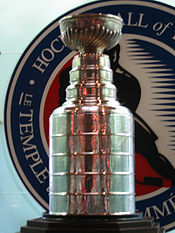 In each round, the highest remaining seed in each conference is matched against the lowest remaining seed. The higher-seeded team is awarded home ice advantage. In the Stanley Cup Finals, home ice is determined based on regular season points; thus, the Detroit Red Wings had home ice advantage. Each best-of-seven series follows a 2–2–1–1–1 format: the higher-seeded team will play at home for have games 1 and 2 (plus 5 and 7 if necessary), and the lower-seeded team will be at home for the other games.

The following is a list of players of note who played their first NHL game in 2007–08:

The following is a list of players of note that played their last game in the NHL in 2007–08: