The Manitoba Moose were a Canadian professional ice hockey team based in Winnipeg, Manitoba that played in the International Hockey League from 1996 to 2001 and American Hockey League from 2001 to 2011. The team moved to St. John's, Newfoundland and Labrador in 2011 to become the St. John's IceCaps.

After the departure of the National Hockey League's Winnipeg Jets to Phoenix, Arizona in 1996, a group of local businessmen, including Mark Chipman, purchased the Minnesota Moose of the IHL. The team was relocated to Winnipeg in order to provide a new tenant for the Winnipeg Arena and keep professional hockey in the city. The team was rechristened as the Manitoba Moose.[1][2]

The team's first season in Winnipeg was a disaster. Former Montreal Canadiens coach Jean Perron was brought in as head coach and general manager, but lasted only 50 games before he was fired on January 4, 1997.[3][4] Perron's short time with the Moose was turbulent both on and off the ice and the team won only 16 games. Upon his dismissal, Perron lashed out at the ownership, the media, and the players, including a personal attack on team captain Randy Gilhen.[5][6] Perron threatened legal action against the team, but nothing came of it.[7] Assistant coach Randy Carlyle, a former Jets defenceman, took over as head coach and led the team to a winning record in their final 32 games of the season, but the team still missed the playoffs.

Carlyle served as head coach and general manager for remainder of the team's tenure in the IHL. The Moose had moderate regular-season success and qualified for the Turner Cup playoffs three out of four seasons, making it as far as the second round. Carlyle was named the league's General Manager of the Year for the 1998-99 season.[8][9] During their five seasons in the IHL, the Moose remained independent and did not affiliate with an NHL team, although several NHL clubs did loan players to the Moose.

With the IHL's demise in 2001, the Moose and five other former IHL teams joined the AHL. As part of the move, the Moose were required to affiliate with an NHL club and became the top affiliate of the Vancouver Canucks. This partnership would last all ten seasons the Moose would play in the AHL. Former Canucks star Stan Smyl was chosen by the Canucks as the new head coach of the Moose, while Carlyle remained as general manager for one season before leaving to become an assistant coach with the Washington Capitals. In 2002-03, Smyl led the team to the second round of the Calder Cup playoffs, but lost to the Hamilton Bulldogs in seven games. After the team missed the playoffs the following season, Smyl was reassigned within the Canucks' organization.[10]

With the departure of Smyl, Carlyle returned as head coach of the Moose in 2004, while Craig Heisinger, who had been promoted to replace Carlyle as general manager, retained his position. The biggest news during the 2004-2005 season was the opening of the MTS Centre in downtown Winnipeg. The new arena was a huge success and so was the team. The Moose made it to the conference final for the first time in team history, but were swept in four games by their old IHL rivals, the Chicago Wolves.[10] Mark Chipman was awarded the James C. Hendy Memorial Award for AHL Executive of the Year. After the season, Carlyle was hired the Anaheim Ducks as their new head coach.[9]

Former Canadiens head coach Alain Vigneault was brought in as the new head coach for the 2005-06 season. The Moose signed Winnipegger and three time Stanley Cup champion Mike Keane and named him captain. Keane quickly became a fan favorite and the team had another great year, but again lost in the second round of the playoffs. After the season, Vigneault was promoted by the Canucks to fill their vacant head coaching position when Marc Crawford was let go. 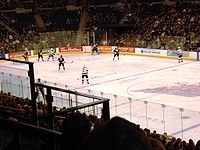 A Moose game at the MTS Centre

Scott Arniel was selected to replace Vigneault. A former Moose captain and assistant coach, Arniel coached the team for four seasons. In 2008-09, he led them to their best season in franchise history when the team finished with 107 points, the best record in the league. The Moose went all the way to the Calder Cup Finals, losing the final to the Hershey Bears. Arniel was awarded the Louis A. R. Pieri Memorial Award as the AHL Coach of the Year, while general manager Heisinger became the second member of the Moose front office staff to win the James C. Hendy Memorial Award.[11][12]

Arniel became the third Moose coach in six years to make the jump to the NHL when he was hired by the Columbus Blue Jackets as their new head coach in 2010. Ironically, Arniel was replaced by former Blue Jackets interim head coach Claude Noel, whose contract had not renewed by the club.[13] During the same off-season, Keane's contract was not renewed and his #12 jersey was later retired on Mike Keane Tribute Night, February 12, 2011.[14][15] During the 2010-11 playoffs, the Moose came back from 3 game to 1 deficit to the Lake Erie Monsters in the first round to advance. They fell behind 3 games to 1 again in round two, this time to the Bulldogs, and came back to force a seventh game. However, the Bulldogs won Game 7 and the series with a 2-1 win in triple overtime. It was the longest Game 7 in AHL history and proved to be final ever game for the Manitoba Moose.[16]

During their ten seasons in the league, the Moose were one of the most successful franchises in the AHL. Moose attendance was among the best in the league every season, including an average of 8,404 per game in the final season in Winnipeg.[17] The organization was also popular with the players, as the Moose "had the reputation of being run like an NHL club".[18] League president and CEO David Andrews called the Moose "a flagship franchise for the AHL".[19]

The Moose finished the 2008-09 season with the best record in the AHL. In the second round of the Calder Cup Playoffs, the Moose completed their first playoff sweep in franchise history, defeating the Grand Rapids Griffins. After beating the Houston Aeros in six games to win the Western Conference final, the Moose advanced to the Calder Cup finals for the first time. Their opponent was the Hershey Bears, the defending champions.[20]

After the teams split the first two games in Winnipeg, the series shifted to the Giant Center in Hershey for Games 3, 4, and 5. Hershey won Games 3 and 4 by scores of 3-0 and 2-1 to take a 3 to 1 series lead. However, the Moose came back to win Game 5 and send the series back to Winnipeg for Game 6 and hopefully a Game 7.

In Game 6, in front of another sold crowd at the MTS Centre, the Bears scored three first period goals en route to a 4-1 win over the Moose to win their team's tenth Calder Cup.[23]

On May 31, 2011, Mark Chipman, on behalf of True North Sports and Entertainment (which acquired the Moose in 2003), announced the purchase of the Atlanta Thrashers of the NHL with the intent of moving them to Winnipeg for the 2011-12 season. As a result, True North negotiated a deal with former Premier of Newfoundland and Labrador Danny Williams to relocate the Moose to St. John's, Newfoundland and Labrador for the 2011-12 season, ending their 15 year tenure in Manitoba.[24] On June 10, 2011, the AHL board of governors approved the relocation. True North continues to own the franchise, but the team, now known as the St. John's IceCaps, is operated by a group headed by Williams. The IceCaps serve as the AHL affiliate for True North's NHL team, the Winnipeg Jets.[25][26]

These are the top-ten point-scorers in franchise history. Figures are updated after each completed AHL regular season.