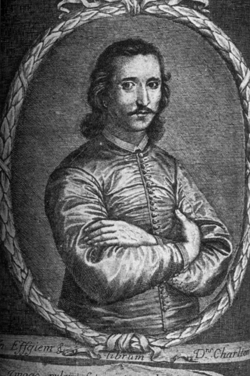 Walter Charleton (February 1619 – c. April 1707) was an English writer. According to Jon Parkin, he was "the main conduit for the transmission of Epicurean ideas to England".[1]

He was the son of the rector of Shepton Mallett in Somerset, where he was born 2 February 1619. He received his early education from his father, and when sixteen entered Magdalen Hall, Oxford, under the tuition of John Wilkins. At the early age of 22 (1641) he received the degree of M.D.. and in the same year was appointed physician to Charles I, who was then at Oxford. In 1650 Charleton settled in London, and was on 8 April admitted a candidate of the College of Physicians. A royalist, he was appointed physician to the exiled king Charles II but remained in London writing, in Russell Street, Covent Garden.[2]

He had in early life read much in Van Helmont, and spent time in reading and composition, rather than with patients. Thomas Hobbes, Lord Dorchester, Sir Francis Prujean and George Ent were his friends.[2]

He was a copious writer also on theology, natural history, and antiquities, and published Chorea Gigantum (1663) to prove that Stonehenge was built by the Danes. Charleton claimed it was used by them as a place of assembly, and of the inauguration of kings. The only argument is that similar stone works exist in Denmark, a fact supplied to Charleton by the Danish antiquary, Wormius, with whom he had corresponded on the book of Inigo Jones in which Stonehenge is said to be a Roman temple. The Chorea Gigantum had a poem by John Dryden written in its praise, the Epistle to Dr. Charleton, prefixed to the presentation copy given to the king.[2]

He was one of the "character" writers, and in this kind of literature wrote an essay A Brief Discourse concerning the Different Wits of Men (1675).