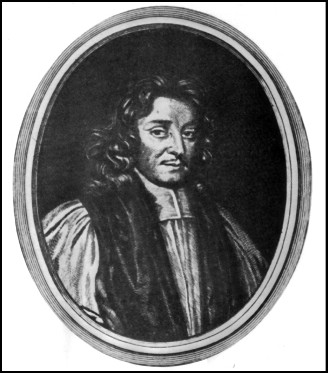 John Wilkins (, - , ) was an English clergyman and author. He was founder and first secretary of the in 1660 and from 1668 until his death. As an author, he is particularly known for "".

Wilkins is the only person to have headed a college at both the and the .

Wilkins was born at , and educated at Magdalen Hall (which later became Hertford College), . His father was a , and his grandfather was a vicar, . After ordination, Wilkins became of his home town of Fawsley in 1637, but soon resigned and became chaplain successively to Lord Saye and Sele, Lord Berkeley, and Prince Charles Louis, nephew of King Charles I and afterwards elector palatine of the .

In 1641, Wilkins published an anonymous treatise entitled "Mercury, or The Secret and Swift Messenger". [ [http://www.light-of-truth.com/Secret_Messenger/secret.html M E R C V R Y: The secret and swift Messenger] Scan of original book] This small but comprehensive work on proved a timely gift to the diplomats and leaders of the imminent .

In 1648, he became warden of . Under him the college prospered extraordinarily, for, although a supporter of , he remained in touch with the most cultured Royalists, who placed their sons in his charge. In 1656, he married Robina Cromwell, sister of Oliver Cromwell. In 1659, shortly before his death, Oliver Cromwell arranged his appointment as Master of [ [http://www.trin.cam.ac.uk/index.php?pageid=172 The Master of Trinity] at ] , an appointment that was confirmed by Cromwell's successor as , his son .

At the Restoration in 1660, the new authorities deprived Wilkins of the position given him by Cromwell; he gained appointment as of York and of , . In 1661, he was reduced to preacher at , lodging with his friend . In 1662, he became vicar of , . He became vicar of , Northamptonshire, in 1666, of Exeter in 1667, and in the following year prebendary of St Paul's and of Chester.

Possessing strong scientific tastes, Wilkins was the chief founder of the and its first secretary. In 1668 he published his "Essay towards a Real Character and a Philosophical Language", in which he attempted to create a universal language to replace Latin as a completely unambiguous tongue with which scholars and philosophers could communicate. [ [http://www.alamut.com/subj/artiface/language/johnWilkins.html The Analytical Language of John Wilkins] from alamut.com]

The "" (1663), an ode to the society, describes his efforts:cquote
A Doctor counted very able
Designes that all Mankynd converse shall,
Spite o' th' confusion made att Babell,
By Character call'd Universall.
How long this character will be learning,
That truly passeth my discerning. [Stimson, Dorothy. "'Ballad of Gresham College'". "Isis" volume 18, number 1, 1932. pp. 103-117.]

He died in London, most likely from the medicines used to treat his s and stoppage of urine. [cite book
first=Stephen | last=Inwood | year=2005
title=The Forgotten Genius: The Biography of Robert Hooke 1635-1703
publisher=MacAdam/Cage Publishing
isbn=1596921153 ]

The influence and ambitions of John Wilkins were an important thread in the trilogy "" by .

His numerous written works include:
*"The Discovery of a World in the Moone" (1638) [ [http://www.independent.co.uk//eceRedirect?articleId=27752&pubId=55 Cromwell's moonshot: how one Jacobean scientist tried to kick off the space race] from ""] [ [http://www.positiveatheism.org/hist/brunof14.htm The Discovery of a World in the Moon] from http://www.positiveatheism.org]
*"A Discourse Concerning a New Planet" (1640)
*"Mercury, or the Secret and Swift Messenger" (1641), the first English-language book on
*"Mathematical Magick" (1648)
*"" (London, 1668), in which he proposes a new universal language for the use of s.
*"Of the Principle and Duties of Natural Religion" (London, 1675).