Hardboiled
This article is about the literary style. For other uses, see Hard boiled (disambiguation).

Hardboiled crime fiction is a literary style, most commonly associated with detective stories, distinguished by the unsentimental portrayal of violence and sex. The style was pioneered by Carroll John Daly in the mid-1920s,[citation needed] popularized by Dashiell Hammett over the course of the decade, and refined by Raymond Chandler beginning in the late 1930s. [1]

From its earliest days, hardboiled fiction was published in and closely associated with so-called pulp magazines, most famously Black Mask under the editorship of Joseph T. Shaw.[1] In its earliest uses in the late 1920s, "hardboiled" didn't refer exclusively to a type of crime fiction; it meant any tough and violent fiction, which also included adventure and western stories. Pulp historian Robert Sampson argues that the "Don Everhard" stories by Gordon Young in Adventure magazine, about a gun-toting urban gambler, anticipated the "hard-boiled" detective stories. [2] The exclusive reference to crime fiction probably became fixed in the early 1930s,[citation needed] although it's impossible to pin down with precision. The hard-boiled crime story became a staple of several pulp magazines in the 1930s; in addition to Black Mask, hard-boiled crime fiction appeared in Dime Detective and Detective Fiction Weekly.[3] Later, many hardboiled novels were published by houses specializing in paperback originals, also colloquially known as "pulps." Consequently, "pulp fiction" is often used as a synonym for hardboiled crime fiction. In the United States, the original hardboiled style has been emulated by innumerable writers, including Chester Himes, Mickey Spillane, Ross Macdonald, John D. MacDonald, Robert B. Parker, Sara Paretsky, Sue Grafton, and Walter Mosley.

The term comes from a colloquial phrase of understatement. For an egg, to be hardboiled is to be comparatively tough. The hardboiled detective—originated by Daly's Terry Mack and Race Williams and epitomized by Hammett's Sam Spade and Chandler's Philip Marlowe—not only solves mysteries, like his "softer" counterparts, the protagonist confronts danger and engages in violence on a regular basis. The hardboiled detective also has a characteristically tough attitude—in fact, Spade and Marlowe are two of the primary fictional models for the attitude that has come to be known as "attitude":[citation needed] cool, cocky, flippant. For extensive detail on the identifying marks of the style, see the history of American hardboiled fiction. 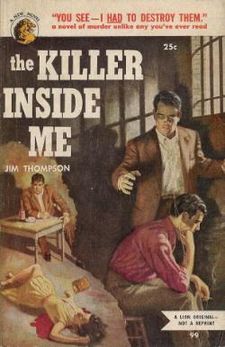 The Killer Inside Me (1952), one of the definitive noir novels, by Jim Thompson. The guilty party? "All of us."

Noir fiction is the name sometimes given to a mode of crime fiction regarded as a subset of the hardboiled style. Per noir aficionado George Tuttle[citation needed]:

In this sub-genre, the protagonist is usually not a detective, but instead either a victim, a suspect, or a perpetrator. He is someone tied directly to the crime, not an outsider called to solve or fix the situation. Other common characteristics ... are the emphasis on sexual relationships and the use of sex to advance the plot and the self-destructive qualities of the lead characters. This type of fiction also has the lean, direct writing style and the gritty realism commonly associated with hardboiled fiction.[4]

The seminal American writer in the noir fiction mode was James M. Cain—regarded as the third major figure of the early hardboiled scene,[citation needed] he debuted as a crime novelist in 1934, right between Hammett and Chandler. Other important U.S. writers in the noir tradition are Cornell Woolrich, Dorothy B. Hughes, Jim Thompson, David Goodis, Charles Williams, and Elmore Leonard. The term "noir fiction" may evoke unrelenting gloom; in fact, while the work of all the major authors in the field might be characterized by a fatalistic attitude, it has been expressed in a variety of tones. Woolrich and Goodis indeed often portray what seems to be a sunless world, but Leonard is frequently bright, even when the color is blood red. Hughes and Williams are somewhere in the middle—her work is serious, yet with a lot of hardboiled "attitude," while his forte is the philosophical smile and shrug. As for Cain and Thompson, each wrote some of the blackest of American genre fiction, and some of the funniest.[citation needed] The popular use of "noir" in the term "noir fiction" derives immediately from "film noir" as it has been used to characterize certain putatively "dark" Hollywood crime dramas and melodramas, many early examples of which were based on works by the original hardboiled writers. In turn, "noir" (French for "black"), first applied to American films in the mid-1940s by observers in France, was used there in similar senses. Most relevantly, the term roman noir (“black novel") was employed to describe a range of books, some that an English speaker might think of as mysteries, others as gothic melodramas. Note that while the meanings of "noir fiction" and roman noir are closely related, the derivation is not direct. Making the connection even tighter, in 1945 the French publisher Gallimard brought out a new series of paperback thrillers, many of them translations of hardboiled American fiction. The line was called Série noire.

Major variants of hardboiled and noir

W. R. Burnett's influential Little Caesar (1929) was turned into one of the first major Hollywood gangster films of the sound era in 1931.

W. R. Burnett, part of the first wave of hardboiled writers along with Hammett and Cain, wrote in a style that split the difference, often featuring heroic gangsters as his leads. The five novels featuring dipso detective Bill Crane written by Jonathan Latimer over the course of the 1930s constitute the first literary series of hardboiled screwball comedy.[citation needed] The work of Charles Willeford has sometimes been referred to as hardboiled or, particularly, noir fiction, though it is perhaps more helpfully characterized as "neo-noir," as Willeford's crime writing rarely employs the conventions of hardboiled literature without critiquing them. Of latter-day hardboiled novelists who regularly feature detective protagonists, the most prominent to write in an unmistakably noir mode is James Ellroy. In terms of character, plot, and worldview, Patricia Highsmith is a quintessential writer of noir fiction—indeed, her work has been the source for numerous movies, both American and European, regarded as film noirs—but her style sets her apart: far from "lean" and "direct," it is characteristically dense and subtle.

Recently, the noir crime fiction genre has been re-energized with the success of Stieg Larsson’s The Girl with the Dragon Tattoo, and the popularity of the video game L.A. Noire.