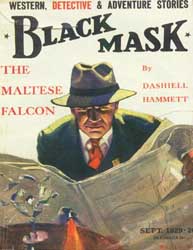 "Black Mask" was a launched in 1920 by journalist and drama critic as one of a number of money-making publishing ventures to support the prestigious literary magazine "", which Mencken edited, and which operated at a loss. Under their editorial hand, "Black Mask" was not exclusively a publisher of crime fiction, offering, according to the magazine, "the best stories available of adventure, the best mystery and detective stories, the best romances, the best love stories, and the best stories of the occult."

After eight issues, Mencken and Nathan considered their initial $500 investment to have been sufficiently profitable, and they sold the magazine to its publishers, Eltinge Warner and Eugene Crow for $12,500. Joseph Shaw took over the editorship.

Shaw, following up on a promising lead from one of the early issues, promptly turned "Black Mask" into an outlet for the growing school of naturalistic crime writers led by . Daly's private detective Race Williams was a rough and ready character with a sharp tongue, and established the model for many later acerbic private eyes.

"Black Mask" later published the profoundly influential , creator of and , and other writers who came in his wake, such as and . The magazine was hugely successful, and many of the writers, such as , who appeared in its pages went onto greater commercial and critical success.

"Black Mask" reached a sales peak in the early 1930s, but then interest began to wane under increasing pressure from the market, cheap paperback books, radio and the cinema. In 1936, refusing to cut writers' already meager pay, Shaw resigned, and many of the high-profile authors abandoned the magazine with him. From this point onward, "Black Mask" was in decline, eventually ceasing publication in 1951.

"Black Mask" magazine was the specific pulp fiction magazine that inspired the 1994 film "Pulp Fiction". Originally, the title of the film was "Black Mask", before being changed.