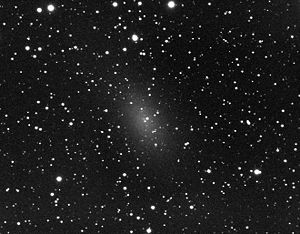 NGC 147, a dwarf spheroidal galaxy of the Local Group

Dwarf spheroidal galaxy (dSph) is a term in astronomy applied to low luminosity galaxies that are companions to the Milky Way and to the similar systems that are companions to the Andromeda Galaxy M31. While similar to dwarf elliptical galaxies in appearance and properties such as little to no gas or dust or recent star formation, they are approximately spheroidal in shape, generally lower luminosity, and are only recognized as satellite galaxies in the Local Group.[1]

While there were nine "classical" dSph galaxies discovered up until 2005, the Sloan Digital Sky Survey has resulted in the discovery of 11 more dSph galaxies—this has radically changed the understanding of these galaxies by providing a much larger sample to study.[2]

Recently, as growing evidence has indicated that the vast majority of dwarf ellipticals have properties that are not at all similar to elliptical galaxies, but are closer to irregular and late-type spiral galaxies, this term has been used to refer to all of the galaxies that share the properties of those above. These sorts of galaxies may in fact be the most common type of galaxies in the universe, but are much harder to see than other types of galaxies because they are so faint.