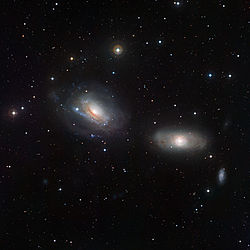 NGC 3169 (left) and NGC 3166 (right) display some curious features, demonstrating that each member of the duo is close enough to feel the distorting gravitational influence of the other. Iimage from the Wide Field Imager on the MPG/ESO 2.2-metre telescope at the La Silla Observatory.

A giant galaxy interacting with its satellites is common. A satellite's gravity could attract one of the primary's spiral arms. Or the satellite could dive in to the primary (e.g. Sagittarius Dwarf Elliptical Galaxy). This could trigger a small amount of star formation.

Colliding galaxies are common in galaxy evolution. Due to the extremely tenuous distribution of matter in galaxies, these are not collisions in the normal sense of the word, but rather gravitational interaction. Colliding may lead to merging. This occurs when two galaxies collide and do not have enough momentum to continue traveling after the collision. Instead, they fall back into each other and eventually merge after many passes through each other, forming one galaxy. If one of the colliding galaxies is much larger than the other, it will remain largely intact after the merger; that is, the larger galaxy will look much the same while the smaller galaxy will be stripped apart and become part of the larger galaxy. Through-passes are less disruptive of galaxy shapes than mergers in that both galaxies largely retain their material and shape after the pass.

Galaxy collisions are now frequently simulated on computers, with all the realistic physics, including gravity forces, gas dissipation, star formation and feedback. Dynamical friction slows down galaxy pairs, which may or may not merge at some point, according to the initial relative energy of the orbits. A simulated library of galaxy collisions can be found at the Paris Observatory website: GALMER [1]

Galactic cannibalism refers to the process by which a large galaxy, through tidal gravitational interactions with a companion, merges with that companion, resulting in a larger, often irregular galaxy.

The most common result of the gravitational merger of two or more galaxies is an irregular galaxy of one form or another, although elliptical galaxies may also result.

It has been suggested that galactic cannibalism is currently occurring between the Milky Way and the Large and Small Magellanic Clouds. Streams of gravitationally-attracted hydrogen arcing from these dwarf galaxies to the Milky Way is taken as evidence for this theory.

Future collision of the Milky Way with Andromeda

Astronomers have estimated that our galaxy, the Milky Way galaxy, will collide with the Andromeda galaxy in about 4.5 billion years. It is thought that the two spiral galaxies will merge to become an elliptical galaxy.[2][3]