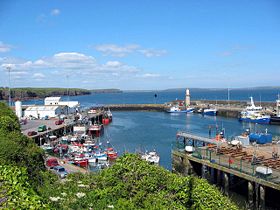 Dunmore East (Irish: An Dún Mór Thoir) is a popular tourist and fishing village village in County Waterford, Ireland. Situated on the west side of Waterford Harbour on Ireland's southeastern coast, it lies within the barony of Gaultier (Gáll Tír – "foreigners' land" in Irish): a reference to the influx of Norman settlers in the area.

Iron Age people established a promontory fort overlooking the sea at Shanoon (referred to in 1832 as meaning the 'Old Camp' but more likely Canon Power's Sean Uaimh, 'Old Cave') at a point known for centuries as Black Nobb, where the old pilot station now stands, and underneath which a cave runs. Henceforth the place was referred to as Dun Mor, the Great Fort.

Fish was an important part of the people's diet, and for hundreds of years a fishing community lived here.

In about 1640, Lord Power of Curraghmore, who owned a large amount of property in the area, built a castle on the cliff overlooking the strand about two hundred metres from St. Andrew's Church. The castle was falling into ruin by the middle of the next century and now just one tower remains.

The old church of Killea (Cill Aodha — Aodh's Church) is thought to have been built in the twelfth century and one wall still stands, opposite the Roman Catholic church of The Holy Cross, at the top of Killea hill.

In Smith's history of Waterford, the village was mentioned as being a prominent fishing port about the year 1745. The fishermen's homes were situated in the lower village near the Strand Inn and boats were launched from the strand there before the harbour was built.

In 1814 dramatic changes took place when Alexander Nimmo, the Scottish engineer (builder of Limerick's Sarsfield Bridge) commenced work on the new harbour at Dunmore to accommodate the packet station for ships, which carried the Royal Mail between England and Ireland. The work consisted mainly of a massive pier or quay with an elegant lighthouse at the end. Nimmo's original estimate had been £20,000 but at the time of his death in 1832 £93,000 had been spent and the final cost was £108,000. By then (1837) the harbour had started to silt up, and the arrival of steam meant that the winding river could be negotiated easily, so the packet station was transferred to Waterford.[1]

However the existence of what for that time was a great sheltered harbour meant that Dunmore East was to gradually become an important fishing port.

In addition, the village has been a popular holiday resort for many years. The Haven Hotel, formerly the Villa Marina, was a holiday home built by the Malcolmsons,[2] who were involved financially in the American civil War. The Fisherman's Hall in the village was also built by the family.

The harbour is one of the five designated National Fishery Harbours, and has the second highest figure for fish landings after Killybegs.

Dunmore East is noted for:

The long established fishing industry is under threat from governmental restrictions designed to protect stocks. A plan has been developed (2005) by Waterford County Council to expand the harbour to accommodate more recreational marine activities. However that plan appears to have been shelved.

The village is home to the Waterford Harbour Sailing Club that has dinghy and keelboat sailing and the Dunmore East Adventure Centre, which has many watersports events for adults and children. Also there is the Dunmore East Sea Scouts one of the best scouting troops in the country.

Sea angling and Diving is catered for by Dunmore East Angling Charters.

Dunmore East is also home to some of the best seafood restaurants in Ireland.

Two principal hotels are located in Dunmore: The Ocean and The Haven. The Haven is of particular interest as it was the summer home of, from the days of English occupation, Lord Lieutenant of Waterford. That building is reported to be haunted.

The most popular event in Dunmore East is the annual bluegrass festival which takes place at the end of August. During this festival the village hosts a number of bluegrass groups over the weekend during which almost every bar becomes a music venue from 3pm until late in the evening.

Main article: List of twin towns and sister cities in the Republic of Ireland

Dunmore East is twinned with the village of Clohars-Carnoët in France.[citation needed]