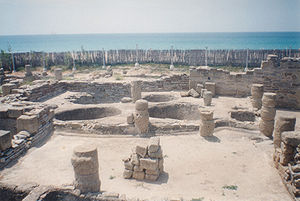 Factory of Garum at Baelo Claudia in Cádiz, Spain.

Garum, similar to liquamen,[1] was a type of fermented fish sauce condiment that was an essential flavour in Ancient Roman cooking, the supreme condiment.[2]

Although it enjoyed its greatest popularity in the Roman world,[3] it originally came from the Greeks, gaining its name from the Greek words garos or garon (γάρον), which named the fish whose intestines were originally used in the condiment's production. 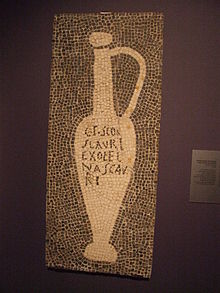 Pompeiian mosaic of a "flower of garum" pitcher with the titulus G(ari) F(los) SCON SCAURI EX OFFI(CI)NA SCAURI (from the villa of the garum importer Aulus Umbricius Scaurus).

For the Romans it was both a staple to the common diet and a luxury for the wealthy. After the liquid garum was ladled off of the top of the mixture, the remains of the fish, called allec, was used by the poorest classes to flavour their staple porridge. Among the rich, the best garum fetched prices for which the historian of food Maguelonne Toussaint-Samat found no parallel in caviar but rather with the precious essences used in perfumery.[4] Garum appears in most of the recipes featured in Apicius, a Roman cookbook, which also offers a technique to render palatable garum that had gone bad. The sauce was generally made through the crushing and fermentation in brine of the innards of various fishes such as mackerel,[5] tuna, eel, and others. While the finished product was apparently mild and subtle in flavor—the nobile garum of Martial's epigram[6]—the actual production of garum created such unpleasant smells as to become relegated to the outskirts of cities so that the neighbors would not be offended by the odour.

When mixed with wine (oenogarum, a popular Byzantine sauce), vinegar, black pepper, or oil, garum was served to enhance the flavor of a wide variety of dishes, including boiled veal and steamed mussels, even pear-and-honey soufflé. Diluted with water (hydrogarum) it was distributed to Roman legions. Pliny remarked that it could be diluted to the colour of honey wine and drunk;[7] as such a tonic, garum was also employed as a medicine—ancient Romans considered it to be one of the best cures available for many ailments, including dog bites, dysentery, and ulcers; additionally, it was used as an ingredient in cosmetics and for removal of unwanted hair and freckles. Garum was thought to ease chronic diarrhea and treat constipation.[8] 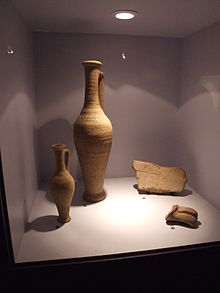 Garum was prepared from the intestines of small fishes, macerated in salt and cured in the sun for one to three months, where the mixture fermented and liquified in the dry warmth, the salt inhibiting the common agents of decay. The end product was very nutritious, retaining a high amount of protein and amino acids, along with a good deal of minerals and B vitamins.[8] According to archaeologist Timmy Gambin, garum also contained monosodium glutamate, making it an appetizing, addictive food additive.[9] It was common for fishermen to lay out their catch according to the type and part of the fish. This allowed makers to pick the exact ingredients they wanted.[10] Concentrated decoctions of aromatic herbs, varying according to the locale, were added—sometimes from in-house gardens.[10] A fine strainer was inserted into the fermenting vessel and the thick liquid was ladled out.

The manufacture and export of garum was an element of the prosperity of coastal Greek emporia from the Ligurian coast of Gaul to the coast of Hispania Baetica, and, Toussaint-Samat observes, an impetus for Roman penetration of these coastal regions.[11] Amphorae recovered from shipwreck sites off Ansérune and Agde bear the traces of the garum they contained and date as early as the fifth century BC. Umbricius Scaurus' production of garum put the ancient city of Pompeii on the map. The factories where garum was produced in Pompeii have not been found yet, which has led many researchers to believe that the factories lay outside the walls of the city. Each port had its own traditional recipe, but by the time of Augustus Romans considered the best to be garum from Cartagena and Gades in Baetica—garum sociorum, "garum of the allies".[11]

Seneca, holding the old-fashioned line against the expensive craze, cautioned against it, even though his family was of Baetian Corduba:

Do you not realize that garum sociorum, that expensive bloody mass of decayed fish, consumes the stomach with its salted putrefaction?
—Seneca, Epistle 95.

Today one can still see a garum factory at the Baetian site of Baelo Claudia in present-day Tarifa and Carteia in present-day San Roque in Spain. This Spanish garum was an export to Rome, and gained the towns a certain amount of prestige in their day. The garum of Lusitania (present-day Portugal) was also highly prized in Rome. It was shipped to Rome directly from the harbour of Lacobriga (present-day Lagos). A former Roman garum factory can be visited in the Baixa area of central Lisbon.[12] Fossae Marianae, located on the Southern tip of present day France, served as a distribution hub for Western Europe, including Gaul, Germania and to Britain.[13]

In 2008, archaeologists used the residue from garum found in containers in Pompeii to confirm the August date of the eruption of Mount Vesuvius, by detecting that it was made entirely of bogues, fish that congregate in the summer months.[14]