Windows Me was the successor to Windows 98 and, like Windows 98, was targeted specifically at home PC users.[3] It included Internet Explorer 5.5, Windows Media Player 7, and the new Windows Movie Maker software, which provided basic video editing and was designed to be easy to use for home users. Microsoft also updated the graphical user interface, shell features, and Windows Explorer in Windows Me with some of those first introduced in Windows 2000, which had been released as a business-oriented operating system seven months earlier. Windows Me could be upgraded to Internet Explorer 6 SP1 (but not to SP2 (SV1) or Internet Explorer 7), Outlook Express 6 SP1 and Windows Media Player 9 Series. Microsoft .NET Framework up to and including version 2.0 is supported, however versions 2.0 SP1, 3.x, and greater are not. Office XP was the last version of Microsoft Office to be compatible with Windows Me.

Windows Me is a continuation of the Windows 9x model, but with restricted access to real mode MS-DOS in order to speed up system boot time.[4] This was one of the most unpopular changes in Windows Me, because applications that needed real mode DOS to run, such as older disk utilities, did not run under Windows Me (although the system could be booted into real mode DOS using a bootable Windows Me floppy disk).

Compared with other releases of Windows, Windows Me had a short shelf-life of just over a year; it was soon replaced by the Windows NT-based Windows XP, which was launched on October 25, 2001.

At least 3 betas of Windows Me were available during its development phase. On September 24, 1999, Microsoft announced that Windows Millennium Beta 1 was released.[7] Windows Millennium Beta 2 was released on November 24, 1999, and added a couple of new features such as System File Protection and Game Options Control Panel. Several interim builds were released between Beta 1 and 2, and added features such as automatic updates and personalized menus. Beta 3 was released on April 11, 2000. The general availability date was December 31, 2000. Microsoft ended mainstream support for Windows Millennium Edition on December 31, 2003. Extended support ended on July 11, 2006. Windows 98 Extended support ended the same day.[8] Windows Me also contained the Microsoft Java Virtual Machine, which caused it and Windows 98 to be pulled from the Microsoft Developer Network at the end of 2003.[9] At launch time, Microsoft announced a time-limited promotion[10] from September 2000–January 2001 which entitled Windows 95 or Windows 98 users to upgrade to Windows Me for $59.95 instead of the regular retail upgrade price of $109.[10]

Shortly after Windows Me was released, Microsoft launched a campaign-initiative to promote Windows Me in the U.S., which they dubbed the Meet Me Tour. A national partnered promotional program featured Windows Me, OEMs and other partners in an interactive multimedia attraction in 25 cities across the U.S.[11] 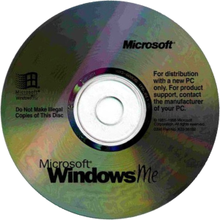 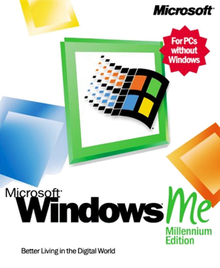 One of the most publicized changes from Windows 98 is that Windows Me does not include real mode MS-DOS.[4] According to Microsoft, with real mode support removed, Windows Me could potentially have faster reliable boot performance. [12]

The Config.sys and Autoexec.bat files are no longer read or executed during startup by IO.SYS. The command shell command.com is not executed and win.com is bypassed by direct execution of VMM32.VXD from IO.SYS. Because of these changes, the system can neither boot into an MS-DOS command prompt nor exit to DOS from Windows. Real mode drivers, such as ansi.sys cannot be loaded and older applications that require real mode do not run.

In Windows Me, the Autoexec.bat and Config.sys files are used only to set global environment variables. The two files (if present) are scanned for settings relating to the environment variables, and any other commands present are removed into a Windows registry key (see below). The two files thus contain only settings and preferences which configure the "global environment" for the computer during the boot phase or when starting a new MS-DOS Virtual Machine (VM).

To specify or edit other startup values (which, in Windows 98, would be present in the autoexec.bat file) the user must edit the following Windows registry key:

For troubleshooting and crash recovery, both the Windows Me CD-ROM and the Windows Me startup disk (a user-creatable floppy disk, known as the Emergency Boot Disk) allowed booting into real mode MS-DOS.

Windows Me was aimed exclusively at home users whereas previous versions of Win9x were expected to be used in an enterprise business setting. Several features of its predecessors did not work or were officially unsupported by Microsoft on Windows Me, including Automated Installation,[30] Active Directory client services,[31] System Policy Editor,[32] Personal Web Server and ASP not supported on Windows Me although it was supported on predecessors, Windows 98 and Windows 95.[33] A Resource Kit publication, targeted towards system administrators, was never published for Windows Me.

Other features removed or never updated to work with Windows Me included Microsoft Fax,[34] QuickView and DriveSpace.

Relation to other Windows releases

Windows Me was complemented by NT-based Windows 2000, which was aimed at professional users. Both operating systems were succeeded by Windows XP with their features unified. All Windows Me support, including security updates and security related hotfixes, was terminated on July 11, 2006. Support for Windows 98 and Windows 98 SE was also terminated on that date. Microsoft ended support for these products because the company considers them obsolete and running these products can expose users to security risks.[35]

Many third-party applications written for earlier editions of Microsoft Windows, especially older games, run under Windows Me but not under Windows 2000. This fact has become less relevant with the sharp decline in popularity of Windows Me after the release of Windows XP, which features a compatibility mode which allows many of these older applications to run.

If an installation CD-ROM from the Windows 2000 family is inserted into the drive of a computer running Windows Me, the user is prompted to upgrade to Windows 2000 because Windows Me has an older version number than Windows 2000. While this is not technically so (Windows Me was released several months after Windows 2000), Windows Me is in fact derived from the older, monolithic MS-DOS codebase (Windows 4.x) while Windows 2000 is the first of the NT 5.0 family, making the latter an upgrade.

Windows 2000 cannot, however, be upgraded to Windows Me. If an installation CD-ROM from Windows Me is inserted while running Windows 2000, the user will receive an error message that Setup cannot run from within Windows 2000. The user is prompted to shut down Windows 2000, restart the computer using Windows 95 or 98, or start MS-DOS and then run Setup from the MS-DOS command prompt.

Windows XP, which is NT-based, became the successor to Windows Me. It also closed the gap between consumer Windows and Windows NT. In addition, no service packs for Windows Me were released.

Along with Windows 2000 from the NT family, Windows Me was the last version of Windows that lacked Windows Product Activation.

Windows Me was the last operating system to be based on the Windows 9x (monolithic) kernel and MS-DOS.

The maximum amount of physical RAM in a PC that Windows Me supports is 1.5 GB.[37]