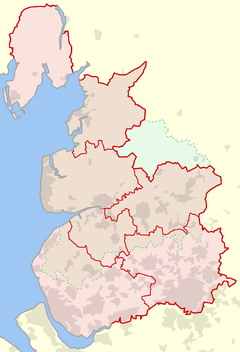 Lonsdale was a hundred of Lancashire, England.[1] For many decades, it covered most of the northwestern part of Lancashire around Morecambe Bay, including the detached part around Furness, and the city of Lancaster.

The name Lonsdale refers to the River Lune which flowed through the southern part of the hundred.

Places in the Lonsdale hundred included Lancaster, Bolton-le-Sands, Barrow-in-Furness, Dalton-in-Furness, Cockerham, Ulverston, and Morecambe. The Furness Peninsula was known as Lonsdale North of the Sands, the major part of which later constituted (from 1894 to 1974) the North Lonsdale Rural District.

Kirkby Lonsdale despite its name was not in the hundred as it lay in the Lonsdale Ward of Westmorland instead; and the villages of Burton-in-Lonsdale and Thornton-in-Lonsdale were within the West Riding of Yorkshire. These anomalies stem from the fact that the hundred once covered a larger area and is in fact more ancient than the county of Lancashire, being documented as part of Yorkshire in the Domesday Book.