The Dallow ward of Luton is a large area about one mile west of the town centre which has Dallow Road as its main artery. The recreation ground at the intersection of Brantwood Road and the open wooded hills beginning at Runley Road mark the boundaries of the area.

Some buildings in the area are to become part of Luton's Rothesay Preservation Area. The land was originally farmland and nearly all the buildings date from the late 19th century through to the 1920s. New enterprises such as Laporte's Chemical Works, the CWS cocoa works, Brown's Timberyard and the Davis gas stove factory were opened and the surrounding area was completed by 1920.

The Edwardian semi-detached houses of Brantwood Road, facing the park have an art deco style whilst those in Ashburnham Road include ornate balconies. The name of Rothesay is part of Luton's heritage, Rothesay Castle being the seat of the Earls and Marquesses of Bute, who stayed at Luton Hoo for many years during the eighteenth century and were also influential landowners.

The ward forms part of the parliamentary constituency of Luton South, and the MP is Gavin Shuker (Labour). Dallow is within the East of England (European Parliament constituency). :) 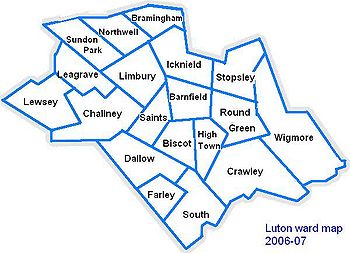 Two weekly newspapers are delivered free to all the houses in Dallow. However they are not specific to Dallow. They are: