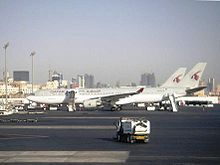 DOH is the main hub for Qatar Airways 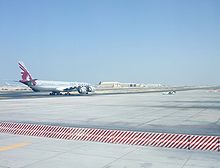 The airport suffers from overutilization even though the airport has been expanded numerous times. The current capacity stands at 12 million passengers per year.[4] Its 15,000 ft (4,600 m) runway is one of the longest at a civil airport. It is the main base of Qatar Airways. In the past, the airport was mostly used by Qatari holiday makers and foreign workers coming for the oil and gas sector. Now the airport is attracting more people such as holiday makers and transit travelers. It is also growing as Qatar Airways is expanding more rapidly. As of 2010, it was the world's 27th busiest airport by cargo traffic. The control tower and ancillary buildings were designed by Curtis W. Fentress, FAIA, RIBA of Fentress Architects.

The existing airport will be replaced in late 2011 or early 2012 when the first phase of New Doha International Airport is expected to open.

The airport is currently ranked as a 3-star by Skytrax.[5]

This is the main terminal at DOH and handles all economy class Qatar Airways flights as well as all other airlines using the airport. This terminal has been expanded several times in order to cope with the increasing number of passengers using the airport each year. The terminal has 44 satellite gates as well as spacious seating areas and a large duty free area. There are 3 lounges in this terminal including the Oryx Lounge, which is used by all airlines premium passengers, The Qatar Airways Gold Lounge which is used by Qatar Airways Gold Privilege Club members and the Qatar Airways Sliver lounge, used by Qatar Airways sliver privilege club card holders. This terminal is being expanded as the old Arrivals Terminal will soon be part of the departures terminal since a new arrivals terminal has opened. All departing and transferring passengers must use this facilties. Passengers arriving into Doha use the Arrivals Terminal.

The Departure and Transfer Terminal is set to open an additional 12 boarding located betweent the terminal and the Premium Terminal gates in the current months as well as a revamped Oryx lounge to cater for the increase in passenger numbers.

Terminal A of the Departure and Transfer Terminal is the check-in area used exclusively by the airport's biggest user, Qatar Airways. It is the current check-in area of the departure terminal.

Terminal B (All Foreign Airlines)

The Qatar Airways Premium Terminal was opened in 2006 and handles all Qatar Airways first and business class passengers. The terminal houses several five star facilities including a first class lounge, a business class lounge, a small medical center, a games room, several conference rooms, a spa and a duty free area. The terminal also has a spacious check in area. There are 6 gates in this terminal.

The present Doha International Airport has opened a new Arrival Terminal located in the western apron in the site of the former Asian Games temporary terminal on December 19, 2010. The terminal has a capacity of handling 2770 passengers per hour and has opened on December 19, 2010, with the first flight being QR 133 from Kuwait which landed at 11:30 AM. The 32,000 square meter arrival terminal has replaced the arrival hall of the present Doha Airport terminal. The terminal has 22 immigration counters, eight e-gates, eight baggage carousels, 36 concierge desks for hotel transfers, car rental and other services as well as 746 parking spaces. The current arrival hall will be merged with the departing hall, adding extra valuable space and capacity to the airport. These changes are part of the multi-million dollar expansion of Doha Airport to cope with the increasing traffic of Qatar Airways and other airlines before the new Doha International Airport opens in 2011.[6]

Panoramic image from the main terminal towards the VIP lounges (left), and planes of Qatar Airways with the skyline of Doha in the background 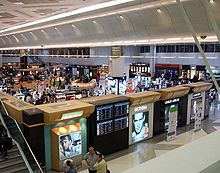 Privilege Club Gold members are welcome to enjoy the facilities in the Gold Lounge in the Main Terminal at Doha International Airport. This lounge includes a Business Center with free internet access, buffet dining services, newspapers and magazines, a smoking area, shower facilities and luggage storage.

Privilege Club Silver members can enjoy the facilities of the Silver lounge in the Main Terminal at Doha International Airport. This lounge includes a Business Center with free internet access, buffet dining services, newspapers and magazines and shower facilities. 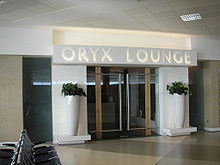 The Oryx Lounge for First and Business-class passengers

This lounge is a premium lounge that caters to Airlines’ First and Business Class passengers. It has a seating capacity of 164 passengers. Facilities at this lounge include business center, international fax facilities, a meeting room for 6 guests, Wi-Fi accessibility throughout the lounge, a nursery room, a cloak room, shower facilities, a smoking room and buffet dining.

Main airlines based at DOH

Since 1998, the number of passengers and total cargo load has significantly increased