A MEA Boeing 747 in old livery 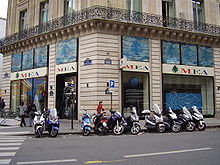 Middle East Airlines (MEA) is a member of the Arab Air Carriers Organization (AACO) and the International Air Transport Association (IATA). The airline expressed its interest in becoming a SkyTeam associate member in early 2006 at a press conference in New York.[7] On 28 February 2011, MEA airlines officially signed the partnership agreement with SkyTeam in an official ceremony in Beirut.

Middle East Airlines was founded on 16 May 1945 by Saeb Salam, with operational and technical support from BOAC. Operations started on 1 January 1946 using three de Havilland DH.89A Dragon Rapides on flights between Beirut and Nicosia, followed by flights to Iraq, Egypt, Syria, and Cyprus. Two Douglas DC-3s were acquired in mid-1946. Pan American World Airways acquired a stake and management contract in September 1949.

Pan Am was replaced when BOAC acquired 49% of MEA's shares in 1955. A Vickers Viscount was introduced in October 1955 while an Avro York cargo aircraft was leased in June 1957. On 15 December 1960 the first of four de Havilland Comet 4Cs arrived. After the association with BOAC ended on 16 August 1961, MEA was merged with Air Liban on 7 June 1963, which gave Air France a 30% holding, since relinquished. The full title was then Middle East Airlines – Air Liban.

The current name was adopted in November 1965 when the airline was completely merged with Air Liban. Although operations were interrupted by the 1967 Arab-Israeli war and by the Israeli raid on Beirut Airport in 1968, MEA restarted by acquiring a Convair 990A from American Airlines, which entered service on 24 June 1969.

A Boeing 747-200B entered service in June 1975 on the Beirut – London route and later on the Beirut-Paris-New York route from April 1983 until mid 1985. MEA had to adjust its operations to the realities of war in Lebanon between 1975 and 1991 and despite multiple closures of the base at Beirut International Airport, was able to continue operating against all odds. Airbus A310-300s were acquired in 1993 and 1994, followed by an A321-200 and the A330-200 (which replaced the A310s). From 1998 to 2002, MEA implemented its largest restructuring program ever which helped to turn it around from a loss making airline to a profitable one by 2003.

The airline has introduced self check-in kiosks at Beirut's international airport as of July 2010. The airline is also planning on launching the Arabesk Airline Alliance with six other Arab carriers. Their future plans include floating about 25% of their shares on the Beirut Stock Exchange (BSE) as part of a long-term plan to fully privatize the airline.

MEA offers only two classes of travel on all of its flights, Cedar Class (Business Class) and Economy Class. First and Premium Economy classes are not offered. 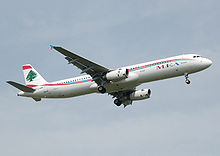 Moscow, Khartoum, Libreville, Luanda and Madrid have been mentioned as possible future destinations, Madrid being a former destination discontinued in 1995. In a meeting on January 20, 2010, the Lebanese tourism minister announced a deal in which MEA will be allowed to resume flights to Madrid as soon as the logistical matters are resolved.

MEA has codeshare agreements with the following airlines at August 2011: [10]

In October 2008, MEA announced that it was seeking up to eight Boeing 787 Dreamliners or Airbus A350s.[14] It has asked Airbus and Boeing to submit their offers for an order consisting of five firm aircraft and three options for delivery around 2017. The final decision will be made in late 2009 or early 2010. MEA is also in talks with Bombardier for smaller aircraft to be used on regional routes.

MEA's frequent-flyer program is called Cedar Miles and has three different tiers, Basic, Prestige, and Elite. Prestige and Elite members gain numerous benefits such as access to the Cedar Lounge at Beirut Rafic Hariri International Airport as well as outstation lounges at all MEA destinations.

Cedar Miles can be earned and redeemed on all MEA flights and all flights operated by Air France, KLM, and Qatar Airways. Cedar Miles can also be earned during stays at all Rotana Hotels and all Hertz car rentals worldwide.

MEA owns the following subsidiaries which are operated independently:

Founded in 1998, MEAS is responsible for the operation and maintenance of Beirut's Rafic Hariri International Airport conducting many services ranging from cleaning the terminal to de-rubberising the runways.

Founded in 1955, MASCO is the only fully fledged aircraft maintenance, repair, and overhaul provider at Beirut's Rafic Hariri International Airport. MASCO is a part 145 EASA-approved MRO with full airframe check capabilities on the Airbus A300, A310, A320, and A330 family of aircraft. In addition, MASCO is certified to performing painting for all types of aircraft. Besides MEA, main clients include Cyprus Airways.

In addition to the above three wholly owned subsidiaries, MEA owns 77.5% of the Lebanese Beirut Airport Catering Company (LBACC) which is the only catering provider at Beirut's Rafic Hariri International Airport