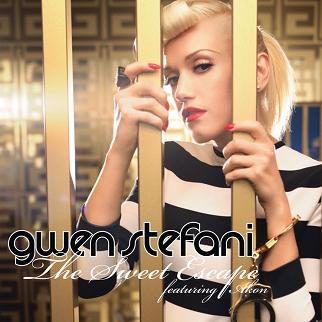 "The Sweet Escape" is a pop song written by , , and Giorgio Tuinfort for Stefani's second solo album "" (2006). Akon developed the song's beat before collaborating with Stefani. He designed it based on her previous work with , and Stefani later commented that it put her "on the to the No Doubt record I might do." [ [http://www.mtv.com/news/articles/1548004/20061214/rihanna.jhtml "For The Record: Quick News On Rihanna, Luda, Lady Sov, Kelis, Nas, Harry Potter, Angelina Jolie & More"] . . December 14, 2006. Retrieved December 25, 2006.] "The Sweet Escape", which features elements of , New Wave, and music, is an apology for a fight between two lovers and describes a dream of a pleasant life for them. As the album's , its title was chosen to help market Stefani's music and fashion lines.

The song generally received positive reviews from contemporary music critics, though there was a negative response to Akon's presence as a featured artist. "The Sweet Escape" was released as the album's second single in early 2007 (see ) and was commercially successful in mainstream and markets. It entered the top ten of most and topped the . The song was nominated for at the . In the song's accompanying , Stefani attempts to escape from a golden prison.

' CEO , who helped with for "The Sweet Escape", arranged the collaboration between Stefani and Akon.

When Akon was asked to work with Stefani, he reviewed her work, ranging from her music with No Doubt to her solo career. He noted that the sound Stefani had cultivated with No Doubt was missing from her solo work. Stefani, preoccupied with her baby Kingston Rossdale, cancelled their session and commented that she "didn't want to go through the pain of trying to work with someone [she] didn't know." Iovine called Stefani, telling her, "You can cancel everything else in your life, but don't cancel this session."

When they met, Akon played some of his tracks for her. They thought about words that would suit the marketing of Stefani's music and her clothing lines and , settling on "Sweet Escape". Akon played her the beat he had developed, and they began working on the song. They wrote it in ten minutes, coming up with a doo-wop song rather than the hip hop sound Stefani had expected.

"The Sweet Escape" is a pop song composed in the key of Bmusic|flat minor.

The song opens with an introduction which consists of eight measures of instrumentals, followed by eight measures in which Akon sings "Woohoo, yeehoo". is introduced in the middle of the first verse to produce a sequence of eighth note Bmusic|flat minor chords from Stefani's vocals. Stefani's voice is overdubbed again when she sings the chorus twice. Akon performs, and Stefani then sings the second verse and the choruses again. She returns to the latter part of the first verse and repeats the choruses. The song closes as Akon repeats the lines "Woohoo, yeehoo" and "I want to get away to our sweet escape" as the song fades.

The song's lyrics discuss an argument between spouses.

Akon's presence as a featured artist on the track received negative reviews. "" found that Akon contributed too few vocals to the song and that they were wasted. "" agreed, viewing the song a fumbled attempt to capitalize on the success of Akon's "" featuring . "" was displeased with his presence in lieu of higher profile hip hop artists such as and on Stefani's previous album "" (2005). It added that the song sounded like a "weirdly flat" version of Madonna's 1986 single "True Blue". [Flynn, Paul [http://observer.guardian.co.uk/omm/10bestcds/story/0,,1965630,00.html "Gwen Stefani, The Sweet Escape"] . "". December 10, 2006. Retrieved November 4, 2007.] "" described his vocals as "yelping". [Merwin, Charles. [http://www.stylusmagazine.com/reviews/gwen-stefani/the-sweet-escape.htm "Gwen Stefani - The Sweet Escape - Review"] . "". December 6, 2006. Retrieved November 4, 2007.]

The song's music video premiered on January 10, 2007 on . [Pastorek, Whitney. [http://popwatch.ew.com/popwatch/2007/01/gwen.html "Snap Judgment: Gwen Stefani's 'The Sweet Escape' video"] . "". January 10, 2007. Retrieved August 20, 2007.] The video opens with scenes of Stefani and the in a golden jail. After obtaining the key from a dog, they escape. Stefani is then shown in a penthouse two hours later. She lets down two long braids, allowing the Harajuku Girls to scale the building and cut off the braids. They meet Akon at a parking lot, and Stefani drives off with him. They are pursued by two of the Harajuku Girls as police officers, and the video closes with Stefani back in jail after two hours of chasing. The video is intercut with sequences of Stefani and Akon in front of a letter G in lights.

The video was filmed in December 2006, several days before .