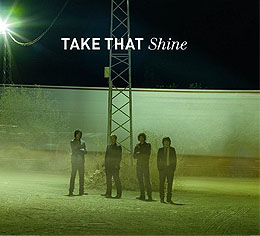 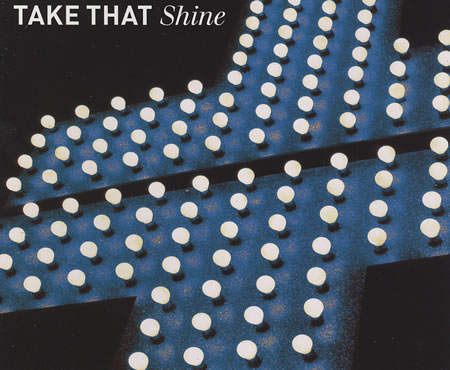 "Shine" was released on and features lead vocals by . The song is featured in several commercials for the relaunched supermarkets in the UK, fronted by actress , comedian , television presenter , gardener , singer , and television presenter . A 'live' version was recorded at a session with , and appears on the CD singles of "" and "Reach Out".

It became Take That's sixth consecutive number one single and its tenth number one overall, making them one of only seven acts in the history of the UK charts to have more than nine number one hits. It ended 2007 as the year's 18th biggest-selling single in the UK. The song also won Best British Single at the .

The songs main theme was based on ex-band member Robbie Williams, and his increasing problems regarding drugs. In an interview the band said how they wish him a speedy recovery, and how they would like to see him achieve his full potential.

The video for "Shine" was shown on on Thursday 2007 at 11:05 p.m. [ [http://www.take-that.co.uk/ns/news.php Take That News] ] The video was directed by Justin Dickel with a concept of recreating a style musical number [ [http://www.goldensq.com/news/stories/2007/Jan/takeThatShine Golden Square Post Production] ] .

The live version of "Shine" performed during the band's "Beautiful World" Tour in 2007 featured an intro that was taken from the finale to the song "Mr. Blue Sky" by the British pop/rock group "Electric Light Orchestra", taken from their album "Out of the Blue".

The single entered the at #84 (limited release), and made its official debut to the charts at #30 the following week, three weeks before its physical release. It reached number one on remaining for four weeks. The single peaked at number two on the download chart. During its first week at the top of the , the single rose from #20 to #2 on the Irish Singles Chart.