As of 2010, the most common type of wind turbine is the three-bladed horizontal-axis wind turbine (HAWT). This article deals with various types of wind turbine that differ from the standard type. Some types have had limited commercial use, while others have only been demonstrated or are only theoretical concepts with no practical applications.

Nearly all modern wind turbines uses rotors with three blades, but some use only two blades. This was the type used at GROWIAN, some other prototypes and several wind turbine types manufactured by NedWind. Eemmeerdijk Wind Park uses only 2-blade turbines. Turbines with two blades are manufactured by Nordic Windpower (Model N 1000) and by GC China.

Still something of a research project[1], the ducted rotor consists of a turbine inside a duct which flares outwards at the back. They are also referred as Diffuser-Augmented Wind Turbines (i.e. DAWT). The main advantage of the ducted rotor is that it can operate in a wide range of winds and generate a higher power per unit of rotor area. Another advantage is that the generator operates at a high rotation rate, so it doesn't require a bulky gearbox, so the mechanical portion can be smaller and lighter. A disadvantage is that (apart from the gearbox) it is more complicated than the unducted rotor and the duct is usually quite heavy, which puts an added load on the tower. The Éolienne Bollée is an example of a DAWT.

Two or more rotors may be mounted to the same driveshaft, with their combined co-rotation together turning the same generator — fresh wind is brought to each rotor by sufficient spacing between rotors combined with an offset angle (alpha) from the wind direction. Wake vorticity is recovered as the top of a wake hits the bottom of the next rotor. Power has been multiplied several times using co-axial, multiple rotors in testing conducted by inventor and researcher Douglas Selsam, for the California Energy Commission in 2004. The first commercially available co-axial multi-rotor turbine is the patented dual-rotor American Twin Superturbine from Selsam Innovations in California, with 2 propellers separated by 12 feet. It is the most powerful 7-foot-diameter (2.1 m) turbine available, due to this extra rotor.

When a system expels or accelerates mass in one direction, the accelerated mass will cause a proportional but opposite force on that system. A single rotor wind turbine causes a significant amount of tangential or rotational air flow to be created by the spinning blades. The energy of this tangential air flow is wasted in a single-rotor propeller design. To use this wasted effort, the placement of a second rotor behind the first takes advantage of the disturbed airflow. Contra-rotation wind energy collection with two rotors, one behind the other, can gain up to 40% more energy from a given swept area as compared with a single rotor. Much work has been done recently on this in the USA. A patent application dated 1992 exists based on work done with the Trimblemill.[2] Other advantages of contra-rotation include no gear boxes, auto centering on the wind - no yaw motors/mechanism required. Ability to be point suspended, thus reducing support structure overturning moments theoretical ability to be “grid linked” without electronics, thus giving the possibility of "arrays".

Counter-rotating turbines can be used to increase the rotation speed of the electrical generator. As of 2005, no large practical counter-rotating HAWTs are commercially sold. When the counter-rotating turbines are on the same side of the tower, the blades in front are angled forwards slightly so as to avoid hitting the rear ones. If the turbine blades are on opposite sides of the tower, it is best that the blades at the back be smaller than the blades at the front and set to stall at a higher wind speed. This allows the generator to function at a wider wind speed range than a single-turbine generator for a given tower. To reduce sympathetic vibrations, the two turbines should turn at speeds with few common multiples, for example 7:3 speed ratio. Overall, this is a more complicated design than the single-turbine wind generator, but it taps more of the wind's energy at a wider range of wind speeds.

Appa designed and demonstrated a contra-rotor wind turbine in FY 2000–2002 funded by California Energy Commission. This study showed 30 to 40% more power extraction than a comparable single-rotor system. Further, it was observed that the slower the rotor speed, the better the performance. Consequently, Megawatt machines benefit most. This also cancels the gyroscopic forces. There will be an improvement in overall efficiency. More information here http://www.worldofrenewables.com/page.php?pageid=65 Two files in the Linked In profile of Ferrand Stobart should be examined. contrawind02.pdf and trimblenotes.pdf both down loadable from the Box files

De Nolet is a wind turbine in Rotterdam disguised as a windmill.

The Aerogenerator is a special design of vertical axis wind turbine which could allow greater energy outputs.[4]

The "G" Model VAWT Turbine is equipped with three self-positioning Augmentation And Directioning Wings (AADW) placed as the outer sections of classical Darrieus blades. The GMWT can increase almost fivefold the efficiency of classical Darrieus Blades:[5] AADWs adjust themselves to the wind direction without any external power. The resulting combination ("G" Model Wind Turbine) works with very low cut-in wind speed, has self starting ability, together with a high capacity factor. Detailed information is available at: http://windturbine-performance.com/www/turkcegiris.htm [6]

Imagine a stack of CDs on a central shaft with a small air gap in between, the surface tension of moving air as it passes through the small gaps creates friction and using this energy causes the CDs to rotate around the shaft. The Fuller has addition vanes to help direct the air for improved performance, hence it isn't totally bladeless, as has been suggested. 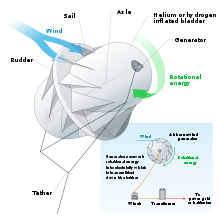 It has been suggested that wind turbines could be flown in high-speed winds using high altitude wind power tactics, taking advantage of the steadier winds at high altitudes. A system of automatically controlled tethered kites[8] could also be used to capture energy from high-altitude winds.

This is a vertical axis turbine, but it isn't favored because of its poor efficiency. One blade is pushed by the wind while the other is being pushed in the opposite direction. Consequently only one blade is working at a time [9]

Invented by Shawn Frayne. A belt vibrates by the passing flow of air. A magnet is mounted at one end of the belt. [10]

For an unusual way to induce a voltage using an aerosol of ionised water, see vaneless ion wind generator.

Another special type of wind turbines are the piezoelectric wind turbines. Turbines with diameters on the scale of 10 centimeters work by flexing piezoelectric crystals as they rotate, sufficient to power small electronic devices.[11]

A few proposals call for generating power from the otherwise wasted energy in the draft created by traffic.[12][13]

Designed by Imad Mahawili with Honeywell/WindTronics. This design uses many nylon blades and turns a permanent magnet generator inside out. The magnets are on the tips of the blades, and the stator is on the outside of the generator.[14]

Wind turbines may also be used in conjunction with a solar collector to extract the energy due to air heated by the Sun and rising through a large vertical Solar updraft tower. Wind turbines are part of experimental wave powered generators where air displaced by waves drives turbines.[15]

The great majority of wind turbines around the world belong to individuals or corporations who use them to generate electric power or to perform mechanical work. As such, wind turbines are primarily designed to be working devices. However, the large size and height above surroundings of modern industrial wind turbines, combined with their moving rotors, often makes them among the most conspicuous objects in their areas. A few localities have exploited the attention-getting nature of wind turbines by placing them on public display, either with visitor centers around their bases, or with viewing areas farther away.[16] The wind turbines themselves are generally of conventional horizontal-axis, three-bladed design, and generate power to feed electrical grids, but they also serve the unconventional roles of technology demonstration, public relations, and education.

Wind-turbines can be installed on the top of a roof of a building. This is not as common as may first be assumed. Some examples include Marthalen Landi-Silo in Switzerland, Council House 2 in Melbourne, Australia. Ridgeblade in the UK is like a vertical wind turbine on its side mounted on the apex of a pitched roof. Discovery Tower is an office building in Houston, Texas, that incorporates 10 wind turbines in its architecture.

The Museum of Science in Boston, Massachusetts began constructing a rooftop Wind Turbine Lab in 2009.[17] The Lab will test nine wind turbines from five different manufacturers on the roof of the Museum. Rooftop wind turbines may suffer from turbulence, especially in cities, which reduces power output and accelerates turbine wear.[18] The lab seeks to address the general lack of performance data for urban wind turbines.[17]

Due to the structural limitations of buildings, the limited space in urban areas, and safety considerations, wind turbines mounted on buildings are usually small (with nameplate capacities in the low kilowatts), rather than the megawatt-class wind turbines which are most economical for wind farms. A partial exception is the Bahrain World Trade Centre with three 225 kW wind turbines mounted between twin skyscrapers.