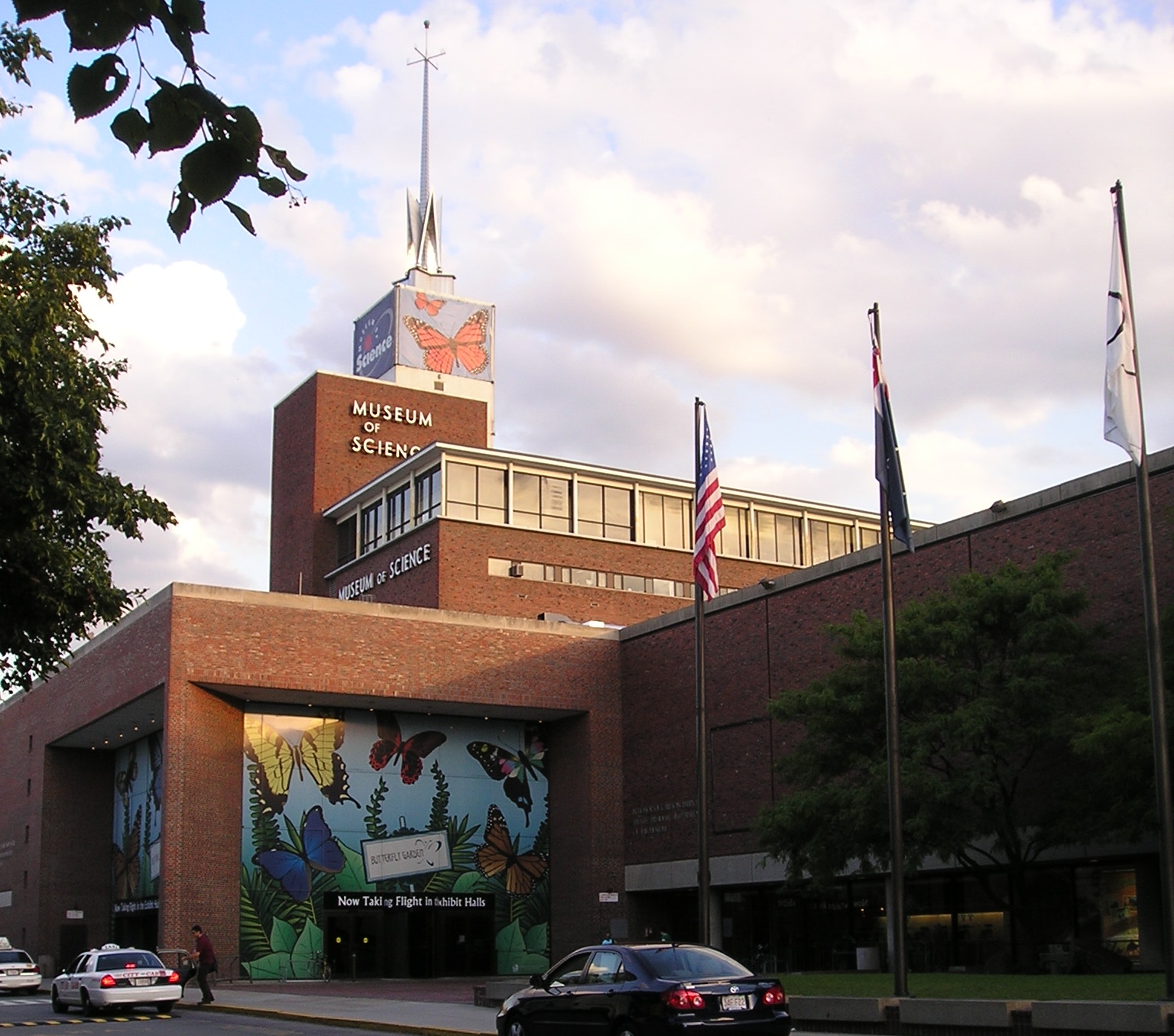 imagesize = 200
map_type =
map_caption =
latitude =42.367778
longitude =-71.070997
established = 1830
dissolved =
location =
type =
visitors =
director = Ioannis Miaoulis
curator =
publictransit = Science Park Station, MBTA
website = [http://www.mos.org http://www.mos.org] The Museum of Science (MoS) is a landmark, located in Science Park, a plot of land spanning the . Along with over 500 interactive exhibits, the Museum features a number of live presentations throughout the building everyday, along with shows at the Charles Hayden and the Mugar Omni theater, the only domed IMAX screen in . The Museum is also an accredited member of the (AZA) and is home to over 100 animals, many of which have been rescued and rehabilitated from various dangerous situations.

The Museum began as the Boston Society of Natural History in 1830, founded by a collection of men who wished to share scientific interests. In essence, the museum began as a place where these men could store and display skins and other trophies of their travels to and . Today, a number of taxidermed specimens remain on display, much as they do at the in New York, as well as many other museums, teaching children about the animals of New England and of the world. In 1864, after the Society had gone through several temporary facilities, a building was purchased in the area of the city and dubbed the "New England Museum of Natural History." There it remained through , presumably growing and changing over the decades into more of a science museum and less of a gentleman's club for safari trophies.

After the war, this building was sold, and the museum was reestablished under the name "Boston Museum of Science". Under the leadership of , the Society negotiated with the for a 99-year lease of the land now known as Science Park. The Museum pays $1 a year to the state for use of the land. Construction and development began in 1948, and the Museum opened in 1951, arguably the first all-encompassing science museum in the country. In these first few years, the Museum developed a traveling planetarium, a version of which is still brought to many elementary schools in the area every year. They also obtained during these early years "Spooky," a great horned owl who became a symbol or mascot of the Museum; he lived to age 38, the longest any great horned owl is known to have lived.

The Science Park MBTA station was opened in 1956, and the Charles Hayden Planetarium in 1958.

Many more expansions continued into the 1970s and 1980s. In 1999, The Computer Museum in Boston closed and became part of the Museum of Science, integrating some of its displays, although the collection moved to the in Mountain View, . [http://www.mos.org/tcm/tcm.html]

A major renovation and expansion took place during 2005 and 2006.

*In the 1950s, a small cloud chamber was featured in the main entrance hall. Visitors could come within inches of radioactive material to watch the vapor trails of the particles they emitted.
*A mechanical step-switching telephone system allowed visitors to see how a "modern" rotary-dial system worked.
*The first used in a lighthouse in the U.S. ( lighthouse), was on display from the early 1950s until 1979.

Although most of the "The Computer Museum" was moved to Silicon Valley and forms the current , some exhibits and objects were transferred to the Boston Museum of Science where two new computing and technology exhibits were created. One, The Computing Revolution, relates the history of computing through a variety of hands-on interactive exhibits, while the other, Cahners Computer Place, houses displays ranging from educational s to an interactive ERS-7.

*The Museum's Theater of Electricity contains one of the world's largest s, designed by Dr. himself and donated by MIT in 1956.

*The [http://www.mos.org/cst Current Science & Technology Center] 's live presentations are in a constant state of development, keeping up with the cutting edge of science & technology news, and offering several very informative and interesting "Updates in Science & Technology" presentations every day. CS&T presentations are also often aired on [http://www.necn.com/ New England Cable News (NECN)] . A CS&T is also available for [http://www.mos.org/cst/article/6140/1.html updates on-the-go] .
*The Museum is one of the city's two bases of operations for Boston s, which uses amphibious vehicles used in , to provide a twist on the typical non-amphibious bus tour.
*The Museum has developed a to-scale community that spans as far as the Riverside station. Models of the , Mercury and Venus are located on the Museum grounds.
*From August to October 2004, the Museum was host to the U.S. premiere of "" the Motion Picture Trilogy the Exhibition, developed by the Te Papa museum in , and containing many of the costumes and props from the films.
*The Museum of Science built and designed its own film-based exhibit, entitled . It was on display there from October 2005 to April 2006. The exhibit is now traveling.
*"Gunther von Hagens' 2: The Anatomical Exhibition of Real Human Bodies" was at the Museum of Science from July 29, 2006 to January 7, 2007.
* The human-powered aircraft hangs in the entry lobby of the museum as does , MIT's human-powered high-speed boat.