Cold case refers to a scene of a crime or an accident that has not yet been solved to the full and is not the subject of a recent criminal investigation, but for which new information could emerge from new witness testimony, re-examined archives, retained material evidence, as well as fresh activities of the suspect (e.g. repeated deaths of wives of a suspect, who marries a lady and then does away with her for insurance gain). New technical methods developed after the case can be used on the surviving evidence to re-analyze the causes, often with conclusive results.

Characteristics of a criminal cold case

Typically, cold cases are violent or other major felony crimes, such as murder or rape which unlike unsolved minor crimes are generally not subject to a statute of limitations.

Sometimes disappearances can also be considered cold cases if the victim has been not seen or heard from for some time, such as the case of Natalee Holloway.

In about 35% of those cases are not really cold cases at all. Some cases become instantly cold when a seeming closed (solved) case is re-opened due to the discovery of new evidence pointing away from the original suspect(s). This happens in a surprising number of cases, and is the result of a miscarriage of justice. Other cases are cold when the crime, usually through discovery of human remains, is discovered well after the fact.[1] Other cases are classified cold cases when a case that had been originally ruled an accident or suicide is re-designated a murder when new evidence emerges.

The John Christie murders is a classic case, when Timothy Evans was wrongly executed for the alleged murders of his wife and child. Many other bodies were later found in the house where they lived with Christie, and he in turn was executed for those crimes. The case helped a campaign against capital punishment in Britain.

A case is considered unsolved until a suspect has been identified, charged, and tried for the crime. A case that goes to trial and does not result in a conviction can also be kept on the books pending new evidence.

Often a case is not solved but forensic evidence helps to determine that the crimes are serial crimes. The BTK case and Original Night Stalker (still unsolved) cases are such examples.

Sometimes a viable suspect has been overlooked or simply ignored due to then-flimsy circumstantial evidence, the presence of a likelier suspect (who is later proven to be innocent), or a tendency of investigators to zero in on someone else to the exclusion of other possibilities (which goes back to the likelier suspect angle) -- known as "tunnel vision":

With the advent and improving DNA testing and other forensics technology, many cold cases are being re-opened and prosecuted. Police departments are opening cold case units whose job is to re-examine cold case files. DNA evidence helps in such cases but as in the case of fingerprints, it is of no value unless there is evidence on file to compare it to. 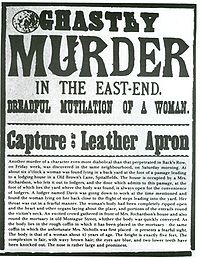 A leaflet issued during the 'autumn of terror' 1888 when Jack the Ripper was active.

Fallen Tay Bridge from the north

The identity of Jack the Ripper is a notorious example of an outstanding cold case, with numerous suggestions as to the identity of the serial killer. Similarly, the Zodiac Killer has been studied extensively for 40 years with numerous suspects discussed and debated. The perpetrators of the Wall Street bombing of 1920 have never been positively identified, though the Galleanists, a group of Italian anarchists, are widely believed to have planned the explosion. The burning of the Reichstag building in 1933 remains controversial and although Marinus van der Lubbe was tried, convicted and executed for arson, it is possible that the Reichstag fire was perpetrated by the Nazis to enhance their power and destroy democracy in Germany.

Many disasters and accidents remain obscure, especially involving major fires, where any evidence of how they started is destroyed by the fire itself. They include the King's Cross fire of 1987 and the Bradford City stadium fire of 1985 in Britain. The causes of many early railway accidents are often obscure although they can sometimes be inferred from later research, such as the Versailles train crash of 1842 and the Tay Bridge disaster of 1879. The French disaster was one of the first major rail accidents and caused the deaths of at least 55 passengers when two locomotives derailed and the carriages piled into them and one another. They were then set on fire by coals from the engine, and passengers could not escape because the carriage doors were locked.

The first Tay rail bridge collapsed in a storm on the evening of December 28, 1879, and an entire express train fell into the river below the bridge. It is still one of the worst structural failures in Britain. It is likely that metal fatigue in critical components contributed and the parts broke suddenly, precipitating disaster. Many key joints were also loosened by the vibrations of trains passing overhead. The public inquiry in 1880 concluded that the bridge was "badly designed, badly built and badly maintained".

The wheel axles were the weak link on the Versailles locomotive, and the lugs holding the tie bars on the Tay bridge. The same fatigue theory may explain the Boston Molasses disaster of 1919, when a large storage tank suddenly failed, releasing a wave of molasses onto the dockside in Boston, Massachusetts. It killed 21 people, including a fire fighter from an adjacent firehouse.

The loss of the RMS Titanic has also been revisited following the discovery of the remains of the ship at the bottom of the Atlantic. Modern analysis of the steel appears to show that the wrought iron rivets used to fasten the steel sheet of the hull were weaker than expected. When the ship received a glancing blow from the iceberg, they failed sequentially and allowed seawater to pour through the gaps between the plates of the hull.