Molasses
Not to be confused with molasse. 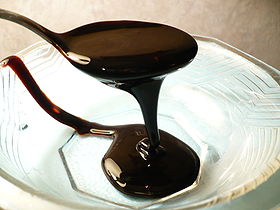 Thick blackstrap molasses slowly pours from an overfilled spoon to a dish below.

Molasses is a viscous by-product of the processing of sugar cane, grapes or sugar beets into sugar. The word molasses comes from the Portuguese word melaço, which ultimately comes from mel, the Latin word for "honey".[1] The quality of molasses depends on the maturity of the sugar cane or sugar beet, the amount of sugar extracted, and the method of extraction. Sweet sorghum syrup is known in some parts of the United States as molasses, though it is not true molasses.

A bottle of molasses.

Sulphured molasses is made from young sugar cane. Sulphur dioxide, which acts as a preservative, is added during the sugar extraction process. Unsulphured molasses is made from mature sugar cane, which does not require such treatment. There are three grades of molasses: mild or barbados, also known as first molasses; dark, or second molasses; and blackstrap. These grades may be sulphured or unsulphured.

To make molasses, the cane of a sugar plant is harvested and stripped of its leaves. Its juice is extracted usually by crushing or mashing, but also by cutting. The juice is boiled to concentrate it, which promotes the crystallisation of the sugar. The result of this first boiling and of the sugar crystals is first molasses, which has the highest sugar content because comparatively little sugar has been extracted from the source. Second molasses is created from a second boiling and sugar extraction, and has a slight bitter tinge to its taste.

The third boiling of the sugar syrup makes blackstrap molasses. The term is an Americanism dating from around 1920. The majority of sucrose from the original juice has been crystallized and removed. The calorie content of blackstrap molasses is still mostly from the small remaining sugar content.[2] However, unlike refined sugars, it contains trace amounts of vitamins and significant amounts of several minerals. Blackstrap molasses is a source of calcium, magnesium, potassium, and iron; one tablespoon provides up to 20% of the daily value of each of those nutrients.[3] Blackstrap has long been sold as a health supplement. It is also used in the manufacture of ethyl alcohol for industry and as an ingredient in cattle feed.

Molasses coming from sugar beet is different from sugar cane molasses. Only the syrup left from the final crystallization stage is called molasses; intermediate syrups are referred to as high green and low green, and these are recycled within the crystallization plant to maximize extraction. Beet molasses is about 50% sugar by dry weight, predominantly sucrose, but also contains significant amounts of glucose and fructose. Beet molasses is limited in biotin (Vitamin H or B7) for cell growth; hence, it may need to be supplemented with a biotin source. The nonsugar content includes many salts, such as calcium, potassium, oxalate, and chloride. It also contains the compounds betaine and the trisaccharide raffinose. These are either as a result of concentration from the original plant material or as a result of chemicals used in the processing, and make it unpalatable to humans. Hence it is mainly used as an additive to animal feed (called "molassed sugar beet feed") or as a fermentation feedstock.[citation needed]

It is possible to extract additional sugar from beet molasses through a process known as molasses desugarisation. This technique exploits industrial-scale chromatography to separate sucrose from nonsugar components. The technique is economically viable in trade-protected areas, where the price of sugar is supported above the world market price. As such, it is practiced in the U.S.[4] and parts of Europe. Molasses is also used for yeast production.

Cane molasses is a common ingredient in baking, often used in baked goods such as gingerbread cookies. There are a number of substitutions that can be made for molasses. For a given volume of molasses, one of the following may be used (with varying degrees of success):

In the cuisines of the Middle East, molasses is produced from several other materials such as carob, grapes, dates, pomegranates, and mulberries.

Because of its unusual properties, molasses has several uses beyond that of a straightforward food additive.

Other food and consumption derivatives

It has no protein, fibers or fat