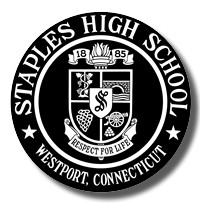 For comparison purposes with similar schools, the state Department of Education classifies schools and communities in "District Reference Groups", defined as "districts whose students' families are similar in eduation, income, occupation and need, and that have roughly similar enrollment".Fact|date=June 2008 Westport is one of eight school districts in District Reference Group A (others are Darien, Easton, New Canaan, Redding, Ridgefield, Weston, and Wilton). [ [http://discovery.wcgmf.org/communities_bydrg.html] Web page titled "Find a Community: By Educational Reference Group (DRG)" at the "Discovery 2007 / An initiative of the William Caspar Graustein Fund" Web site, accessed , ]

Staples High School was originally built in 1884 by Horace Staples, a high-wealth savvy trader, who built a three-story brick building on Riverside Avenue, just south of downtown . The building contained several classrooms, a science laboratory, and a library.In 1937, a new wing opened up just north of the original building, containing many new classrooms but still no or nasium (those were included in a 1947 expansion).

In 1958, to follow the expansion of the community, the school moved to a new site on North Avenue. This new facility contained a gymnasium, cafeteria and an auditorium, which was an impressive structure at the time. Its design was unique for the area, utilizing separate buildings with students walking outside between classes, creating an open atmosphere similar to a college campus.

However, the open air walkways between buildings were inconvenient in the Connecticut winters, forcing students to wear their coats to classrooms during much of the school year. There were also concerns raised about student safety from the open, almost college-like campus that allowed easy and unrestricted access to and from the school by both students and non-students. Most importantly, as time passed from the original 1958 construction, the athletic, laboratory, and other facilities of Staples fell increasingly behind the more modern schools being built by neighboring towns. To address these shortcomings a project was launched at the school between 1978 and 1981, the centerpiece of which was a large number of physical education facilities, such as a new , , and , as well as a series of enclosed corridors linking the buildings to protect students from the elements.

In 2003, several years of planning for yet another construction project at the school were completed and began on of that year on an $80 million project to renovate and expand the school into a brand-new facility. During this project, many of the original buildings were as the new school was built on their original footings. The project was completed in September 2006.

*"" actor is a 1957 graduate of Staples and former Staples Player.

*In 2004 the "" listed Staples among the best public and private schools in the .

*Staples' drama department, Staples Players, has received many awards for its mainstage productions, including numerous awards. It was headed by the widely acclaimed Al Pia until he retired from the Westport School System in 1996. The program is currently run by David Roth.

*Former MLS player is a 1999 graduate of Staples.

*Director and Co-Founder of The Orchard Project and Old Vic/ New Voices, Ari Edelson, is a former Staples Player and 1994 graduate of Staples High School

*The Staples Players were the first high school drama group in the country to adapt Stanley Kubrick's film "Dr. Strangelove" into a stage play.

*Actress Alisan Porter, star of "Curly Sue" and cast in the Broadway revival of "A Chorus Line" is a former Staples Player

*, , The Yardbirds, Sly and the Family Stone, and Peter Frampton, (amongst others) played on the Staples Stage in the 1960s and 1970s

In the 2007-2008 year at Staples, the school participated fairly successfully in several competitions. These include:
*Five semi-finalists and one regional finalist in the .
*A finalist in the .
*First place in the 2006 amongst 160 high schools in the Tri-State Area; the team of four received a $20,000 scholarship for first place in the competition.
*Five National Merit Scholarship finalists for 2006
*Four National Merit Scholarship finalists in 2007
*A three person Staples High School team placed second in the State at the Connecticut Geographic Alliance's 17th annual Geographic Competition.
*The Staples High Engineering Team (SHET) placed second in the National Engineering Design Challenge (for the 2005-2006 and 2006-2007 academic years).
*The Staples Engineering Team received a $6,000 dollar grant from MIT to develop one of its projects.
*The Staples rugby team made it to the semi-finals in the 2008 Connecticut State Rugby Tournament
*The Staples Men's Volleyball team has won 7 out of the last 8 CIAC State Championships, their most recent one coming in spring of 2008
*The Staples Men's Indoor Track and Field team won it's 9th consecutive indoor track state championship in the 2007-2008 track season, having won every year since 2000.

The first expansion project came in 1937, which included a two-story building with classrooms. It is what is now the front of Saugatuck Elementary School.

Ten years after that, another expansion was built, including a Cafeteria and Gymnasium.

When the school moved to North Avenue in 1958, it consisted of seven separate buildings labeled 1 through 8 (buildings 2 and 3 (Gym/Cafeteria) were together). In 1964, a two-story ninth building was constructed at the south end of the campus.

In 1974, heating pipe problems prompted a project to fix the system.

From 1978 to 1981, the school was under a project. It included the following construction:
*Redoing of Building 1 to include the Senior Center and Health classes
*Extra music rehearsal room
*New guidance wing (Guidance was before within the main office)
*New Deans office
*New Student Center
*Re-doing of the North Courtyard
*Fieldhouse
*Pool
*Redesign of building exteriors with sheetrock and bricks
*Connector hallways between all buildings

Beginning on , and officially ending on , the campus was reconstructed. For the cost of $84 million, an entirely new 32,000 square meter (330,000 square foot) facility was built.