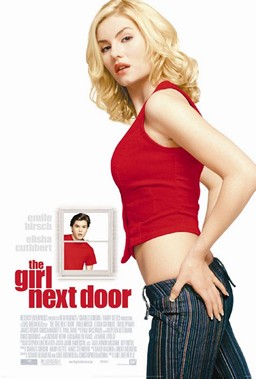 An ambitious Westport High School senior, Matthew Kidman (), dreams of a career in politics. He plans to attend if he can get a big upcoming scholarship. He begins a relationship with his beautiful new neighbor Danielle (), but soon discovers through his porn-addicted friend Eli () that she used to be an adult film actress known by her fans as "Belle".

Matthew and his friends follow Danielle and find her performing at an adult film convention where Kelly menacingly warns Matthew not to interfere with his business. When Matthew convinces Danielle not to rejoin the industry, Kelly abducts Matthew from school and physically assaults him, saying that Danielle's failure to arrive on set has cost him $30,000. Kelly offers to let him erase his debt by breaking into rival producer Hugo Posh's home to steal an award statuette, but after Matthew has entered the house Kelly calls in a robbery report and leaves the premises. Matthew narrowly avoids the police and rushes to his scholarship dinner. High on ecstasy that Kelly told him was aspirin, he improvises a deeply sentimental speech but loses the scholarship due to his outrageous behavior.

Kelly then gets his money back by withdrawing $25,000 from an account Matthew opened to bring Samnang, a brilliant Cambodian student, to study in the United States (not wanting to explain his connections to the adult film industry, Matthew had previously introduced Kelly to the bank staff as his student adviser). Fearing that he will face expulsion or criminal charges for his unwitting role in the fraud, he turns to Danielle for help. Danielle calls in a few friends from her days as a porn star, and they agree to make a video for Hugo Posh on prom night and on school grounds. After the successful shoot, and after Eli has been dropped off with the tape's master copy, Danielle and Matthew make love for the first time in their limousine.

The next morning Matthew is shocked to discover Kelly, in possession of the tape he has stolen from Eli's home, with his parents and school principal at the dining room table. Kelly asks to speak privately with Matthew, then tells him that unless he is given half of all profits he will play the tape immediately. Matthew refuses because the money rightfully belongs to Samnang. Kelly repeats his threat, and Matthew says that he no longer cares about his now-ruined future. As the tape begins to play, it becomes clear that Matthew and his friends have made a progressive, comprehensive sex ed tape rather than a pornographic film. With no more cards left to play, Kelly finally admits defeat.

In the film's closing montage, we learn the fates of the film's central characters, including Kelly, Eli, and Matthew's friend Klitz. Hugo Posh and Matthew make millions from the video, although Matthew serves as Posh's "silent partner" and his involvement is largely kept secret. Posh keeps his word and pays for Samnang to come to the USA, while Matthew has enough money to attend Georgetown and take Danielle to DC with him. Matthew's story ends with him getting the girl of his dreams and a chance at the future he has always wanted.

Project began development at the end of 1999 with the first draft of the script delivered in early 2000. Christopher McKenna, who is mentioned in the director's commentary on the DVD, is responsible for the basic story structure and plot of the completed movie (due to a arbitration hearing, he was stripped of all credit. Furthermore, according to Eli Roth (Hostel, etc.) in an interview on June 5, 2007 on KITS "LIVE 105" (based in San Francisco, California), Chris McKenna got the story idea and the actual dialogue from conversations Chris had with Eli while Eli was in the editing studio for one of his movies. Eli Roth actually did date "the porn star next door" among others, and Chris listened to his stories and turned it into this movie without crediting Eli. This claim however does not hold up when researching the actual development of the film. Agent Don Buchwald approached his producer friend Harry Gittes in 1999 about an episode of Howard Stern's radio show in which a high school student was set up with a porn star. Gittes brought the project to Charles Gordon, whose executive Marc Sternberg supervised a script originally written by David Wagner and Brent Goldberg. McKenna's involvement was at the behest of director Luke Greenfield, who collaborated on the script with him (also uncredited). David Kartch was previously attached to direct, but dropped out and was replaced by in 2002. Producers Charles Gordon and Marc Sternberg, as well as studio executive Peter Cramer, had earlier worked together as the producers of (1999), which also featured a teenager's attempts at .

According to the DVD commentary, the character of Eli is based on writer/director . Much of the production staff make direct appearances within the film, as does Luke's mother, his assistant, the producer, and the producers' assistants. Additionally, the prom in the film takes place in the cafeteria, much in the same way as the director's. These elements bestow a considerable personal touch on behalf of the production staff on the film. All scenes showing topless models were also shot in PG-13 versions. Other locations included Santa Clarita (many school scenes shot at the in Valencia), , the Masonic Lodge of Pasadena, Long Beach, and (including a porn convention sequence shot at the Ren-Mar studios on Cahuenga Boulevard). The first kiss between Matthew and Danielle was shot on March 10, 2003 in the backyard of a house on Capri Drive north of Sunset Boulevard in . It was the first shot of a night that began at 8pm and ended at 5am. Unusually for the area, temperatures dipped into the high 30s, necessitating that portable gas heaters be brought in for the actors and extras.

Shooting in was briefly halted to retrieve one of the s which was meant to attack Hirsch but instead flew up a nearby tree. As Hirsch was still a minor during production, all of his nude scenes were performed by a stunt double. For a lap dance scene, several pillows were placed between him and the dancer [ [http://www.imdb.com/title/tt0265208/trivia The Girl Next Door (2004) - Trivia ] ] . Despite all this consideration, it is noted that the champagne drunk in the limo by the underage actors near the end of the movie was real. Two extras were injured during shooting at Ren-Mar studios in Hollywood, CA, during the scene where Matt "Horshu" Wiese chases the two sidekicks. Hirsch himself was hurt whilst filming a fight sequence with Timothy Olyphant.

Principal photography ended in late March but two days of pickups, mostly comprising the scenes from the opening montage, were shot in Santa Clarita on April 24 and 25. The first cut of the film ran 120 minutes, which was later cut to 106 minutes. There are several rare versions of the one-sheet, in which Hirsch's inset character wears a blue rather than red shirt, and others in which the uncredited Christopher McKenna is given a "Screenplay By" credit alongside Stuart Blumberg and Luke Greenfield. In these versions, original screenwriters David Wagner and Brent Goldberg receive "Story By" credit. This one-sheet, however, was not released to theaters. Budgeted at $19.9 million, the final project costs were $21 million.

The original release date was intended to be March 5, 2004, but was moved to April 9, 2004, which happened to be , As a play on the title of a competing film, , a marketing executive offered the tagline "This Easter, experience a different kind of 'Passion'." This suggestion, however, was quickly shot down by studio brass. Despite security precautions, the film appeared in pirated versions on the Internet before its release, primarily due to extensive preview screenings. A high quality DVD transfer was also leaked before the home video release, which also was available for download through file sharing software.

*Actresses and are both real-life "" models.
*"" contestant appeared in the audience during the auditorium scene.
* and were also originally slated to appear in this film. Briana Banks does make an appearance, however, as the woman shown in the magazine at the beginning of the film.
*The lips seen in the opening shot of the film are those of .
*David Daskal from ": Hawaii" (2004) appears in the beginning of the movie in a group of students and later on as a student in the classroom.
*Professional wrestler has a cameo as Mule, the boyfriend of one of the porn actresses during the Adult Film Convention sequence.
*The Cougars lion costume featured in numerous scenes of the film is the same as that featured in "Old School" (2003), in which Elisha Cuthbert also appeared. In this film it is credited as the "Harrison Cougar."
*The director makes an appearance in the montage at the film's end as a porn director.
*The producers are visible in the waiting room of the airport scene.
*The director's mother appears in the scholarship banquet scene.
*The producer's assistants appear as Yale college students watching a sex-ed film at the end of the movie. One of Luke Greenfield's assistants also appeared in the cafeteria at the beginning of the film, implying that this fellow high school graduate also ended up going to college with Klitz's character.

In the scene-specific DVD audio commentary for the film Emile Hirsch reveals that when shooting the scene where Elisha Cuthbert forces him to strip, director Luke Greenfield wanted him to shave his chesthair but Hirsch who was 17 at the time refused because, as he himself puts it, "did not wanna shave off my manhood".The plot structure of this film draws many parallels to the 1983 film, "".