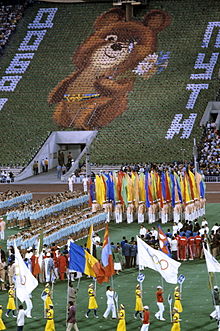 Misha (Russian: Миша), also known as Mishka (Russian: Мишка) or The Olympic Mishka (Russian: Олимпийский Мишка) is the name of the Russian Bear, the mascot of the 1980 Moscow Olympic Games (the XXII Summer Olympics). He was designed by children's books illustrator Victor Chizhikov.

Misha is the first mascot of a sporting event to achieve large-scale commercial success as merchandise. The Misha doll was used extensively during the opening and closing ceremonies, had a TV animated cartoon and appeared on several merchandise products, now things commonly practiced not only in the Olympic Games, also in the FIFA World Cup and others events' mascots.

Misha also appeared in the 1980 Olympics episode of the Russian cartoon Nu, pogodi!, handing trophies to the Wolf and the Hare.

Origins of the name Misha

In Russian, Misha is a diminutive for the Russian male name Mikhail (Michael). Most bears appearing in Russian fairy tales have this name, because it is similar to the Russian Mishka, the diminutive of Медведь (Mjedvjed, Bear).

In 1977, the committee organizing the Olympics held a contest for the best illustration of a bear. The judges chose Victor Chizhikov's design depicting a smiling bear cub wearing a blue-black-yellow-green-red (colors of the Olympic rings) belt, with a golden buckle shaped like the five rings. Misha was confirmed as an official mascot on December 19th, 1977.

During the closing ceremony of the 1980 Olympic Games, Misha the bear appeared with a tear in its eye.

In 1988, in connection with the 60th anniversary of Mickey Mouse, a special magazine was produced in which Mickey Mouse and Misha met.[1]