Multiple system atrophy (MSA) is a degenerative[1] neurological disorder. MSA is associated with the degeneration of nerve cells in specific areas of the brain. This cell degeneration causes problems with movement, balance and other autonomic functions of the body such as bladder control or blood pressure regulation. The cause of MSA is unknown and no specific risk factors have been identified.[2] Around 55% of cases occur in men, with typical age of onset in the late 50s to early 60s.[3]

MSA is characterized by a combination of the following, which can be present in any combination:[5][6]

When autonomic failure predominates, the term Shy-Drager syndrome is sometimes used, although this term is no longer current, given the terminology changes which are explained below.[7] This syndrome was named after Dr Milton Shy and Dr Glenn Drager, who identified it in 1960, but the American Autonomic Society and the American Academy of Neurology redefined it as multiple system atrophy with autonomic phenomena in 1996.[8][9][10]

A variant with combined features of MSA and Lewy body dementia may also exist.[11]

The most common first sign of MSA is the appearance of an "akinetic-rigid syndrome" (i.e. slowness of initiation of movement resembling Parkinson's disease) found in 62% at first presentation. Other common signs at onset include problems with balance (cerebellar ataxia) found in 22% at first presentation, followed by genito-urinary problems (9%). For men, the first sign can be erectile dysfunction (inability to achieve or sustain an erection). Both men and women often experience problems with their bladders including urgency, frequency, incomplete bladder emptying or an inability to pass urine (retention). About 1 in 5 MSA patients will suffer a fall in their first year of disease.[3]

These common first signs are the same as those of subacute combined degeneration of the spinal cord, which is caused by vitamin B12 deficiency: Patients present with weakness of legs, arms, trunk, tingling and numbness that progressively worsens. Vision changes and change of mental state may also be present. Bilateral spastic paresis may develop and pressure, vibration and touch sense are diminished. A positive Babinski sign may be seen. Prolonged deficiency of vitamin B12 leads to irreversible nervous system damage Vitamin B12 should be tested directly; it cannot be ruled out by a complete blood count. In the age of folic acid fortification, patients will not have macrocytic anemia. http://jnnp.bmj.com/content/65/6/822.abstract

As the disease progresses three groups of symptoms predominate. These are:

Other symptoms such as double vision can occur.[13] Not all patients experience all of these symptoms.

Some patients (20% in one study) experience significant cognitive impairment as a result of MSA.[14]

MSA usually progresses more quickly than Parkinson's disease.[15] There is no remission from the disease. The prevalence of MSA varies by study from between 3 and 20 in 100,000 people. The remaining lifespan after the onset of symptoms in patients with MSA is between 7.3 and 9.3 years. This disease is more common in men than women, with studies showing ratios ranging from between 1.4:1[16] to ratios as high as 1.9:1.[5] Some believe that the higher ratio may be due to greater environmental exposure to putative toxins in men, or difference in endogenous protective factors (hormonal) in women.[6] Almost 80% of patients are disabled within 5 years of onset of the motor symptoms, and only 20% survive past 12 years.[17] Rate of progression differs in every case and speed of decline may vary widely in individual patients.

O’Sullivan and colleagues (2008) identified early autonomic dysfunction to be the most important early clinical prognostic feature regarding survival in MSA. Patients with concomitant motor and autonomic dysfunction within 3 years of symptom onset had a shorter survival duration, in addition to becoming wheelchair dependent and bed-ridden at an earlier stage than those who developed these symptoms after 3 years from symptom onset. Their study also showed that when patients with early autonomic dysfunction develop frequent falling, or wheelchair dependence, or severe dysphagia, or require residential care, there is a shorter interval from this point to death.[18] 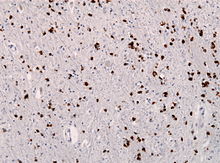 Diagnosis of MSA can be challenging because there is no test that can definitively make or confirm the diagnosis in a living patient. Certain signs and symptoms of MSA also occur with other disorders, such as Parkinson's disease, making the diagnosis more difficult.[19]

A definitive diagnosis can only be made pathologically on finding abundant glial cytoplasmic inclusions in the central nervous system.[20]

There is no discovered cure for MSA, so treatment involves treating the symptoms.

Ongoing care from a neurologist specialized in "movement disorders" is recommended as the complex symptoms of MSA are often not familiar to less-specialized health care professionals.

One particularly serious problem, the drop in blood pressure upon standing up (with risk of fainting thus injury from falling) often responds to fludrocortisone, a synthetic mineralocorticoid. Another common drug treatment is midodrine (an alpha-agonist.) Non-drug treatments include "head-up tilt" (elevating the head of the whole bed by about 10 degrees), salt tablets or increasing salt in the diet, generous intake of fluids, and pressure (elastic) stockings. Avoidance of triggers of low blood pressure (e.g. hot weather, alcohol, dehydration) are crucial.[21]

Hospice/homecare services can be very useful as disability progresses.

Levodopa (L-Dopa), a drug used in the treatment of Parkinson's disease, fails to improve the parkinsonian symptoms of most MSA patients. A recent trial reported that only 1.5% of MSA patients experienced a less than 50% improvement when taking levodopa, and even this was a transient effect lasting less than one year. Poor response to L-Dopa has been suggested as a possible element in the differential diagnosis of MSA from Parkinson's disease.

A recent study conducted in Europe failed to find an effect for the drug riluzole in treating MSA or PSP.[3]

Management by rehabilitation professionals (physiatrists, physiotherapists, occupational therapists, speech therapists, and others) for problems with walking/movement, daily tasks, and speech problems is essential.

Physiotherapy can help to maintain the patient’s mobility and will help to prevent contractures.[16] Instructing patients in gait training will help to improve their mobility and decrease their risk of falls.[22] A physiotherapist may also prescribe mobility aids such as a cane or a walker in order to increase the patient’s safety.[22] Other ways a physiotherapist can help to improve the patient’s safety is to teach them to move and transfer from sitting to standing slowly to decrease risk of falls and limit the effect of postural hypotension.[22] Instruction in ankle pumping helps to return blood in the legs to the systemic circulation.[22] In order to further control the postural hypotension, raising the head of the bed by 8 inches (20.3 cm) while sleeping may be indicated as well as the use of elastic compression garments.[5]

Social workers can also help with coping with disability and access to health care services, both for the person with MSA as well as his/her family caregivers.

Multiple system atrophy can be explained as cell loss and gliosis or a proliferation of astrocytes in damaged areas of the central nervous system. This damage forms a scar which is then termed a glial scar.[16] Currently, a confirmed diagnosis of MSA can only be made post-mortem as glial cytoplasmic inclusion bodies are visible. When brain tissue of a person with MSA is examined under a microscope, these glial structures are visible, confirming the diagnosis. The presence of these inclusions (also known as Papp-Lantos bodies) in the movement, balance and automatic control centres of the brain are the defining histopathologic hallmark of MSA. Recent studies have shown that major fillamentous component of glial and neuronal cytoplasmic inclusions is alpha-synuclein.[23] Mutations in this substance may play a role in the disease.[24] Tau proteins have been found in some GCIs[25]

Many terms have historically been used to refer to this disorder, based on the predominant systems presented. These include Olivopontocerebellar atrophy (OPCA), Shy-Drager syndrome (SDS), and Striatonigral degeneration (SND).

These terms and their distinctions have been dropped in recent (1996 onwards) medical usage[26] and replaced with MSA subtype naming, but are helpful to understanding the older literature about this disease:

The current terminology and diagnostic criteria for the disease were established at a 2007 conference of experts on the disease and set forth in the "Second consensus statement on the diagnosis of multiple system atrophy."[28]

The Second Consensus Statement defines two categories of MSA, based on the predominant symptoms of the disease at the time of evaluation. These are:

A possible link has been identified with the gene (Src homology 2 domain containing) transforming protein 2 located in the distal 350-kb subtelomeric region of chromosome 19 (19p13.3)[29]

Carlos Cristos, a Spanish physician who died of MSA in 2008, is the subject of an inspiring documentary film about his coping with the disease, Las Alas de la Vida [The Wings of Life] (2007).