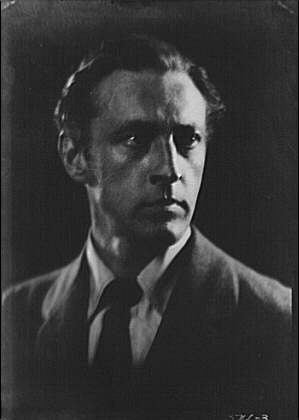 John Sidney Blyth Barrymore ( – ), was an American , frequently called the greatest of his generation. He first gained fame as a stage actor, lauded for his portrayals of and Richard III. His success continued with motion pictures in both the silent and sound eras. His classic nose and distinguished features won him the nickname "The Great Profile".

A member of a multi-generation theatrical dynasty, he was the brother of and , and the grandfather of .

Barrymore was born into an illustrious theatrical family. His parents were and his wife Georgie Drew Barrymore. His maternal grandmother was (aka Mrs Drew), a prominent and well-respected 19th century actress and theater manager, who instilled in John, his sister Ethel and brother Lionel the ways of acting and theatre life. His uncles were and Sidney Drew.

John fondly remembered the summer of 1896 in his youth spent on his father's rambling farm on . He and Lionel lived a -like existence, attended by a black cook named Edward . He was expelled from in 1898 after being caught patronizing a . He was a hard-drinking adventurer with a jaunty personality.

While still a teenager, he courted in 1901 and 1902. When Nesbit became pregnant -- she aged 17 and he 19 -- Barrymore proposed marriage. But her "sponsor" intervened, and arranged for the still teenaged Evelyn to undergo an undercover as an "appendicitis". White was later murdered by Nesbit's vengeful husband, millionaire .

He was staying at the in when the 1906 earthquake struck. He had starred in a production of "The Dictator" and was booked to tour Australia with it. Since he loathed this prospect, he hid, spending the next few days drinking at the home of a friend on Van Ness Avenue. During his drinking jag, he worked out a plan to exploit the earthquake for his own ends. He decided to present himself as an on-the-scene "reporter", making up virtually everything he claimed to have witnessed. Twenty years later, Barrymore finally confessed to his deception, but by then, he was so famous that the world merely smiled indulgently at his admission."

Barrymore was also great friends and a drinking buddy with baseball legend . Donlin eventually appeared in two of John's silent movies, "Raffles The Amateur Cracksman" and "The Sea Beast".

Barrymore delivered some of the most critically acclaimed performances in and cinema history and was regarded by many as the screen's greatest performer during a movie career spanning 25 years as a leading man in more than 60 films.

Barrymore specialized in trivial though congenial comedies until convinced by his friend, playwright , to try serious drama. Thereafter Barrymore created a sensation in 's "" (1916) co-starring . He followed this triumph with Broadway successes in "" (1917), a role his father Maurice had wanted to play, Tolstoy's "Redemption"(1918) and "" (1919), co-starring his brother Lionel, reaching what seemed to be the zenith of his stage career as Richard III in 1920. Barrymore had a conspicuous failure in his wife 's strange play "" (1921), but followed it with the greatest success of his career with "" in 1922, which he played on Broadway for 101 performances and then took to in 1925.

Barrymore entered films around 1913 with the feature "An American Citizen". He or someone using the name "Jack Barrymore" is given credit for four short films made in 1912 and 1913 but this has not been proven to be John Barrymore. Barrymore was most likely convinced into giving films a try out of economic necessity and the fact that he hated touring a play all over the United States. He could make a couple of movies in the off season theater months or shoot a film in one part of the day while doing a play in another part of the same day. He also may have been goaded into films by his brother "Lionel" and his "Uncle Sidney" who had both been successfully making movies for a couple of years. Barrymore's silent-film roles included in "Raffles the Amateur Cracksman" (1917), "Dr. Jekyll and Mr. Hyde" (1920), "Sherlock Holmes" (1922), "" (1924), Captain Ahab in "" (1926), and "Don Juan" (1926). When talking pictures arrived, Barrymore's stage-trained voice added a new dimension to his screen work. He made his talkie debut with a dramatic reading from "" in ' musical revue "The Show of Shows", and reprised his Captain Ahab role in "" (1930). His other leads included "" (1930), "Svengali" (1931), "" (1931), "Grand Hotel" (1932) (in which he displays an affectionate chemistry with his brother Lionel), "Dinner at Eight" (1933), "Topaze" (1933) and "Twentieth Century" (1934). He worked opposite many of the screen's foremost leading ladies, including , , , and . In 1933, Barrymore appeared as a Jewish attorney in the title role of "" based on 's 1931 play. As critic later wrote, he "seems an unlikely choice for the ghetto-born lawyer...but this is one of the few screen roles that reveal his measure as an actor. His 'presence' is apparent in every scene; so are his restraint, his humor, and his zest."

In the late 1930s, and possibly encroached on his ability to remember his lines, and his diminished abilities were apparent in a surviving screen test that he made for an aborted film of "" in 1934. From then on, he insisted on reading his dialog from . He continued to give creditable performances in lesser pictures, for example as Inspector Nielson in some of ' mysteries, and offered one last bravura dramatic turn in 's 1939 feature "". After that, his remaining screen roles were broad caricatures of himself, as in "The Great Profile" (with a demeaning choice of theme music: "Oh, Johnny, How You Can Love") and "World Premiere". In the otherwise undistinguished "Playmates" with band leader , the failing Barrymore recited the "Hamlet" soliloquy with care and conviction. In 1937, Barrymore visited , the land where his father had been born. In his private life, during his last years, he was married to his fourth and last wife, Elaine Barrie, which turned out to be disastrous. His brother Lionel tried to help John find a small place near himself and to convince John to stay away from impetuous marriages which usually ended in divorce and put a strain on his once large income.

He was known for calling people by nicknames of his own creation. was known in his writing alternately as "Small Cat," "Catkiwee," "Winkie", and "Egg." He called Lionel "Mike", and Ethel called John "Jake". He was fond of sailing, and owned his own yacht, "The Mariner", on which he could escape unhappy wives, mistresses, lawyers, and creditors.

Barrymore collapsed while appearing on 's radio show and died some days later in his hospital room. His dying words were "Die? I should say not, dear fellow. No Barrymore would allow such a conventional thing to happen to him." attributes different dying words to Barrymore in his biography "Good Night, Sweet Prince". According to Fowler, John Barrymore roused as if to say something to his brother Lionel; Lionel asked John to repeat himself, and John simply replied, "You heard me, Mike."

According to 's memoirs, film director "borrowed" Barrymore's body after the funeral, and left his corpse propped in a chair for a drunken Flynn to discover when he returned home from The Cock and Bull Bar. This was re-created in the movie "". Other accounts of this classic Hollywood tale substitute actor in the place of Walsh, but Raoul Walsh himself tells the story in Richard Schickel's 1973 documentary "The Men Who Made the Movies".

For his contribution to the motion picture industry, John Barrymore has a star on the at 6667 .

Barrymore had been a friend and contemporary (and drinking buddy) of his fellow Philadelphian . In the 1976 film "W.C. Fields and Me", Barrymore was played by . He was also portrayed by in the 1996 one-man show "Barrymore," and by in the 1958 film "."

He is mentioned in the lyrics of the song "I May Be Wrong (But I Think You're Wonderful)" by Harry Sullivan and Harry Ruskin, written in 1929, which became the theme song of the in New York, and which was recorded by many artists including in 1950. The line is "You might be John Barrymore", meaning that you might be someone wonderful (it is a love song).