Dinner at Eight is a Pre-Code 1933 comedy of manners/drama produced by MGM Studios. The film was adapted to the screen by Frances Marion and Herman J. Mankiewicz from the play by George S. Kaufman and Edna Ferber, with additional dialogue supplied by Donald Ogden Stewart. Produced by David O. Selznick, it was directed by George Cukor.

Although it can technically be called a romantic comedy, Dinner at Eight is a study of people during the Great Depression. The movie addresses topics that include wealthy people dealing with the loss of money and prestige; relationships between men and women involving power, blind love, selfishness, and unselfishness; and relationships between the wealthy and those who work for them.

One week before her next society dinner, Millicent Jordan (Billie Burke) receives word that Lord and Lady Ferncliffe, whom she and her husband Oliver (Lionel Barrymore), a New York shipping magnate, had met in England the previous year, have accepted her invitation. Overjoyed by this social coup, Millicent is oblivious to Oliver's lack of enthusiasm about the dinner and her daughter Paula's (Madge Evans) preoccupation about the impending return of her fiancé, Ernest DeGraff (Phillips Holmes), from Europe. Millicent fusses about finding an "extra man" as escort for her single female guest, former stage star Carlotta Vance (Marie Dressler), who resides in Europe.

Meanwhile Oliver faces distressing news about his shipping business, which has been struck hard by the Depression. He is concerned that someone is secretly trying to buy the company stock. Carlotta, a former lover of Oliver, visits him at his office and confesses that she is nearly broke and very eager to sell her stock in the Jordan Shipping Line. She asks Oliver to buy it from her but he is not financially able to do so. 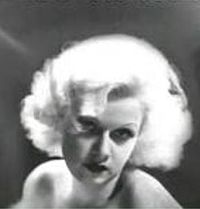 Harlow in Dinner at Eight trailer

While conversing with Carlotta, Oliver is visited by Dan Packard (Wallace Beery), a rough-talking, nouveau-riche mining magnate. Oliver confides his financial struggles to Dan and asks him to take over some of his stocks until business improves. With blustering hesitation, Dan agrees only to consider Oliver's proposition, then goes home to brag to his brassy, gold digger wife Kitty (Jean Harlow) that the Jordan Line is a valuable asset and he intends to devour it through crooked stock purchases.

Unknown to Dan, Oliver has convinced Millicent to invite the Packards to her dinner in the hope that it will end Dan's hesitation to buy the stock. The ill-mannered but socially ambitious Kitty has eagerly accepted the invitation but Dan refuses to go, believing he is soon to be appointed to a cabinet position in Washington and, therefore, far above the Jordans. He changes his mind at the mention of the Ferncliffes, the richest couple in England. Another of Millicent's guests, Dr. Wayne Talbot (Edmund Lowe), has been carrying on a clandestine affair with Kitty while making a pretense of tending to her feigned illnesses.

On the eve of her dinner, Millicent, still short an extra man, telephones Larry Renault (John Barrymore), a washed-up silent movie star, and extends a last-minute invitation, utterly unaware that Paula is having a covert love affair with him. At Paula's urging, Larry, a three-time divorcé and hardened alcoholic, accepts the invitation, but advises the much younger Paula to forget him and return to Ernest. After Paula stubbornly refuses to take Larry's admonitions seriously, she is seen leaving his room by Carlotta, who is staying at the same hotel.

Larry is visited by his agent, Max Kane (Lee Tracy), who tells him that the stage play he was planning to star in has lost its original producer. Max breaks the news to Larry that the play's new producer, Jo Stengel (Jean Hersholt), wants another actor in the lead but is willing to consider Larry for a bit part. Although crushed, Larry agrees to think over the offer, then desperately sends a bellboy to pawn a few of his possessions for a bottle of alcohol.

The next day, Dr. Talbot is discovered by his wife Lucy (Karen Morley) in a compromising telephone call with Kitty and confesses that, in spite of his love for her, he is addicted to women and needs help to overcome his weakness. Talbot then rushes to see Oliver, who has come to the Doctor's office with severe chest pains.

Although Talbot tries to hide his prognosis of terminal thrombosis of the heart, Oliver deduces the seriousness of his illness. When he returns home, the weakened Oliver tries to explain to Millicent his need for rest, but she is too hysterical to hear because, among other minor disasters, the Ferncliffes have cancelled and are on their way to Florida. Although anxious to tell Millicent about Larry, Paula, too, is turned away by her upset mother and faces the prospect of confronting Ernest alone.

At the Packards, meanwhile, Kitty reveals to Dan in a fit of anger that she is having an affair. When threatened with divorce, however, Kitty tells her husband that, if he wants his Cabinet appointment instead of a career-stopping revelation from her about his crooked dealings, he must back down from his takeover of Oliver's line and treat her with more respect.

Just before he leaves for the dinner, Larry is visited by Max and Jo Stengel and drunkenly berates Stengel for insulting him with his paltry offer. After a frustrated Max denounces him for ruining his last career chance and the hotel management asks him to leave, Larry quietly turns on his gas fireplace and commits suicide.

At the ill-fated dinner, Carlotta confides Larry's demise in private to Paula, who is just about to break her engagement with Ernest. She counsels the young woman to remain with her fiancé. At the same time, Millicent learns from Talbot about Oliver's illness. Finally awakened to her selfishness, Millicent announces to Oliver that she is ready to make sacrifices for the family and become a more attentive wife. Then, as the beleaguered guests are about to go in to dinner, Dan, with prodding from Kitty, tells Oliver that he has put a stop to the takeover of the Jordan shipping line.