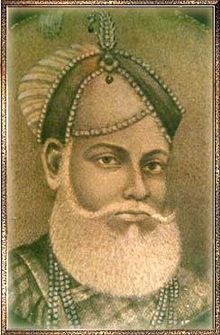 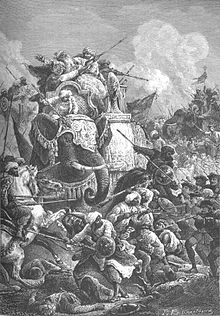 Death of the Nabob of the Carnatic in a battle against the French in 1749, by Paul Philipoteaux.

Muhammad Anwaruddin (1672–1749) was the 1st Nawab of Arcot of the second Dynasty. He was a major figure during the Second Carnatic War.

He was a direct descendant of Hazarath Omar, the Second Caliph of Islam[citation needed]. Nawab Anwaruddin Khan was born at Gopamau, a place in Hardoi District, United Provinces, India in 1674. He was the son of Haji Muhammad Anwar. His official name was Amin us-Sultanat, Siraj ud-Daula, Nawab Haji Muhammad Jan-i-Jahan Anwar ud-din Khan Bahadur, Shahamat Jang, Subadar of the Carnatic.

He went to Delhi and enlisted in the imperial army and soon rose to a high position. The Emperor Aurangzeb was very pleased with him on account of his faithful work[citation needed]. He served as Governor of Surat[citation needed]. Also he was posted to Rajahmundry, where he served for several years as Governor[citation needed]. He was the Yameen-us-Sultanat (right hand man) of Nizam-ul-Mulk, the founder of Hyderabad State in India. He was also the ruler of Rajamundry.

Muhammad Anwaruddin was first appointed as the Regent during the minority of Muhammad Sa'id. After the death of Muhammad Sa'id, Anwaruddin was appointed by the Nizam as his representative and Nawab of the Carnatic on 28 March 1744. Thus he became the founder of the Second Dynasty of the Nawab of the Carnatic. Anwaruddin maintaining a cordial relationship with the East India Company would come into conflict with the French after the death of Nizam-ul-Mulk in 1748.

Muhammad Anwaruddin fought against the French on the banks of the Adyar and won a decisive victory[citation needed], recaptured the two towns and restored them to the English[citation needed]. Thus, he maintained the honour of his administration and established the power of his "Nizamath" or government[citation needed].

As the British and the French supported their respective candidates for the Nawabship, they took sides in the case of the successors of the Nizam also. After the death of the Nizam in 1748, there arose a rivalry between Nasir Jung, the second son of Nizam-ul-Mulk and Muzaffar Jang, the grandson of Nizam-ul-Mulk. Muzaffar Jang came to the South with a strong force and allied himself with Chanda Sahib and the French. The ageing Nawab Muhammad Anwaruddin, supported by the English, met the French army at Ambur in August 1749 and was killed in the battle. He was mentioned as the oldest soldier to die on battlefield till date in Ripley's believe it or not" (at age of 77).Ripley has mentioned cause of his death as gunshot wounds but that has not been independently verified.