Chez Panisse is a Berkeley, California restaurant known for using local, organic foods and credited as the inspiration for the style of cooking known as California cuisine. Well-known restauranteur, author, and food activist Alice Waters co-founded Chez Panisse in 1971 with film producer Paul Aratow, then professor of Comparative Literature at the University of California, Berkeley. From the beginning, Waters advocated a style of cooking that uses the freshest, most delicious local food available, often prepared and presented simply and/or traditionally. The restaurant prides itself on relationships with producers, and buys through its established network of local farmers, ranchers, and dairies.

Chez Panisse has been listed by Restaurant magazine as one of the top 100 restaurants in the world for the last several years[citation needed]. From 2002 to 2008 it was one of the top fifty restaurants in the world, and was ranked number 12 in 2003. [1] In 2007, Alice Waters won Restaurant Magazine's Lifetime Achievement Award, and was cited as one of the most influential figures in American cooking over the past 50 years.[2] Michelin awarded the restaurant a one-star rating in its guide to San Francisco Bay Area dining from 2006 through 2009.[3][4] In 2001, Gourmet magazine named Chez Panisse the Best Restaurant in America.[5]

In 1971, Alice Waters founded Chez Panisse in an Arts and Crafts house along Shattuck Avenue, in Berkeley, California. The restaurant was designed to foster an intimate, comfortable atmosphere. Chez Panisse is named after Honore Panisse, a character in a trilogy of Marcel Pagnol films about working class life in Marseille, France called Marius, Fanny and César .[6]

From the beginning, the restaurant has sourced the highest-quality food available. Today, this entails sourcing food that is locally, organically, and sustainably grown. The menu is dictated by what is fresh and in season, and the restaurant has a network of farmers, ranchers, and dairies that produce and supply the food that is then cooked and served at Chez Panisse. The Chez Panisse website contains the following statement about the philosophy of Waters and her restaurant:

The restaurant has always served a set menu that changes daily and reflects the season's bounty. Monday nights at the restaurant generally feature more rustic or regional dishes, such as a lamb tagine or fisherman's stew, in addition to a first course and dessert. Tuesday through Thursday, the restaurant serves a 4-course set dinner menu, including dessert. On Friday and Saturday evenings, a more elaborate 4-course meal is served. The restaurant is closed on Sundays.

In 1980, Waters opened the Chez Panisse Café, which offers an alternative to the set menu of the downstairs restaurant. The upstairs café features the same local, organic ingredients as the restaurant, but the menu is a la carte and more modestly priced than the set menu of the restaurant. The menu still changes daily, while offering several selections of appetizers, main courses, and desserts. While the restaurant serves only dinner, the café is open for both lunch and dinner, Monday through Saturday. The upstairs café has its own kitchen which includes a charcoal grill and wood-burning pizza oven, although much of the prep work for the cafe is done in the main downstairs kitchen.

The restaurant and café have their own staff and are run separately. The restaurant has two head chefs, David Tanis and Jean-Pierre Moulle. Each runs the kitchen for six months out of the year. The cafe has two co-chefs, Cal Peternell and Beth Wells. In addition to these chefs, there are many other cooks and interns working in the kitchen. The pastry kitchen is run by pastry chefs Carrie Lewis and Stacie Pierce.

Alice Waters has served as the executive chef at Chez Panisse since 1971, although her role has changed over the years. Now, she is no longer in the kitchen on a day-to-day basis. Instead, she does tastings, provides input on menus, and is in charge of the operations of the restaurant and of the Chez Panisse Foundation, a non-profit organization that funds the Edible Schoolyard, in Berkeley, and that Waters founded in 1996.[6] 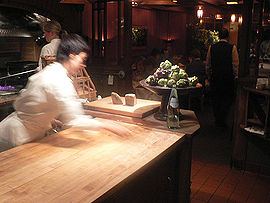 Originally, Chez Panisse was designed to cultivate the atmosphere of an intimate dinner party, with hosts who paid attention to even the smallest details of the dining experience and guests who enjoyed the same meal around the table. As an active participant in the Free Speech Movement that swept UC Berkeley's campus in the 1960s, Waters learned to love cooking for others while she hosted gatherings to discuss politics with her peers.[6]

The culinary influences for Chez Panisse were largely French, inspired by the classic French cookbook La Bonne Cuisine de Madame E. Saint-Ange. This book has been translated into English by Paul Aratow, who was also the first chef de cuisine at Chez Panisse. Although Waters never preferred the fancy and predictable restaurants of Paris, she became enamored with the small, country restaurants of France that cooked whatever was fresh that day and created menus based on what the market had to offer. She first traveled to France as an undergraduate at UC Berkeley, where she majored in French Cultural Studies, and immediately was drawn to the food and market culture around her. In particular, Waters found inspiration from Lulu and Lucien Peyraud, owners of the Domaine Tempier vineyard in Bandol, in the south of France. Their enjoyment of food and wine and their simple preparations of the fresh, local produce had strong influence on the food and atmosphere of Chez Panisse.[6] Aratow had lived for years in Italy and France, exploring the language, cuisine and culture of both countries, and had a finely developed talent for hands-on culinary craftsmanship. He also designed and supervised the transition of an ordinary two story apartment house into the restaurant structure, working with the carpenters on a nearly non-existent budget.

In addition to Waters' travels in France, the writings of Richard Olney, an American cook who spent most of his life in France, and of Elizabeth David, a British cook and food writer, served as inspirations for the restaurant’s menu.

In 1971 Waters and Aratow opened the restaurant to a twice sold out house. Victoria Wise served as the first cook, and Lindsey Shere, a friend of Alice's, was the pastry chef.

Due to Waters' insistence on using the highest-quality ingredients she could find regardless of cost, coupled with her lack of experience working in—not to mention running—a restaurant, Chez Panisse struggled financially for many years after it opened. The restaurant also gained a reputation for its staff's partying and illegal drug use, which contributed to the environment of the young Chez Panisse. Nonetheless, Waters and Aratow continued on, cooking country French-inspired meals with local California ingredients. In the process, Waters and the restaurant began building up their network of local producers, which continues to provide the restaurant with the majority of its ingredients today.[6]

In 1972, Jeremiah Tower became the chef de cuisine of Chez Panisse, replacing Victoria Wise. While at Chez Panisse he was in charge of the kitchen and the menus. He left in 1978 and went on to open Stars, in the 1980s. He, along with Alice Waters, Paul Aratow and several other chefs, are often credited with creating the style of cooking known as “California Cuisine.” Paul Bertolli served as the head chef of Chez Panisse from 1982-1992. With Waters, Bertolli co-wrote the cookbook Chez Panisse Cooking. He later went on to become the head chef of Oliveto, an Italian restaurant in Oakland, California, and now owns the salumi company Fra’mani.

Jean-Pierre Moulle joined the Chez Panisse kitchen in 1975, as Jeremiah Towers' sous chef, and eventually worked his way to head chef. He continues to serve as head chef of the restaurant for 6 months out of the year. David Tanis, who started at Chez Panisse in the 1980s, holds the post for the other half of the year.

Biographer Thomas McNamee has characterized the restaurant's history as bipolar, with triumphs alternating with disasters leading to more successes. This cycle could be seen in the aftermath of a March 1982 fire that came within 10 minutes of destroying the building. Influenced by the book A Pattern Language, Waters collaborated with co-author Christopher Alexander on a redesign (principally by the great cabinetmaker, designer and builder Kip Mesirow) that removed the partially burned wall previously separating the kitchen from the dining room.[6] Today, the former is clearly viewable from the latter, and diners interested in the kitchen and its cooking are often invited in. Famous diners include the Dalai Lama and President Bill Clinton. With the help of Alice Waters, filmmaker Werner Herzog cooked his shoe at Chez Panisse, eating it at the nearby UC Theater before the premier of the film Gates of Heaven, an event recorded in the documentary Werner Herzog Eats His Shoe.

Beyond its broad influence on American cuisine, Chez Panisse has contributed to the success of many prominent chefs and the founding of a number of notable food-related businesses.

Other alumni who went on to become chef-owners of renowned restaurants include Charlie Hallowell, chef-owner of local pizza restaurant Pizzaiolo, Michael Tusk of Quince, Mary Jo Thoresen of Jojo, Gayle Pirie of Foreign Cinema, Christopher Lee of Eccolo, Joyce Goldstein of Square One, Amaryll Schwertner of Boulettes Larder, Alison Barakat of Bakesale Betty's,[19] and Russell Moore and Allison Hopelain of Camino in Oakland,[20] all in the San Francisco Bay Area, and Mark Peel of Campanile Restaurant in Los Angeles, California.[11] In addition, April Bloomfield, the head chef of The Spotted Pig in New York City, cooked for a time at Chez Panisse.