/ˈsɪzlæk/) is a fictional character in the American animated television series, The Simpsons. He is voiced by Hank Azaria and first appeared in the series premiere episode "Simpsons Roasting on an Open Fire".[1] Moe is the proprietor and bartender of Moe's Tavern, a Springfield bar frequented by Homer Simpson, Barney Gumble, Carl Carlson, Lenny Leonard, Sam, Larry, and others.

Role in The Simpsons

Moe is the owner and operator of Moe's Tavern. His most loyal customer is Barney Gumble. Other regulars include Homer Simpson, Lenny Leonard, Carl Carlson, Sam and Larry. Moe usually serves Duff beer on tap. He enthusiastically abandons his bar, its regular customers, and his friends when a better opportunity comes along, such as the drink "The Flaming Moe", the opening of his postmodern bar "m", the conversion of his bar into a family-themed restaurant called Uncle Moe's Family Feedbag and a British themed pub with Marge called the Nag and Weasel. Along with Moe's Tavern, he also has a bar called Moe's Express located in Springfield Mall. Moe is often engaged in shady or illegal activities at his tavern, including smuggling pandas and orcas, imprisoning Hans Moleman under the floor of the bar, hosting Russian roulette games, operating an unlicensed casino, serving liquor without a license (the liquor license he had was from 1973, signed by Moe himself, and only valid in Rhode Island), running a speakeasy during Springfield's brief flirtation with prohibition, performing unlicensed surgery, and housing Africanized bees. He is best known for being the most frequent recipient of Bart Simpson's prank calls. These involve them asking to speak to some fictional person with a provocative name (e.g. Mike Rotch, aka "My crotch"), which, when Moe says it, makes it dirty/naughty and/or insulting to himself, making everyone in the bar laugh at him. This always leads to Moe threatening to find and harm the caller in a violent and unusual way. Despite this, in one episode, Bart goes to the tavern and Moe doesn't recognize his voice. Also, at one point, a person in the bar is shown to have that episode's provocative name (Hugh Jass, or "Huge ass"), and when he takes the phone, Bart quickly explains about it being a prank call and they hang up with Hugh Jass saying "what a nice young man".

Moe's temperament is characterized by a short, violent temper, coupled with homicidal and suicidal tendencies (the latter of which has become more apparent in later episodes of the show). He frequently threatens various people with a shotgun and attempts suicide (including an annual attempt at Christmas and in the episodes "Mommie Beerest" after his bar is closed by the health department, Moe calls the suicide hotline only to discover that they’ve blocked his number and "Treehouse of Horror XIV" in demonstration of the absence of Death). He assumes a leading role in many of Springfield's angry mobs (such as a soccer riot in the episode "The Cartridge Family"), and kidnapping Talking Heads vocalist David Byrne. He has also shot at Carl Carlson, robbed Homer of expensive pants, kept Hans Moleman under his bar's floorboards in a subterranean chamber, perpetrated insurance fraud ("Dumbbell Indemnity"), shot Sam in the back for trying to pay in Sacagawea dollars, and stalked various townspeople. His sociopathic tendencies are made the subject of humour in "Burns' Heir", where he can be seen in his own home preparing a dialogue for some kind of confrontation in front of a mirror, and using a home-made sliding action pistol holster (which comically smashes the mirror) in a parody of Robert De Niro's Travis Bickle character from Taxi Driver. This behavior is further exhibited in The Simpsons Movie when he becomes the self-proclaimed "Emperor of Springfield" when the town is ruined. His leadership is challenged by Barney Gumble, who throws a Molotov Cocktail at him, which Moe successfully throws back. This temperament, however, can be an advantage when necessary.

Moe has an almost nonexistent love life due to his vulgarity towards women and his ugly appearance. Despite this, Moe has had a number of romantic experiences, including sleeping with his bartender Collette,[2] dating a woman named Renee, [3] and briefly enjoying the company of many women after he had plastic surgery.[4] He also has a relationship and proposed to a little person named Maya, but Maya broke up with him after Moe kept cracking jokes about her height. He has long been infatuated with Marge Simpson, whom he calls 'Midge', and has on occasion tried to win her away from Homer.[5][6] He has been romantically involved with Edna Krabappel[7] as well as Marge's sister Selma. Moe's romantic attractions have resulted in run-ins with the law; he has stalked Maude Flanders and other townspeople, he must register as a sex offender, and he has a restraining order placed upon him. At one point he is seen on his way to a "V.D. clinic".[8] Despite his creepy approach, Moe has showed to be a caring and devoted lover. While dating Renee (and previously Edna), he wholeheartedly spoiled them with whatever they wanted and vowed to give up his bar and take them away from Springfield forever, even if it means losing his own money and doing illegal acts to make more money. When he thought he finally won Marge's heart, he promised to be a better lover than Homer.[citation needed]

Despite his faults, Moe has been shown to express genuine love and sentimentality, which suggests that he may not be as gruff or sociopathic as he appears. He has a cat named Mr. Snookums, of whom he is very fond but will turn hostile if anyone sees him with the cat. Moe is also kind towards the rats that live in his bar. On Wednesday nights, he reads to the homeless in a local soup kitchen and seems to have a soft spot for kids. He thoroughly enjoys Bart's company (not knowing it's Bart who has made numerous prank phone calls to his bar). He rudely tells his customers to shut up when Lisa has something she wants to say. After saving Maggie's life he develops a close and very protective relationship with her, going so far as to insult an attractive woman who is flirting with him when he mistakenly thinks she is calling Maggie ugly.

Moe's past is somewhat mysterious as he variously claimed to be Polish, Italian, Arab, and Dutch[9] as well as being born in Indiana.[10] The many conflicting stories of Moe's heritage on the show are parodied in The Book of Moe, where Moe is seen in several different foreign outfits and commenting on them (often with puns). In Season 4 Episode 3 "Homer the Heretic", Moe's religious views are revealed in his statement, "I was born a snake handler and I'll die a snake handler." Although he was called Morris by his then employee and lover in the episode "Flaming Moe's", it is likely that he was lying and his real name is actually Moammar, as revealed in the episode "The Springfield Connection". 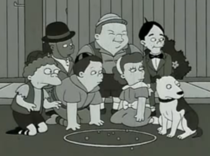 Moe (left) as "Smelly" in The Little Rascals.

As a child, he played the part of "Smelly", a tough kid, on The Little Rascals until he killed the original Alfalfa for stealing his bit (looking into a car's exhaust pipe just in time to get a face full of exhaust), but was never punished for it because Alfalfa was an orphan owned by the studio. At some unspecified time during his childhood (though it is quite likely this happened before he got his role on "The Little Rascals", since that would explain how he came into the studio's possession), his parents dropped him off at summer camp, never to return. In a flashback, he is revealed to have spoken with an Italian accent as a child, but this is contradicted by other accounts of his childhood. In that same episode, it shows the beginning of Moe becoming a victim of prank calls when young Marge calls the boys' camp and asks to talk to Elvis Jagger Abdul-Jabbar, which is what Homer introduced himself as to her. Moe, thinking that she is trying to trick him, becomes angry and hangs up. Then he turns to the camera and says, "And, uh, that's the origin of that."[11] During the time Homer and Marge were in high school, Moe worked in the school cafeteria, as his first job out of prison. Then school journalists, Marge and her friend, Chloe Talbot, caught the young Moe spitting in the cafeteria soup he was preparing. Exposing this, Moe was taken back to jail, yelling "You ain't tasted the last of my spit!", indicating he might spit into some drinks he serve at his bar. In "Eternal Moonshine Of The Simpson Mind", knowing that Homer will not remember anything he says, Moe tells him "I've spit in every drink I ever served you!" before spitting in his drink. Moe was thought to be allergic to pollen; years later, when he found out he wasn't, he made up for lost time by jumping rope. As a young man, Moe became a semi-professional boxer, his ring name constantly changing to suit his deteriorating physical appearance. He started as "Kid Gorgeous" and slowly morphed into "Kid Presentable", "Kid Gruesome", and finally "Kid Moe". Moe blames his boxing career for making him ugly. According to Moe, his boxing career ended because of politics, and because he was knocked out 40 times in a row. Moe's ugliness caused him to audition unsuccessfully for a part in It Never Ends, a soap opera, revealed in "Pygmoelian". His current appearance has been described as consisting of "cauliflower ear, lizard lips, little rat eyes, caveman brow and fish snout" in the same episode. Moe's ugliness has since become a recurring source of humor on the show. For example, in "Eternal Moonshine of the Simpson Mind", Moe pauses a video of himself and every frame that is shown reveals a hideous expression on his face (even though he appears normal when the video is playing).

The creator of The Simpsons Matt Groening based Moe on Louis "Red" Deutsch who was made famous when he was repeatedly prank called by two Jersey City residents. These prank calls were the inspiration for Bart Simpson's repeated prank calls to Moe, and Deutsch's often profane responses inspired Moe's violent temper.[13] Further inspiration was drawn from comedian Rich Hall, an acquaintance of The Simpsons writer George Meyer. Hall considers being the basis for Moe "an honor."[14] Moe's surname "Szyslak" was revealed in "Who Shot Mr. Burns? (Part One)". Writers Bill Oakley and Josh Weinstein found the name in a phonebook and gave it to Moe so that he would have the initials M.S., and hence be a suspect in the Burns shooting.[15] Moe was designed by animator Dan Haskett and his facial appearance was modeled after a gorilla.[16][17] Animator Mark Kirkland said that he usually lets pass through production off-model drawings of Moe because the character is so ugly that no one will notice.[18]

Moe was the first voice Hank Azaria performed for the show. During the time of his audition, Azaria was doing a play in which he had the part of a drug dealer, basing his voice on actor Al Pacino in Dog Day Afternoon. He used the same voice in the audition, and was told by Matt Groening and Sam Simon, who were directing him, to make it more gravelly like Deutsch's voice. Groening and Simon thought that it was perfect and took Azaria over to the Fox network recording studio. Before he had even seen a script, Azaria recorded several lines of dialogue as Moe for the episode "Some Enchanted Evening".[19][20] Moe was originally voiced by actor Christopher Collins. Collins recorded several lines as Moe which never aired.[20]

In 2001 and 2003, Hank Azaria won Primetime Emmy Awards for Outstanding Voice-Over Performance for voicing Moe and various other characters.[21]