"HOMR" (styled as "HOMЯ") is the ninth episode of The Simpsons’ twelfth season, originally aired on January 7, 2001 by the Fox Broadcasting Company. The episode is the 257th episode overall and the last episode produced for the eleventh season (the BABF production line). In the episode, while working as a human guinea pig (to pay off the family's lost savings after making a bad investment), Homer discovers the root cause of his subnormal intelligence: a crayon that was lodged in his brain ever since he was a child. He decides to have it removed to increase his IQ, but discovers that being smart does not necessarily equal being happy.

The episode was written by current show runner Al Jean and directed by supervising director Mike B. Anderson. The episode received positive reviews from critics, won an Emmy Award for Outstanding Animated Program and was nominated for an Annie Award. This is also the last episode in the BABF (season 11) production line.

When the family visits the Sick, Twisted, F***ed-Up Animation Festival, Homer discovers Animotion, a motion capture technology that enables a cartoon character to mimic a human's movements. After volunteering to demonstrate this technology, Homer decides that he likes it so much that he invests his life savings in the Animotion stock, despite being warned several times about the risks of stock ownership. Two days later, he finds out that Animotion's stock has plunged and the company has gone out of business. At Moe's Tavern, he tells Barney and Moe about his troubles, and Barney suggests that Homer be a human guinea pig.

Homer decides to follow up on Barney's advice, and gets a job at a medical testing center. During one experiment, while commenting on Homer's stupidity, the doctors find a crayon lodged in Homer's brain from a childhood incident when he stuck sixteen crayons up his nose and was unable to sneeze one of them out. The scientists opt to have the crayon removed and Homer accepts their offer, mistakenly believing that the surgery will "increase his killing power".

Homer survives the operation, and his IQ goes up from 55 to 105, allowing him to form a bond with his daughter Lisa. Homer's newfound brain power soon brings him enemies, however, after Homer does a thorough report on the Springfield Nuclear Power Plant's many hazards, leading to a massive number of layoffs after the plant is shut down until it can be brought up to code.

Homer then goes to Moe's Tavern, only to see an effigy of himself burning and that he and his improved intelligence are no longer welcome. Wandering around, Homer realizes that despite his new ability to understand the world, his life was a lot more enjoyable when he was a moron, and begs the test center scientists to put the crayon back into his brain. The scientists refuse to do it, but recommend Homer to someone who can: Moe Szyslak.

At his bar, Moe inserts a crayon (which turns out to be Lisa's) into Homer's brain, returning him to the idiot he was before. Lisa, who had required the particular color for a picture she was drawing of Homer, is initially saddened that she and her father would lose the connection they shared, but cheers up when she finds a note written by Homer before the operation, explaining that "while [he's] taking the coward's way out," he now understands what it is like to be smart like Lisa, and how much more he appreciates her because of this. 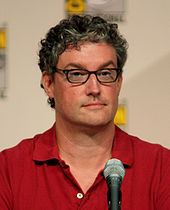 The episode was written by current show runner Al Jean and directed by supervising director Mike B. Anderson. Jean based the episode's plot on Flowers for Algernon, a novel which he had read in the 8th grade.[1] While Mike B. Anderson directed the main part of the episode, Paul Weed directed the anime part of the show and the Davey and Goliath (called "Gravey and Jobriath" in the episode) segment was animated by The Keyono Brothers using stop motion animation.[2] The part where Homer is tested on products is based on experiences from the writers when they were in college they would take product tests for money.[1]

The story is based on Flowers for Algernon, a novel (and later a film titled Charly) which Al Jean read in the 8th grade.[1] The animation festival seen in the first act is a parody on Spike and Mike's Festival of Animation.[1]The Flintstones is referenced twice in the episode; the cigarette commercial with Itchy and Scratchy is a parody on cigarette advertisements made by Winston that featured The Flintstones, and Ozmodiar is a parody on The Great Gazoo, a character from The Flintstones.[1] The scene where Homer walks with neon lights of places for unintelligent people (one being a Disney store) is a reference to The Lost Weekend.[3] While mailing the safety report, Homer can be heard humming the Allegro Moderato from the Brandenburg Concerto No. 3, by Johann Sebastian Bach.[4] Phillip J. Fry from Futurama is seen in the couch gag.[4]

The episode received positive reviews from critics. Nancy Basile of About.com wrote that "I really enjoyed this episode. The storyline was solid and didn't go off track. I was surprised to find Homer even funnier as a genius. The excessive use of pop cultural references was terrific, too, such as Japanimation, smoking, pipe bombs and planned parenthood, ebay and more that I can't remember. Also, I thought the jokes were clever, just like the old days. The only thing I had trouble swallowing was that Moe is suddenly an unlicensed physician. That was the perfect opportunity for ol' Dr. Nick to pop into the show and they wasted it."[5] Colin Jacobson of the DVD Movie Guide said "I won’t call “HomR” an unoriginal episode, but brainy Homer sure does remind me a lot of loquacious Homer from Season Three’s "Bart's Friend Falls in Love". The show has a moderately rehashed feel, so don’t expect a lot of thrills from it. I do like the reveal that a 105 IQ makes one a genius in Springfield."[6] Mac McEntrie of DVD Verdict said the best moment of the episode was The Bill Paxton/Bill Pullman debate.[7] The episode ranked eighteenth on AOL's Top 20 Best Simpsons Episodes.[8] The episode won the series a Primetime Emmy Award for Outstanding Animated Program (for Programming Less Than One Hour), making it the eleventh win for the series.[9] The episode was also nominated for Outstanding Writing in an Animated Television Production at the Annie Awards, but lost to Matt Groening's other show Futurama, The Luck of the Fryrish.[10]