The Red-knobbed Coot or Crested Coot, (Fulica cristata), is a member of the rail and crake bird family, the Rallidae.

It is a resident breeder across much of Africa and in southernmost Spain on freshwater lakes and ponds. It builds a nest of dead reeds near the water's edge or more commonly afloat, laying about 8 eggs (or more in good conditions).[2] However, its behaviour towards its own young is so aggressive that only a few are likely to survive to adulthood. 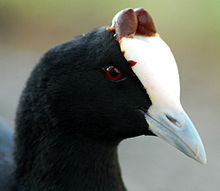 Upper body of a bird in breeding condition in South Africa

A good view is necessary to separate this species from the Eurasian Coot, with which its range overlaps. There are two tiny red knobs at the top of the facial shield, which are not visible at any great distance and are only present in the breeding season; the black feathering between the shield and the bill is rounded, whereas in Eurasian it comes to a point; and the bill has a bluish grey tinge.

The habits of the Red-knobbed Coot are practically identical to those of the Eurasian coot. It is much less secretive than most of the rail family. Reports that it may be more shy than the Eurasian Coot probably reflect observations on birds in more disturbed conditions. Where it is undisturbed it is likely to bully any intruder, even large birds such as Egyptian geese, if they do not defy its challenges.[2] It can be seen swimming on open water or walking across waterside grasslands. It is an aggressive species, and strongly territorial during the breeding season.

The Red-knobbed Coot is reluctant to fly and when taking off runs across the water surface with much splashing. It does the same, but without actually flying, when travelling a short distance at speed (to escape a rival, for example, or to dispute possession of a choice morsel). As with many rails, its weak flight does not inspire confidence. It bobs its head as it swims, and makes short dives from a little jump.

The Red-knobbed Coot is an omnivore, and will take a variety of small live prey including the eggs of other water birds. Its main food in most waters however comprises various waterweeds such as species of Potamogeton for which it commonly dives.[5]

This is a noisy bird during mating, but its vocalisations are quite different from the Eurasian Coot. It gives a fast kerrre like the Little Crake, a harsh ka-haa and a grunting hoot "oot oot" that suggests that the name "coot" might be onomatopoeia, but inspection of the etymology of "coot" fairly decisively negates any such suggestion.[6]