Hortense was born in Paris, France on 10 April 1783, the daughter of Alexandre, Vicomte de Beauharnais and Joséphine Tascher de la Pagerie. Her parents separated shortly after her birth. Her father was executed on 23 July 1794, at the time of the French Revolution, a few days before the end of the Reign of Terror. Her mother was imprisoned in the Carmes prison, from which she was released on 6 August 1794, thanks to the intervention of her best friend Thérèse Tallien. Two years later, her mother married Napoleon Bonaparte.

Hortense was described as having been an amusing and pretty child with long, pale golden-blonde hair and blue eyes.[1] She received her education at the school of Madame Jeanne Campan in St-Germain-en-Laye together with Napoleon's youngest sister Caroline Bonaparte, who later married Joachim Murat.[1] She had an elder brother, Eugène de Beauharnais. Hortense was an accomplished amateur musical composer and supplied the army of her stepfather with rousing marches.[2] She also enjoyed playing games and particularly excelled at billiards.[3]

In 1802, at Napoleon's request, Hortense married his brother Louis Bonaparte. The couple had three sons:

In 1806, Napoleon appointed his brother Louis to be the King of Holland, and Hortense accompanied her husband to The Hague. Hortense's negativity towards being appointed Queen of Holland was twofold: First, it was necessary for her to move there with Louis, with whom she did not get along, and second, she had to leave her life as a celebrated member of Parisian society. She had hoped to be "a Queen of Holland in Paris", but Napoleon did not agree. She was therefore forced to depart with Louis to the Netherlands, where she arrived on 18 June 1806.

Queen Hortense was pleasantly surprised [4] by the warm welcome from the public. She quickly became accustomed to life in the Netherlands and came to like the country. She was present at official celebrations and ceremonies, visited the market places where she made large purchases, and was much liked by the public, which annoyed her husband. She learned water colour painting and made trips around the countryside. Nevertheless, she hated her stay there because of her bad relationship with Louis: The couple lived in different parts of the palace and avoided each other at every opportunity, with Hortense describing herself as a prisoner.[4] In 1807, her son died; she was subsequently allowed to visit France as the climate there was considered better for her other son Louis-Napoléon. She remained in France, again pleased by her status as queen at the French court, until 1810, when Napoleon forced her to return to the Netherlands at his new wedding—he did not consider it suitable to have the daughter of his former spouse at court. Hortense returned temporarily to the Netherlands, but on 1 June 1810, she was allowed to leave again on the pretext of her health.

In 1810, after his Dutch kingdom was taken away from him, Louis remained in Holland for nearly three years, turning to writing and poetry. Louis wrote to Napoleon after the latter's defeat in Russia to request that the Dutch throne be restored to him. However, Napoleon refused. Louis finally returned to France in 1813, where he remained for the rest of his life. 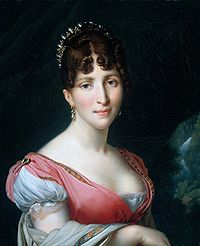 Hortense was now free to respond to the romantic overtures of the man whom she had long admired, Colonel Charles Joseph, Comte de Flahaut, a sophisticated, handsome man rumoured to be the illegitimate son of Talleyrand.[5] They soon became lovers. In 1811, at an unspecified inn in Switzerland, close to Lake Geneva, Hortense secretly gave birth to a son by de Flahaut,

Only her brother Eugène, Adélaïde Filleul de Souza, de Flahaut's mother, and her closest companions were aware of her pregnancy and the subsequent birth. She had used poor health to explain her prolonged visit to Switzerland, the journey having been arranged by Adélaïde. Hortense cleverly disguised her pregnancy (she was by then, in her sixth month), during the baptism of Napoleon's son, Napoleon II when she was chosen to be one of the child's godmothers, an honour she shared with Madame Mère, mother of the Emperor. 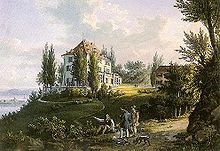 At the Bourbon Restoration in 1814, Hortense received the protection of Alexander I, Tsar of Russia; at his instigation she was created duchess of Saint-Leu by King Louis XVIII. During the Hundred Days, however, Hortense supported her stepfather and brother-in-law Napoleon. This led to her banishment from France after his final defeat. She traveled in Germany and Italy before purchasing the Château of Arenenberg in the Swiss canton of Thurgau in 1817. She lived there until her death on 5 October 1837, at the age of fifty-four. She is buried next to her mother Joséphine in the Saint-Pierre-Saint-Paul church in Rueil-Malmaison.

A portrait of Hortense hangs at Ash Lawn-Highland, the Virginia plantation home of James Monroe, 5th President of the United States. It was one of three portraits given by Hortense to Monroe's daughter Eliza, who went to school with Hortense in France. (The other two portraits are of Hortense's brother Eugène de Beauharnais and of Madame Campan, the headmistress of the school attended by Hortense and Eliza). Eliza's daughter, Hortensia Monroe Hay was named in honour of Hortense.