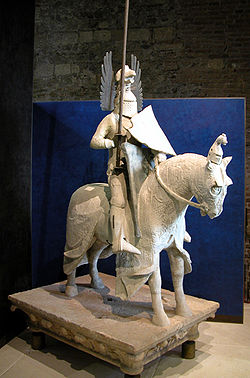 Statue of Mastino II della Scala. Once located on the top of his tomb in the Scaliger Archs, it is now in the Castelvecchio Museum at Verona.

He was the son of Alboino I della Scala and Beatrice da Correggio. At the death of Cangrande I, he and his brother Alberto II were associated in the rule of Verona. Soon, however, Mastino's independent attitude overshadowed the brother's presence. In the first part of his reign, abandoning the careful policy of balance held by his father, he conquered Brescia (1332), Parma (1335) in Lombardy and Lucca (1335) in Tuscany.

However, the extension of Mastino's power spurred the creation of League of all the other local powers (Florence, Siena, Bologna, Perugia and Venice). In the first year of war he managed to resist, but in 1336 the League was joined by Azzone Visconti of Milan, the Este of Ferrara, the Gonzaga of Mantua and the Papal States. Surrounded by every side, he could only ask for a treaty of peace through the intermediation of Emperor Louis IV of Bavaria, which he obtained in 1339. His territories were restricted to Verona and Vicenza, the remaining part split among the victorious enemies.

An attempt to recover part of his lands with the German mercenaries that had remained in Vicenza after the war, led by Lodrisio Visconti, was unsuccessful.

He died in Verona in 1351. He his buried in the Gothic mausoleum near the church of Santa Maria Antica, in one of the famous Scaliger Tombs.

In 1328 he married Taddea da Carrara (daughter of Jacopo I of Padua) and Anna Gradenigo. She gave him the following three legitimate sons and one daughter:

His illegitimate children include: