A drying oil is an oil that hardens to a tough, solid film after a period of exposure to air. The oil hardens through a chemical reaction in which the components crosslink by the action of oxygen (not through the evaporation of water or other solvents). Drying oils are a key component of oil paint and some varnishes. Some commonly used drying oils include linseed (flax seed) oil, tung oil, poppy seed oil, perilla oil, and walnut oil. Their use has declined over the past several decades, as they have been replaced by alkyd resins and other binders.

Since oxidation is the key to curing in these oils, those that are susceptible to chemical drying are often unsuitable for cooking, and are also highly susceptible to becoming rancid due to autoxidation, the process by which fatty foods develop off-flavors.[1] Rags, cloth, and paper saturated with drying oils may combust spontaneously (ignite) in a few hours, due to accumulation of heat released during the oxidation process.

Chemistry of the drying process

The "drying", hardening, or, more properly, curing of oils is the result of autoxidation, the addition of oxygen to an organic compound and the subsequent crosslinking. In this process, O2 inserts into C-H bonds adjacent to double bonds within the unsaturated fatty acids. The resulting hydroperoxides are susceptible to crosslinking reactions. Bonds form between neighboring fatty acid chains, resulting in a polymer network, often visible by formation of a skin-like film on samples. This polymerization results in stable films that, while somewhat elastic, do not flow or deform readily. Diene-containing fatty acid derivatives, such as those derived from linoleic acid, are especially prone to this reaction because they generate pentadienyl radicals. Monounsaturated fatty acids, such as oleic acid, are slower to undergo drying because the allylic radical intermediates are less stable (i.e., slower to form).[2] 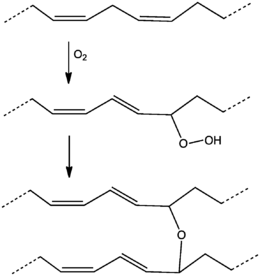 Simplified chemical reactions associated with cobalt-catalyzed drying process. In the first step, the diene undergoes autoxidation to give a hydroperoxide. In the second step, the hydroperoxide combines with another unsaturated side chain to generate a carbon-based radical that is capable of further polymerization.

The early stages of the drying process can be monitored by weight changes in an oil film. The film becomes heavier as it absorbs oxygen. Linseed oil, for instance, increases in weight by 17 percent.[3] As oxygen uptake ceases, the weight of the film declines as volatile compounds evaporate. As the oil ages, further transitions occur. A large number of the original ester bonds in the oil molecules undergo hydrolysis, releasing individual fatty acids. Some portion of these free fatty acids (FFAs) react with metals in the pigment, producing metal carboxylates. Together, the various non-cross-linking substances associated with the polymer network constitute the mobile phases. Unlike the molecules that are part of the network itself, they are capable of moving and diffusing within the film, and can be removed using heat or a solvent. The mobile phase may play a role in plasticizing paint films, preventing them from becoming too brittle. Carboxyl groups in the polymers of the stationary phase ionize, becoming negatively charged and form complexes with metal cations present in the pigment. The original network, with its nonpolar, covalent bonds, is replaced by an ionomeric structure, held together by ionic interactions. The structure of these ionomeric networks is not well understood.

Most drying oils rapidly increase in viscosity after heating in the absence of air. If the oil is subjected to raised temperatures for a long time, it will become a rubbery oil-insoluble substance.[3]

The drying process is accelerated by certain metal salts, especially derivatives of cobalt, manganese, or iron. In technical terms, these oil drying agents are coordination complexes that function as homogeneous catalysts. These salts are derived from the carboxylates of lipophilic carboxylic acids, such as naphthenic acids to make the complexes oil-soluble. These catalysts speed up the reduction of the hydroperoxide intermediates. A series of addition reactions ensues. Each step produces additional free radicals, which then engage in further crosslinking. The process finally terminates when pairs of free radicals combine. The polymerization occurs over a period of days to years and renders the film dry to the touch. Premature action of the drying agents causes skinning of the paint, this undesirable process is suppressed by the addition of antiskinning agents such as methylethyl ketone oxime, which evaporate when the paint/oil is applied to a surface.

Comparison to waxes and resins

Non-"drying" waxes, such as hard-film carnauba or paste wax, and resins, such as dammar, copal, and shellac, consist of long, spaghetti-like strands of hydrocarbon molecules, which interlace and compact but do not form covalent bonds in the manner of drying oils. Thus, waxes and resins are re-dissoluble whereas a cured oil varnish or paint is not.

Rags, cloth, and paper saturated with drying oils may combust spontaneously (ignite) due to heat released during the curing process. This hazard is greater when oil-soaked materials are folded, bunched, or piled together, which allows heat to accumulate and accelerate the reaction. Precautions include: wetting rags with water and spreading them away from direct sunlight; closing them off completely in water inside air-tight metal containers designed for such applications; or storing them immersed in solvents in suitable closed containers.