Church of the Holy Name of Jesus, Manchester

Church of the Holy Name of Jesus, Manchester 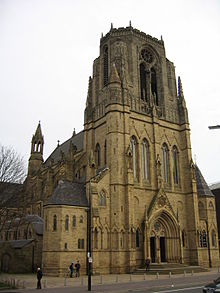 The Church of the Holy Name of Jesus is located on Oxford Road in the heart of Manchester University's campus in Manchester, England and next door to the University hospitals. It was built between 1869 and 1871 and designed by Joseph A. Hansom & Son. The present tower, designed by Gilbert Scott, was erected in 1928 in memory of the famous Rector of the church, Fr Bernard Vaughan, SJ. The building is a Grade I listed building, and was granted this on 5 April 1989, being upgraded from a Grade II* listed building, which was granted on 18 December 1963.[1]

In 1860, the first bishop of the Diocese of Salford, Bishop Turner, invited the Jesuits to make a home at Manchester, in Chorlton-on-Medlock, which was an important middle class suburb. As well as the growing middle-classes, Manchester was home to a large and expanding population of Irish Immigrants, lured by cotton manufacturing and the consequences of the Great Irish Famine. In the area known as Little Ireland (a stretch of low grade amenity terraces built to serve the urban poor in the centre of the city), perceived un-godliness was a growing trend. The Parish of St Mary's, Mulberry Street was unable to cope; in the previous 20 years, 13 priests had succumbed to Typhus, whilst working amongst the city's poor.

The Jesuits had a formidable record of outreach and missionary work, and this was put to good use. They were also used in answering the controversial claims of the Church of England to be the successor of St Augustine. Whilst at the Holy Name Fr Vaughan took part in a famous series of debates with the Anglican bishop of Manchester, over the rival claims of both parties to be the Catholic Church in England. In their jubilation at Vaughan's triumph, the young men of the Holy Name pulled his carriage from the city centre all the way to the church. 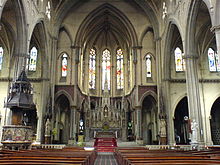 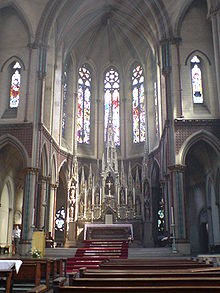 Bishop Turner was keen to have a church in the up-and-coming area of Chorlton-on-Medlock staffed with priests who could meet the demands of intellectual, apologetic and controversial needs of Manchester. The Jesuits from St Helens came to settle here, at first in a temporary church (now the site of the Holy Name Hall, which has since been sold). As well as this intellectual need, the Holy Name was made a parish church to meet the growing populations of the neighbouring parishes of Longsight and Chorlton-on-Medlock, as the large villas were replaced by streets as the population of industrial Manchester grew. The construction of the building re-inforced the power of the Jesuit order and the revived confidence of the English Catholics (it is the largest church in Manchester, and dominates the surrounding area).

The building's dimensions and proportions are on the scale of a fourteenth century cathedral; it is 186 feet long east to west and 112 feet wide. The architect Joseph Aloysius Hansom (who gave his name to the Hansom Cab) based the building on Frankish gothic styles of France. Pevsner described it as " ... a design of the very highest quality and of an originality nowhere demonstrative ... Hansom never again did so marvellous a church." Although mediaeval in appearance, it is a counter-Reformation church, designed to teach the faith through its external liturgical and devotional manifestation. It gives maximum exposure to the solemn celebration of the Mass (a raised altar near the congregation with no rood screen, and a shallow, broad sanctuary), the cult of the Eucharist (the eye is first carried to the tabernacle and the expositon throne above), preaching (a large pulpit to place the preacher intimately in the congregation), and the hearing of confessions (the whole north side is taken up with confessionals designed for long hours of priestly ministration). Consequently, the pillars in the church are unusually slender, accomplished by making the roof of the church from hollow terracotta tubes.

Although built in brick it was clad in brushed Warwick stone. It has been suggested that Hansom's original design originally called for a broad steeple 73 feet high (although how seriously this was considered is disputed). In 1928 the tower was built, designed by Giles Gilbert Scott, and is similar to his tower at the Anglican cathedral at Liverpool and his iconic red telephone box. The church structure itself is sixty years older than the tower, and the stonework doesn't match, one part looking much fresher than the other (which is the result of recent cleaning and pointing work to the body of the church).

In total, the nave can accommodate 800 worshippers. Small chapels adorn the left hand side, along with the baptistery towards the west. On the north side of the building are confessionals, each with its own fireplace. Between each of the confessions and the chapels are the Stations of the Cross. Throughout the church there are devotional statues and images, always with candles burning before them.

The Masses at the Holy Name are celebrated in English and towards the east ('ad orientem' - the priest and people all facing the rising sun, offering their prayers as a pilgrim people). The 1962 version of the Tridentine Mass, now an extraordinary form of the Roman Rite, is celebrated at the Holy Name on Sunday afternoons.

At the Holy Name both Latin and English are used for the celebration of Mass. In the years following the Second Vatican Council, it became the almost universal fashion for Mass to be said in the vernacular tongue at the exclusion of Latin, with the priest and congregation facing one another rather than in the same direction towards the crucifix. This celebration was often accompanied by 'folk music'. Nevertheless, Latin remains the official language of the Roman Rite, and the typical editions of all liturgical books are to this day released in Latin.[2] Both Latin and the ad orientem posture are permitted in the Novus Ordo and are practiced at the Holy Name. These celebrations of the liturgy are very well attended, despite the church not being a parish (the church forming a distinct part of the parish of St. Augustine, Chorlton-on-Medlock).

The celebration of the liturgy is designed to be catechetical and attractive, with solemn ritual, beautiful music, popular hymns and a familiar preaching style. It is also user-friendly; given the solemnity of the celebration, still the Solemn Mass never lasts more than an hour.

Weekday Masses are designed to suit the work patterns of the busy city population - 7am and 5.15pm. They are celebrated at the small and more intimate chapels in the church.

Each lunch time there is exposition of the Blessed Sacrament and Benediction, during which confessions are heard. They are also heard from 4.45pm - 5.05pm before the weekday evening Mass, and on Saturday 11.30am - 12.30pm, 3pm - 4pm, 7pm - 8pm.

The organ of the church is located at the West end of the nave. Built in 1871 by William Hill & Son of London,[3] it has forty-eight speaking stops over three-manuals and pedals.[4] The instrument was restored in 2004 and continues to be maintained by David Wells of Liverpool. The lead pipes on the front of the case are ornately diapered. Above the organ and choir loft are two gilded angels. The organ pipes were recently restored to their original colour scheme, lighter shades of red and green with gold motifs (similar colours were to be found in the sanctuary of the church and are due to be restored).

The music for the Solemn Mass follows the recent decrees of the Vatican, and utilises Gregorian chant and polyphony on Sundays (with well known congregational English hymns), and for major solemnities there are classical organ and orchestral settings from the 17th - 21st centuries.

The Jesuits had intended to sell the church (as they did the hall and presbytery) and gave up the parish in 1985. The church was in need of significant and expensive repair, the congregation had dwindled with local shifts in housing and demographics (university and hospital expansion as well as slum clearance), and the church building was closed for most of the day. The diocese did not want it, and so the major superiors of England and Wales were asked to consider its viability. As a consequence, a community of secular Priests and Lay Brothers (an Oratory of St Philip in Formation) came to Manchester in 1992. Since then the church has been in the process of massive renovation project. It is now open every day from early morning until evening, and the congregational numbers have increased.