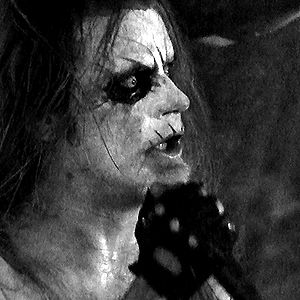 Corpse paint or corpsepaint is a style of black-and-white makeup, used mainly by black metal bands during live concerts and photo shoots. The makeup is used to intensify the bands' imagery of evil, inhumanity, and corpse-like decay. It is most commonly used just on the face, but also on arms and torso. Sometimes it involves other colors than black and white.

Corpse paint generally consists of the musician's face being covered in black and white makeup, with a bigger part of the face being white, and with other areas being black. The parts being black are very often the eye sockets, in different symmetrical shapes, but asymmetrical (being seemingly random painted) occurs as well. The patterns are used as trademarks for the musicians who use corpse paint, and change very seldom. Only rarely do musicians use other colors: Gorgoroth and Ragnarok use blood-colored paint, Attila Csihar of Mayhem, and formerly of Tormentor, uses neon colors, while the Norwegian band Dødheimsgard has experimented using other colors.

Though makeup styles similar to corpse paint achieved widespread popularity with some rock and roll performers in the 60s and 70s, most famously Arthur Brown, Kiss and Alice Cooper, it is debatable whether these were ever a direct influence on the image used in black metal, and there are some earlier precedents worth noting.

The earliest rock groups to decorate themselves with makeup similar to corpse paint included Arthur Brown in the 1960s, Alice Cooper, Secos & Molhados and KISS in the 1970s, and, later that decade, punk rockers like The Misfits and singer David Vanian of The Damned. The look was also to achieve what most bands call "Utter Brutality", it was also unintentionally popularized in 1977 through a series of McDonald's print advertisement campaigns featuring black-and-white photographs of company mascot Ronald McDonald. In the ads, Ronald's face paint looked very similar to corpse paint, causing fans of bands like KISS to collect and even steal copies of magazines with the ads.[citation needed]

Hellhammer and King Diamond of Mercyful Fate (who used corpse paint as early as 1978 in his band Black Rose) were perhaps the first death or black metal groups to use corpse paint in the early 1980s. Other groups soon followed suit, including Hellhammer's later incarnation Celtic Frost. Brazilian band Sarcófago also pioneered the look, being dubbed by Metal Storm magazine as the first band with a "true" corpsepaint.[1] Early corpse paint designs were intended simply to accent an individual's features and make them look "dead". Later designs typically incorporated more detailed patterns to improve a "demonic" look (most notably Immortal and King Diamond).

Norwegian black metal bands from the late 1980s and early '90s (such as Mayhem, Gorgoroth, Emperor, Immortal, Darkthrone, Dimmu Borgir, and Satyricon) are arguably responsible for maintaining the popularity of the corpse paint among today's black metal acts.

Corpse paint has been associated mainly with black metal and metal in general, but it has inspired artists in music and other entertainment businesses: