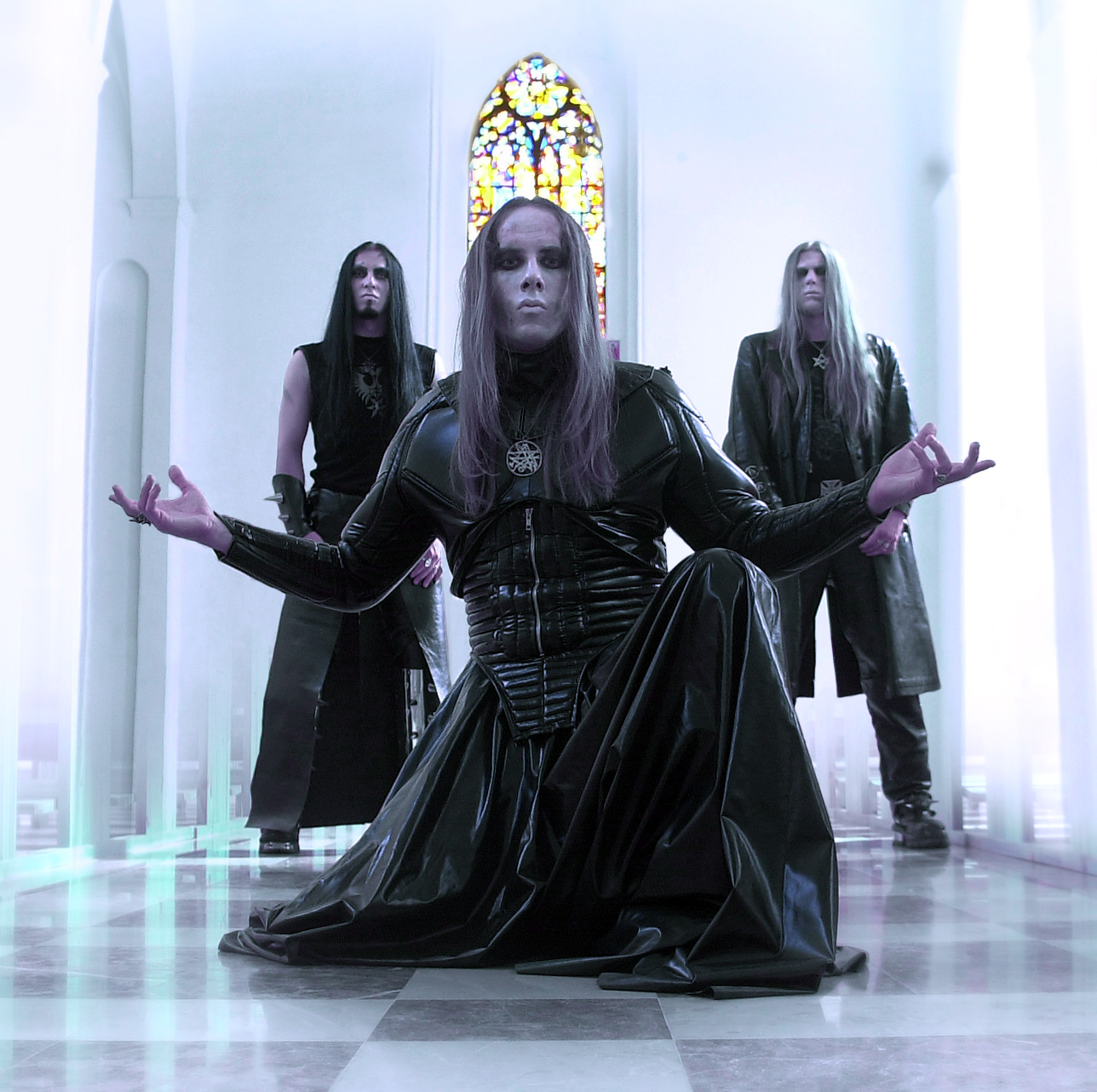 Behemoth (Audio|Pronunciation-Behemoth.ogg|pronunciation) is a Polish

Until the late s, the band played traditional with heathen lyrical content, but soon changed to that of and thelemic themes written by their lead vocalist Nergal and Krzysztof Azarewicz. With the release of "", the band showed their presence in the scene, while retaining their own signature style characterized by the drum work of Inferno, multi-layered vocals and Nile-style Middle-Eastern influences. Even though Behemoth has been labeled as , or thrash influenced, Nergal has mentioned that he doesn't like the band to be labeled Fact|date=July 2008.

Behemoth was formed in 1991 as a trio, starting with raw and primitive rehearsal tapes ("") and demos ("The Return of the Northern Moon"), the most significant of which was the second one—"" (1993)—showing the growing potential of the then teenage Nergal.Fact|date=July 2008

This tape was released by Polish label and later on by the American Wild Rags. Signing with a little-known black metal bands from mid-eastern Europe with enormous potential. Consequently, stepping forward, the band (as the three piece with Nergal, Baal, and Les) recorded their second album "Grom".

"Grom" has been the most discussed release thus far, due to its many different influences and musical styles, using female vocals as well as acoustic guitars and synthesizers. At the same time, Behemoth finally got a chance to play live shows in its native country and finally tour around Europe, gaining stage experience as well as positive feedback from the audience. Two years later, the band recorded a third album, titled "" which was a "breakthrough moment" in Behemoth's short career. The reactions of their ever-increasing fanbase and metal media set a new standard for them.Fact|date=July 2008 However, due to a lack of promotion, the album was not well-publicized. After another extensive tour, Behemoth signed a two-album deal with Italy's in the fall of 1998. The first result of this new collaboration was the successfulFact|date=July 2008 album "", on which the black metal sound had evolved into .

The label also secured two European tours for the band in support of Deicide and Satyricon respectively. During that period, Behemoth had to go through some line-up changes and problems with their ex-Polish label. The new members then were Novy (formerly known from , now in Vader, Dies Irae) who handled the bass duties and Havok who became the band's guitarist. The new line-up resulted in Behemoth signing with Mystic, a Polish label. The next follow-up release to "Satanica" was "". Massive guitar parts and precise drumming, with influences from different sources, showed that Behemoth were there to offer something really varied and innovative once againFact|date=July 2008, complete with characteristic fierce brutality and speed. Arrangements and technical invention on individual compositions made the album an ultimate oneFact|date=July 2008Fact|date=July 2008Fact|date=July 2008 for the genre.

"Thelema.6" has been supported by the world-wide press and mediaFact|date=July 2008, including having their album being officially released in Russia and Brazil for the first time. Continuing the support for "Thelema.6", Behemoth appeared in several prestigious live events like , , , Mystic Festival, and Mind Over Matter Autumn. They started first headlining tour alongside with and , followed by festival tour in Poland (Thrash em All Fest. with Vader and , among others).

In 2001, Behemoth focused on writing new material for a sixth studio album. Meantime, they completed their second headlining tour in Russia, Belarus and Ukraine. Having completed the recording of their new songs, Behemoth entered Hendrix Studio for the second time, with help of their friend and sound engineer Arkadiusz Malczewski, and produced "". The result was impressive and overwhelming for their detractors who thought that the band couldn't reach newer heights following "Thelema.6". Fact|date=July 2008In February 2003, the band started their first tour in , playing in cities such as , and . On March 11, 2003, the American premiere, scheduled by Records, headlined Behemoth's first appearance in the US continent. The tour started on the 9th of March at the New Jersey's Metalfest and continued with a decent amountFact|date=July 2008 of shows across America and Canada, with the company of Deicide, Revenge, and . Shortly after doing their first US tour the band was invited to join the Blackest of the Black Tour by . The already legendary festival included acts like , , Nile, and . In the fall of 2003, Behemoth flew over to US to complete their third tour with Six Feet Under, and . The band did their Finnish debut appearance on the famous Tuska Festival with Ministry, , among others. At that time, due to some line up difficulties, Nergal parted his ways with Havok and Novy, who decided to focus on activities with their own bands. Eventually, the band resumed touring in the UK and Europe.

In 2004, their seventh studio album, "Demigod" was released to good critical response. Recorded at the Hendrix Studios, the album debuted at number 15 on the national Polish album charts. Music videos for the songs "Conquer All" and "Slaves Shall Serve" were also shot.

In 2007, the band toured Europe alongside , and . Behemoth released their eighth studio album "" in July of that year. It was recorded at Radio Gdańsk studio in December, 2006. Shortly after the release of The Apostasy, the band was featured as one of 2007's second stage headliners, one of the four non-US bands playing that year. [ [http://www.metalunderground.com/news/details.cfm?newsid=27576 Ozzfest] ] In October/November 2007, they played their first US and Canadian headlining tour alongside , Gojira, and . [ [http://www.apeshit.org/2007/08/14/job-for-a-cowboy-behemoth-to-co-headline-radio-rebellion-tour/ Radio Rebellion Tour] ] In October/November 2007 the band toured Europe alongside Canadian death metal combo and Belgium's . In February 2008 Behemoth toured Europe headlining over . In April/May 2008 the band toured North America as part of "The Invaluable Darkness" tour with and headliner . Behemoth spent the summer playing a number of prominent festivals all over Europe.

In October 2008, Behemoth will release their first live album,. Also, an EP called Ezkaton will be released featuring a re-recorded version of Chant for Eschaton, one new song, two covers, and three live songs. The EP will be released in North America on November 11.

Behemoth may at some point become banned from playing in their native country, . In July 2007 the All-Polish Committee for Defense Against Sects distributed a list of bands that allegedly promote and to many Polish officials. Critics of this policy primarily see this as a violation of free speech, with the most scathing criticism generally eminating from within the metal community. As of present, the list has not gone into effect, and Behemoth is still allowed to play in Poland freely, but the band provoked further controversy in February 2008 when an official complaint had been registered by the committee, which cited a bible-tearing incident on behalf of frontman Nergal at a concert in September 2007. [ [http://www.ultimate-guitar.com/news/general_music_news/marilyn_manson_behemoth_banned_to_perform_in_poland.html Marilyn Manson and Behemoth Banned to Perform in Poland: News @ ultimate-guitar.com] ] [ [http://www.roadrunnerrecords.com/blabbermouth.net/news.aspx?mode=Article&newsitemID=89919 Behemoth banned to perform in Poland/Bible-tearing incident: News @ blabbermouth.net] ]