Mayhem is a Norwegian black metal band formed in 1984 [2] in Oslo, Norway and regarded as one of the pioneers of the influential Norwegian black metal scene. Mayhem's career has been highly controversial, primarily due to their violent stage performances, the suicide of early vocalist Per Yngve Ohlin in 1991 and the murder of guitarist Øystein Aarseth by former band member Varg Vikernes, then of Burzum, in 1993.

Inspired by groups such as Venom, Slayer, Motörhead and Celtic Frost,[3] Mayhem was founded in 1984 by guitarist/vocalist Øystein Aarseth (aka Euronymous), bass guitarist Jørn Stubberud (aka Necrobutcher), and drummer Kjetil Manheim (aka Manheim). The band name is taken from the Venom song, "Mayhem with Mercy".[4] This lineup recorded and released the demo Pure Fucking Armageddon. After its release, Euronymous concentrated solely on guitar after recruiting first Eirik Nordheim (Messiah), then Sven Erik Kristiansen (aka Maniac) as vocalists in 1986. With Maniac, Mayhem recorded the band's first EP, Deathcrush in 1986 and 1987, and released it through Euronymous's newly formed label Posercorpse Music.

The initial 1,000 copy release of Deathcrush quickly sold out. It was later reissued in 1993 by the newly renamed Deathlike Silence Productions as a joint venture with Euronymous's Oslo specialist record shop Helvete.

By mid-1988 both Manheim and Maniac had left the band.

After two brief replacements, their positions were filled by Swedish vocalist Per Yngve Ohlin (aka Dead) and local drummer Jan Axel Blomberg (aka Hellhammer). According to Bård Eithun of the band Emperor:

He (Dead) wasn't a guy you could know very well. I think even the other guys in Mayhem didn't know him very well. He was hard to get close to. I met him two weeks before he died. I'd met him maybe six to eight times, all in all. He had lots of weird ideas. I remember Aarseth was talking about him and said he did not have any humor. He did, but it was very obscure. Honestly, I don't think he was enjoying living in this world.[5]

With Dead as vocalist, the band's concerts became notorious. Whilst performing, Dead would often cut himself with hunting knives and broken glass.[6] Additionally, the band often had pig or sheep heads impaled on stakes and planted at the front of their stage.[6]

At some point in 1990, the members of Mayhem moved to "an old house in the forest" near Oslo.[7] They began writing songs for their next album, De Mysteriis Dom Sathanas. On 8 April 1991, Dead committed suicide in the house owned by the band. He was found by Euronymous with slit wrists and a shotgun wound to the head. Dead's suicide note notably read "Excuse all the blood, cheers." and included an apology for firing the weapon indoors. Instead of calling the police, Euronymous went to a nearby store and bought a disposable camera to photograph the corpse, after re-arranging some items.[8] One of these photographs was later stolen and used as the cover of a bootleg live album entitled Dawn of the Black Hearts.[9]

Eventually, rumors surfaced that Euronymous made a stew with pieces of Dead's brain, and made necklaces with fragments of Dead's skull. Additionally, Euronymous claimed to have given these necklaces to musicians he deemed worthy.

According to Stian Johannsen (aka Occultus), who briefly took position as vocalist after Dead's suicide:

He (Dead) didn't see himself as human; he saw himself as a creature from another world. He said he had many visions that his blood has frozen in his veins, that he was dead. That is the reason he took that name. He knew he would die.[10]

Dead's suicide affected Necrobutcher so much that he left Mayhem, thinning the band's ranks down to two. In 1993, Live in Leipzig was released as the band's tribute to Dead.

Later that year, the recording of Mayhem's upcoming album, De Mysteriis Dom Sathanas resumed. In Dead's and Necrobutcher's absences, Attila Csihar of Tormentor handled vocals, and Varg Vikernes of Burzum handled bass guitar. Due to adverse media and police attention, Euronymous was forced around this time to close his scene focal point record shop Helvete. Much of the album was recorded during the first half of 1993 at the Grieg Hall in Bergen. To coincide with the release of the album, Euronymous and Vikernes had conspired to blow up Nidaros Cathedral, which appears on the album cover. Euronymous's murder in August 1993 put an end to this plan and delayed the album's release.[11]

On 10 August 1993, Varg Vikernes murdered guitarist Euronymous. On that night, Vikernes and Snorre Ruch travelled from Bergen 518 km to Euronymous’s apartment in Oslo. Upon their arrival a confrontation began, which ended when Vikernes fatally stabbed Euronymous. His body was found outside the apartment with twenty-three cut wounds – two to the head, five to the neck, and sixteen to the back.[12] Vikernes claims that Euronymous had plotted to torture him to death and videotape the event – using a meeting about an unsigned contract as a pretext.[13] On the night of the murder, Vikernes claims he intended to hand Euronymous the signed contract and "tell him to fuck off", but that Euronymous attacked him first.[13] Additionally, Vikernes defends that most of Euronymous’s cut wounds were caused by broken glass he had fallen on during the struggle.[13] Regardless of the circumstances, Vikernes was arrested within days, and a few months later he was sentenced to 21 years in prison for both the murder and church arsons.[13] With only Hellhammer remaining, Mayhem effectively ceased to exist.

In May 1994, De Mysteriis Dom Sathanas was released and formally dedicated to Euronymous. Its release had been delayed due to complaints filed by Euronymous's parents, who had objected to the presence of bass guitar parts played by Vikernes. According to Vikernes himself, Hellhammer assured Aarseth's parents that he would re-record the bass tracks himself. Apparently Hellhammer did not do this, so the album features Vikernes' original bass tracks.[14] 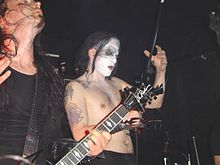 By late 1995 Hellhammer had decided to reform the band with the help of new guitarist Rune Eriksen (aka Blasphemer) and two previous Mayhem members - Maniac and Necrobutcher. The first release of this new lineup was a 1997 EP titled Wolf's Lair Abyss, and was followed by some live European shows. One of these took place in Milan, Italy, guest starring Attila Csihar, and was recorded for the Mediolanum Capta Est live album of that year.

In this new phase, racist statements made by Hellhammer (who spoke out against race mixing and foreigners in Norway[15]) and the use of Nazi imagery such as swastika flags in the rehearsal room,[16] the Totenkopf emblem[17][18] and band merchandise featuring the symbol of the military branch of Nasjonal Samling led to controversy and accusations of neo-Nazism.

In 2000 the band's second full-length CD, Grand Declaration of War, was released. Strongly influenced by progressive and avant-garde metal, the album was concept-based, dealing with themes of war and post-apocalyptic destruction. Maniac largely abandoned the traditional black metal rasp for dramatic spoken-word monologue, with most of the songs sequencing seamlessly into one another. Reaction to the album was polarized. Some criticised the album for its avant-garde and electronic elements, which they perceived as pretentious, and for Maniac's vocals, which they perceived as inferior to Dead's and Attila's. Others saw it as a laudable attempt to recreate and redefine black metal, with critic Brian Russ of BNR Metal going so far as to call it "really the first cohesive work the band has ever done" and "a fitting culmination to their career thus far." In retrospect, the electronic elements of the album were often heavily overstated by its detractors, appearing notably in only a single track, "A Bloodsword and a Colder Sun." It should also be noted that from Wolf's Lair Abyss up to the present, Blasphemer has written all of the music for Mayhem's releases. Maniac wrote the lyrics from the reformation of the band until his departure in 2004.

In May 2003, Mayhem made headlines again when a Mayhem fan, Per Kristian Hagen, landed in the hospital with a fractured skull after being hit by a severed sheep's head that had been thrown into the audience from the stage. Assault charges were filed, but the band considered it to have been entirely accidental.[19][20][21]

In 2004, Mayhem released Chimera. It showed a return to their earlier raw and brutal style, but with considerably better production values than earlier releases. Chimera still maintained a progressive edge. In 2004, Maniac was forced out of the band, according to Necrobutcher, because of stage fright-induced alcoholism.[6] Necrobutcher also stated that because of this, a violent encounter ensued between the singer and Blasphemer, during which the guitarist kicked Maniac down a flight of stairs and hit his head face first into a wall.[6] Attila Csihar was reinstated as his replacement.

Attila Csihar, live with Mayhem at Hole in the Sky 2007

The band's fourth full-length album, titled Ordo ad Chao (Latin for "Order to Chaos"), was released in April 2007. Ordo ad Chao contains a much rawer sound than the rest of the band's recent work; the drums are not equalized and the mix is notably bass-heavy (black metal typically lacks bass). The album continues the band's experiments with unorthodox song structures, with "Illuminate Eliminate," at 9:40, being the band's second longest track to date (behind Grand Declaration of War’s "Completion in Science of Agony (Part I)" at 9:44). The album received strong reviews and was the band's highest-charting album to date, peaking at #12 on the Norwegian charts. In early 2008 Ordo Ad Chao won a Spellemannprisen (the largest and oldest of Norway's music awards shows) for Best Metal Album of 2007.

In April 2008, Blasphemer decided to leave the band. "The main reason behind this conclusion lies in the fact that I simply don't see any future for me in the band anymore, at least not a future I'd like to participate in over the coming years," he wrote in a statement posted to the band's website on April 22.[22] "I've been playing my part in the band now for more than 13 years already, having composed, produced and released several albums with great vision, dedication and craftsmanship, to arrive at this crossroad of opposites. Sooner or later, all things comes to an end, and in my case, this circle is complete."[23] Blasphemer also said he will continue working with the Portuguese band Ava Inferi.[22]

Blasphemer played European festival dates with the band through the summer months of 2008, playing his last gig with the group in August. This marked the departure of the musician credited with the bulk of the musical composition of the band's three most recent studio albums.

Statements of touring plans for late 2008/early 2009 were announced on the band's web page a few weeks after their final dates with Blasphemer, prior to any word on new members. In October 2008, it was announced that a musician named Morfeus (Dimension F3H/Limbonic Art) had "joined forces" with Mayhem as guitarist for their upcoming South America Fucking Armageddon tour, replacing Blasphemer.

The band toured through late 2008 and 2009 with this lineup, prior to announcing Summer 2009 dates with a French metal musician calling himself Silmaeth on second guitar. Both Morfeus and Silmaeth are presently considered touring (as opposed to full-time) members. In November 2009, the band was arrested in Tilburg, Netherlands, after destroying a hotel room while on tour.[24] In September 2010 Mayhem performed their first ever show in New Zealand, as part of an Australian tour. [25]