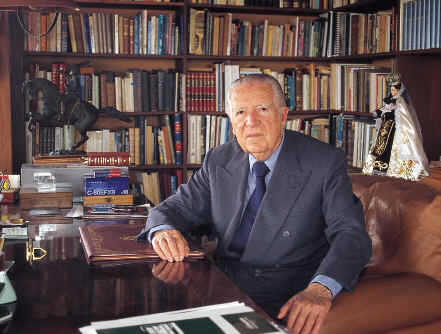 Fernando Belaúnde Terry (, &ndash; , ) was for two terms (1963&ndash;1968 and 1980&ndash;1985). Deposed by a military coup in 1968, he was re-elected in 1980 after twelve years of military rule. During both terms, economic turbulence and the increase of terrorist activities in the country led to violations by both insurgents and the Peruvian armed forces. Nevertheless, he was recognized for his personal integrity and his commitment to the democratic process.

The second of four children, Belaúnde was born in into an upper-class family of Spanish forebears. During the dictatorship of Augusto B. Leguía, the persecution for the political activities of his father Rafael and his uncle prompted the family to move to in 1924, where Fernando attended high school and received his initial University education in engineering.

From 1930 to 1935, Belaúnde studied in the , where he first attended the (where his father was also teaching), and in 1935 transferred to the , where he obtained his degree as an architect. He later moved to and worked as an architect for a brief time, but returned to Peru in 1936 and started his professional career as an architect designing private homes. In 1937, he started a magazine called "El Arquitecto Peruano" ("Peruvian Architect"), which dealt with interior design, general urbanism and housing problems the country was facing. This also gave way to the Architects Association of Peru and the Urbanism Institute of Peru.

As a result, Belaúnde also became a government public-housing consultant throughout the country and abroad. In 1943, Belaúnde began teaching architecture and at Escuela Nacional de Ingenieros of Lima and later became the dean of the Civil Engineering and Architecture department. Belaúnde also directed the construction, along with other professors and students, of the faculty of architecture of the in 1955.

Belaúnde's political career began in 1944 as cofounder of the National Democratic Front party which successfully elected José Bustamante as President in 1945; he served in the Peruvian Congress until a coup by General Manuel Odría in 1948 interrupted democratic elections.

Belaúnde would return to the political arena in 1956, when the outgoing Odría dictatorship called for elections and he led the slate submitted by the "National Front of Democratic Youth", an organization formed by reform-minded university students, some of which had studied under him; his principled support for the "La Prensa" newspaper, which had been closed down by the dictatorship in early 1956, had prompted the leadership of the National Front to approach him as to lead its slate.

He gained notoriety on June 1 of the same year when, after the national election board refused to accept his candidacy filing, he led a massive protest that became known as the "manguerazo" or "hosedown" from the powerful water cannons used by the police to repress the demonstrators. When the confrontation looked to turn violent, Belaúnde showed the gift for symbolism that would serve him well throughout his political life; calming down the demonstrators and armed solely with a Peruvian flag, he crossed alone the gap separating the demonstrators from the police to deliver an ultimatum to the police chief that his candidacy be accepted.

The government capitulated, and the striking image of Belaúnde walking by himself with the flag was featured by the news magazine "" the following day, in an article entitled "Así Nacen Los Lideres" ("This is how Leaders are Born").

Belaúnde's 1956 candidacy was ultimately unsuccessful, as the dictatorship-favored right-wing candidacy of Manuel Prado took first place. Claiming irregularities, he prepared to lead the opposition, and in July 1956 in Chincheros, Cuzco, founded the Acción Popular party, claiming the mantle of recapturing indigenous Inca traditions of community and cooperation in a modern social democratic context, placing itself squarely between the pro-oligarchy right-wing and the radicalism of the left-wing APRA and communist parties.

He would go on to travel extensively throughout the country, fleshing out the ideological principles of Acción Popular, while leading the opposition. During this period Belaúnde's traditionalism would manifest itself in dramatic flourishes, most notoriously when he challenged to a duel a Pradista congressman who refused to retract insulting statements in an open letter; the duel took place, with minor scratches on both sides.

In 1959, the Prado government's refusal to authorize the permits for Accion Popular annual convention led to another confrontation: Belaúnde led the opening of the convention in defiance of the prohibition, and the Prado government arrested and jailed him in the Alcatraz-like island prison of off the Lima coast. The imprisonment lasted 12 days, during which Belaúnde engaged in a failed attempt to escape by swimming to freedom; the Prado government, facing unrelenting public pressure, was forced to release him and drop all charges.

Belaúnde ran for president once again in the general elections of 1962, this time with his own party, "Acción Popular." The results were very tight; he ended in second place, following (APRA), by less than 14000 votes. Since none of the candidates manage to get the Constitutionally-established minimum of one third of the vote required to win outright, selection of the President would fall to Congress; the long-held antagonistic relationship between the military and APRA prompted Haya de la Torre to make a deal with former dictator Odría, who had come in third, which would result in Odría taking the Presidency in a coalition government.

However, widespread allegations of fraud prompted the Peruvian military to depose Prado and install a military junta, led by . Pérez Godoy ran a short transitional government and held new elections in 1963, which were won by Belaúnde by a more comfortable but still narrow five percent margin.

During Belaúnde's first term in office, he spurred numerous developmental projects. These included the "Carretera Marginal de la Selva", a much-needed highway linking Chiclayo on the Pacific coast with then isolated northern regions of Amazonas and San Martín.

He also advanced the ambitious Santiago Antunez de Mayolo and Chira Piura irrigation projects, and the Tinajones, Jequetepeque, Majes, Chavimochic, Olmos, Chinecas hydroelectric projects. Belaúnde also oversaw the establishment of the Peruvian National Bank (Banco de la Nación). To alleviate poverty, Belaúnde also promoted a program of "social interest" homes in Lima and other cities, which benefited dozen thousands of families. However, his administration was also blamed for making bad economic decisions, and by 1967 the sol was seriously devaluated.

In August 1968, the Belaúnde Administration announced the settlement of a long-standing dispute with a subsidiary of over claims to the rich La Brea and Pariñas oil fields. However, widespread anger about Belaúnde's decision to pay the Standard Oil compensation for handing over the installation to Peru forced his cabinet to resign on .

A further cause of anger was the fact that the document of agreement was given by Belaunde to the press with the final page eleven missing and signatures were squeezed at the bottom of page ten. The missing page eleven became a "cause célèbre" and was later shown on television containing the contribution that Belaúnde had promised to pay. Several days later, Belaúnde himself was removed from office by a military coup.

Exile and return to democracy

Belaúnde spent the next decade in the United States, teaching at Harvard and other universities. Meanwhile, the radical military regime established by General Velasco instituted sweeping but ill-fated reforms. In April 1980, with Peru's economy in deep depression, the military administration permitted an election for the restoration of constitutional rule. Belaúnde won a five-year term, polling an impressive 45 percent of the vote in a 15-man contest.

One of his first actions as President was the return of several newspapers to their respective owners. In this way, once again played an important part in Peruvian politics. Gradually, he attempted to undo some of the most radical effects of the "Agrarian Reform" initiated by Velasco, and reversed the independent stance that the Military Government of Velasco had with the United States.

At the outbreak of the 1982 between and Britain, Belaúnde declared that "Peru was ready to support Argentina with all the resources it needed." This included a number of fighter planes from the , ships, and medical teams. Belaunde's government proposed a peace settlement between the two countries, but the British rejected it and launched an attack on the Argentinian forces deployed around the islands. In response to Chile's support of Britain, Belaúnde called for Latin American unity.

In domestic policy, he continued with many of the projects that were planned during his first term, including the completion of what is considerated his most important legacy, the "Carretera Marginal de la Selva" a much-needed roadway linking on the Pacific coast with then isolated northern regions of Amazonas and San Martín.

After a promising beginning, Belaúnde's popularity eroded under the stress of inflation, economic hardship, and : declined, Peru's burgeoned, and violence by leftist insurgents (notably ) rose steadily during the , which was launched the day before Belaúnde was elected in 1980.

Regarding Shining Path, Belaúnde personally did not pay too much attention to this: insurgent movements were already active during his first term, but without much support. In addition, some government officials and insurgents were subsequently accused of , and a was promulgated in the and Apurímac regions.

During the next years, the economic problems left over from the Military Government persisted, worsened by an occurrence of the "El Niño" weather phenomenon in 1982–83, which caused widespread flooding in some parts of the country, severe droughts in others, and decimated the schools of ocean fish that are one of the country's major resources.

During the national elections of 1985, Belaúnde's Party, "Acción Popular", was defeated by APRA candidate . However, as established in the 1979 Constitution, he would go on to serve in the Peruvian Senate as "Senador Vitalicio" (""), a privilege for former Presidents abolished by the 1993 Constitution.

Belaúnde died in Lima in 2002 at age 89 with the most spectacular funeral ever held for a former President in the country's history. Thousands of admirers flooded the streets of Lima to pay their final respects to the man many considered the father of Peru's modern democracy.