August position of the ITCZ and monsoon trough in the Pacific Ocean, depicted by area of convergent streamlines in the northern Pacific

The monsoon trough is that portion of the Intertropical Convergence Zone (ITCZ) which extends into or through a monsoon circulation,[1][2] as depicted by a line on a weather map showing the locations of minimum sea level pressure,[1] and as such, is a convergence zone between the wind patterns of the southern and northern hemispheres. Westerly monsoon winds lie in its equatorward portion while easterly trade winds exist poleward of the trough.[3] Right along its axis, heavy rains can be found which usher in the peak of a location's respective rainy season. As it passes poleward of a location, hot and dry conditions develop. The monsoon trough plays a role in creating many of the world's rainforests.

The term "monsoon trough" is most commonly used in monsoonal regions of the Western Pacific such as Asia and Australia. The migration of the ITCZ/monsoon trough into a landmass heralds the beginning of the annual rainy season during summer months. Depressions and tropical cyclones often form in the vicinity of the monsoon trough, with each capable of producing a year's worth of rainfall in a relatively short time frame.

February position of the ITCZ and monsoon trough in the Pacific Ocean, depicted by area of convergent streamlines offshore Australia and in the equatorial eastern Pacific

Monsoon troughing in the western Pacific reaches its zenith in latitude during the late summer when the wintertime surface ridge in the opposite hemisphere is the strongest. It can reach as far as the 40th parallel in East Asia during August and 20th parallel in Australia during February. Its poleward progression is accelerated by the onset of the summer monsoon which is characterized by the development of lower air pressure over the warmest part of the various continents.[4][5][6] In the southern hemisphere, the monsoon trough associated with the Australian monsoon reaches its most southerly latitude in February,[7] oriented along a west-northwest/east-southeast axis. 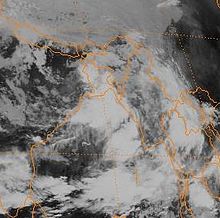 If a circulation forms within the monsoon trough, it is able to compete with the neighboring thermal low over the continent, and a wind surge will occur at its periphery. Such a circulation which is broad in nature within a monsoon trough is known as a monsoon depression. In northern hemisphere, monsoon depressions are generally asymmetric, and tend to have their strongest winds on their eastern periphery. [9] Light and variable winds cover a large area near their center, while bands of showers and thunderstorms develop within their area of circulation.[10]

The presence of an upper level jet stream poleward and west of the system can enhance its development by leading to increased diverging air aloft over the monsoon depression, which leads to a corresponding drop in surface pressure.[11] Even though these systems can develop over land, the outer portions of monsoon depressions are similar to tropical cyclones.[12] In India, for example, 6 to 7 monsoon depressions move across the country yearly,[4] and their numbers within the Bay of Bengal increase during July and August of El Niño events.[13] Monsoon depressions are efficient rainfall producers, and can cause a year's worth of rainfall when they move through drier areas such as the outback of Australia.[14]

Since the monsoon trough is an area of convergence in the wind pattern, and an elongated area of low pressure at the surface, the trough focuses low level moisture and is defined by one or more elongated bands of thunderstorms when viewing satellite imagery. Its abrupt movement to the north between May and June is coincident with the beginning of the monsoon regime and rainy seasons across South and East Asia. This convergence zone has been linked to prolonged heavy rain events in the Yangtze river as well as northern China.[2] Its presence has also been linked to the peak of the rainy season in locations within Australia.[15] As it progresses poleward of a particular location, clear, hot, and dry conditions develop as winds become westerly.[16] Many of the world's rainforests are associated with these climatological low pressure systems.[17]

A monsoon trough is a significant genesis region for tropical cyclones. Vorticity-rich low level environments, with significant low level spin, lead to a better than average chance of tropical cyclone formation due to their inherent rotation. This is because a pre-existing near-surface disturbance with sufficient spin and convergence is one of the six requirements for tropical cyclogenesis.[18] There appears to be a 15-25 day cycle in thunderstorm activity associated with the monsoon trough, which is roughly half the wavelength of the Madden-Julian Oscillation, or MJO.[19] This mirrors tropical cyclone genesis near these features, as genesis clusters in 2-3 weeks of activity followed by 2-3 weeks of inactivity. Tropical cyclones can form in outbreaks around these features under special circumstances, tending to follow the next cyclone to its poleward and west. [20] This is different than the Atlantic Ocean, where tropical cyclones mainly form from tropical waves which move offshore Africa, although 2010's Tropical Storm Nicole may have been an exception to this rule. Eastern Pacific Ocean tropical cyclone formation shows a hybrid of these two mechanisms.