Denham Aerodrome (ICAO: EGLD) is an airfield located 1.5 NM (2.8 km; 1.7 mi) east of Gerrards Cross, near Denham, Buckinghamshire, England. It lies beneath London's Class A airspace. VFR entry/exit points are at Maple Cross (CHT) and St Giles Church. Entry lanes and circuit height are at 750 ft (230 m) AGL. It has one paved runway, aligned 06/24, a grass runway also aligned 06/24 which is referred to as the northside grass and one grass runway aligned 12/30. It also has plus substantial hangarage.

Denham Aerodrome has a CAA Ordinary Licence (Number P646) that allows flights for the public transport of passengers or for flying instruction as authorised by the licensee (Bickertons Aerodromes Limited).[2]

There are a number of charter and flight instruction operators based at Denham Aerodrome. Those include the Denham School of Flying, (part of the Cabair Group) in partnership with Buckinghamshire New University (BNU), The Pilot Centre flying school[3], HeliAir,[4] PremiAir,[5] TAA UK,[6] the London Air Ambulance unit, and other corporate and private firms. A restaurant near the control tower is named Biggles, after the fictional airman of that name. 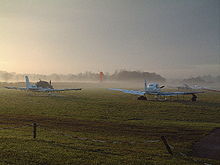 Light aircraft at the aerodrome

There are records that flying has been taking place at Denham Aerodrome since the 1900s. During the First World War, RAF Denham was established as a flying training school for Flight Cadets.[7] The airfield was first licensed as a private use airfield to Squadron Leader J. M. Bickerton by the CAA on 19 May 1938.[8] During the Second World War, the airfield was used again as a training school. The largest based aircraft was a Douglas DC-3 of Gregory Air Services and occasional airshows have been staged here.