If A and B are sets, then the relative complement of A in B, also known as the set-theoretic difference of B and A, is the set of elements in B, but not in A. 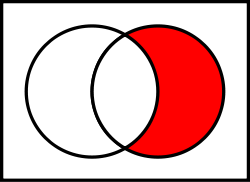 The relative complement of A (left circle) in B (right circle):

The relative complement of A in B is denoted B ∖ A according to the ISO 31-11 standard (sometimes written B − A, but this notation is ambiguous, as in some contexts it can be interpreted as the set of all b − a, where b is taken from B and a from A).

The following lists some notable properties of relative complements in relation to the set-theoretic operations of union and intersection.

If A, B, and C are sets, then the following identities hold: 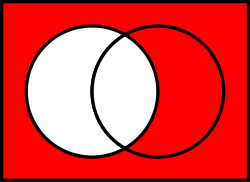 The complement of A in U:

The following lists some important properties of absolute complements in relation to the set-theoretic operations of union and intersection.

If A and B are subsets of a universe U, then the following identities hold:

The first two complement laws above shows that if A is a non-empty, proper subset of U, then {A, Ac} is a partition of U.

In the LaTeX typesetting language, the command \setminus is usually used for rendering a set difference symbol, which is similar to a backslash symbol. When rendered the \setminus command looks identical to \backslash except that it has a little more space in front and behind the slash, akin to the LaTeX sequence \mathbin{\backslash}. A variant \smallsetminus is available in the amssymb package.

Some programming languages allow for manipulation of sets as data structures, using these operators or functions to construct the difference of sets a and b:

SQL
SELECT * FROM B LEFT OUTER JOIN A ON B.COLUMN = A.COLUMN WHERE A.ID IS NULL