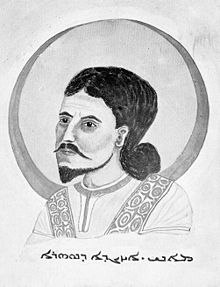 Mani (in Middle Persian and Syriac Mānī, Greek Μάνης, Latin Manes; also Μανιχαίος, Latin Manichaeus, from Syriac ܡܐܢܝ ܚܝܐ Mānī ḥayyā "Living Mani", c. AD 216–76), of Iranian origin[1][2][3][4] was the prophet and the founder of Manichaeism, a gnostic religion of Late Antiquity which was once widespread but is now extinct. Mani was born in or near Seleucia-Ctesiphon in Asuristan (Assyria), at the time still part of the Parthian Empire. Six of his major works were written in Syriac Aramaic and the seventh, dedicated to the king of the empire, Shapur I, was written in Middle Persian.[5] He died in Gundeshapur, under the Sassanid Empire.

Until the 20th century, no reliable information on Mani's biography was known. Such medieval accounts as were known are either legendary or hagiographical, such as the account in Fihrist by Ibn al-Nadim, purportedly by al-Biruni, or anti-Manichaean polemics, such as the 4th century Acta Archelai. Among these medieval accounts, Ibn al-Nadim's account of Mani's life and teachings is generally speaking the most reliable and exhaustive. Notable in this account is the near-complete absence of the "Third Ambassador", who is merely mentioned with the name bašīr "messenger of good news", and the absence of the topos of "Mani the Painter" (which in other Islamic accounts almost completely replaces that of "the founder of a religion").[6]

In 1969 in Upper Egypt a Greek parchment codex of ca. 400 AD was discovered. It is now designated Codex Manichaicus Coloniensis because it is conserved at the University of Cologne. It combines a hagiographic account of Mani's career and spiritual development with information about Mani's religious teachings and contains fragments of his writings.

The 5th century Cologne Mani-Codex and other evidence discovered in the 20th century establishes Mani as a historical individual.[7]

Mani was born near Seleucia-Ctesiphon, perhaps in the town Mardinu in the Babylonian district of Nahr Kutha, according to other accounts in the town Abrumya. Mani's father Pātik (Middle Persian Pattūg[8]; Greek Παττικιος, Arabic Futtuq), a native of Ecbatana[9] (modern Hamadan, Iran), was a member of the Jewish-Christian sect of the Elcesaites (a subgroup of the Gnostic Ebionites). His mother was of Parthian[10][11] descent (from "the Armenian Arsacid family of Kamsarakan"[12]); her name is reported variously, among others Mariam. At ages 12 and 24, Mani had visionary experiences of a heavenly twin of his, calling him to leave his father's sect and teach the true message of Christ. In 240–41, Mani travelled to "India" (i.e. to the Sakhas in modern-day Afghanistan), where he was probably influenced by Greco-Buddhism. Returning in 242, he joined the court of Shapur I, to whom he dedicated his only work written in Persian, known as the Shabuhragan. Shapur was not converted to Manichaeanism and remained Zoroastrian.[13]

Shapur's successor Hormizd I (who reigned only for one year) appears to still have patronized Mani, but his successor Bahram I, a follower of the Zoroastrian reformer Kartir, began to persecute the Manichaeans. He incarcerated Mani, who died in prison within a month, in AD 276 or 277.[14] Mani's followers depicted Mani's death as a crucifixion in conscious analogy to the death of Christ.

The canon of Mani included six works originally written in Syriac, and one in Persian, the Shapuragan, While none of his books have survived in complete form, there are numerous fragments and quotations of them, including a long Syriac quotation from one of his works, as well as a large amount of material in Middle Persian, Coptic, and numerous other languages. Examples of surviving portions of his works include: the Shabuhragan (Middle Persian), the Book of Giants (numerous fragments in many languages), the Fundamental Epistle (quoted in length by Saint Augustine), a number of fragments of his Living Gospel (or Great Gospel), a Syriac excerpt quoted by Theodore Bar Konai, and his Letter to Edessa contained in the Cologne Mani-Codex.

Mani's teaching is designed as succeeding and surpassing the teachings of Christianity, Zoroastrianism and Buddhism. It is based on a rigid dualism of good and evil, locked in eternal struggle. In his mid-twenties, Mani decided that salvation is possible through education, self-denial, fasting and chastity. Mani claimed to be the Paraclete promised in the New Testament, the Last Prophet or Seal of the Prophets. The other prophets included Seth, Enoch, Noah, Shem, Abraham, Nikotheos, Zoroaster, Buddha and Jesus.[15]

Mani's followers were organized in a church structure, divided into a class of "elects" (electi) and "auditors" (auditori). Only the electi are required to follow the laws strictly, while the auditori care for them, hoping to become electi in their turn after reincarnation.

The Christian tradition of Mani is based on Socrates of Constantinople, a historian writing in the 5th century. According to this account, one Scythianos, a Saracen, husband of an Egyptian woman, "introduced the doctrine of Empedocles and Pythagoras into Christianity"; that he had a disciple, "Buddas, formerly named Terebinthus," who travelled in Persia, where he alleged that he had been born of a virgin, and afterwards wrote four books, one of Mysteries, a second The Gospel, a third The Treasure, and a fourth Heads. While performing some mystic rites, he was hurled down a precipice by a daimon, and killed. A woman at whose house he lodged buried him, took over his property, and bought a boy of seven, named Cubricus. This boy she freed and educated, leaving him the property and books of Buddas-Terebinthus. Cubricus then travelled into Persia, where he took the name of Manes and gave forth the doctrines of Buddas Terebinthus as his own. The king of Persia, hearing that he worked miracles, sent for him to heal his sick son, and on the child's dying put Manes in prison. Thence he escaped, flying into Mesopotamia, but was traced, captured, and flayed alive by the Persian king's orders, the skin being then stuffed with chaff and hung up before the gate of the city.

For this narrative, Socrates gives as his authority "The Disputation [with Manes] of Archelaus bishop of Caschar," a work either unknown to or disregarded by Eusebius, who in his History (vii.31) briefly vilifies Manes without giving any of the above details. In the Chronicon of Eusebius the origin of the sect is placed in the second year of Probus, AD 277.[16] According to Jerome, Archelaus wrote his account of his disputation with "Manichæus" in Syriac, whence it was translated into Greek. The Greek is lost, and the work, apart from extracts, subsists only in a Latin translation from the Greek, of doubtful age and fidelity, probably made after the 5th century. By Photius it is stated that Heraclean, bishop of Chalcedon, in his book against the Manichæans, said the Disputation of Archelaus was written by one Hegemonius, an author not otherwise traceable, and of unknown date.

In the Latin narrative, "Manes" is said to have come, after his flight from court, from Arabion, a frontier fortress, to Caschar or Carchar, a town said to be in Roman Mesopotamia, in the hope of converting an eminent Christian there, named Marcellus, to whom he had sent a letter beginning: "Manichæus apostle of Jesus Christ, and all the saints and virgins with me, send peace to Marcellus." In his train he brought twenty-two (or twelve) youths and virgins. At the request of Marcellus, he debated on religion with bishop Archelaus, by whom he was vanquished; whereupon he set out to return to Persia. On his way he proposed to debate with a priest at the town of Diodorides; but Archelaus came to take the priest's place, and again defeated him; whereupon, fearing to be given up to the Persians by the Christians, he returned to Arabion. At this stage Archelaus introduces in a discourse to the people his history of "this Manes," very much to the effect of the recapitulation in Socrates. Among the further details are these: that Scythianus lived "in the time of the Apostles"; that Terebinthus said the name of Buddas had been imposed on him; that in the mountains he had been brought up by an angel; that he had been convicted of imposture by a Persian prophet named Parcus, and by Labdacus, son of Mithra; that in the disputation he taught concerning the sphere, the two luminaries, the transmigration of souls, and the war of the Principia against God; that "Corbicius" or Corbicus, about the age of sixty, translated the books of Terebinthus; that he made three chief disciples, Thomas, Addas, and Hermas, of whom he sent the first to Egypt, and the second to Scythia, keeping the third with him; that the two former returned when he was in prison, and that he sent them to procure for him the books of the Christians, which he then studied. According to the Latin narrative, finally, Manes on his return to Arabion was seized and taken to the Persian king, by whose orders he was flayed, his body being left to the birds, and his skin, filled with air, hung at the city gate.[17] 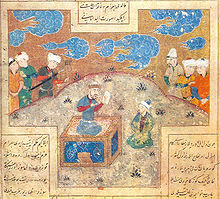 In the medieval Islamic tradition, Mani is described as a painter who set up a sectarian movement in opposition to Zoroastrianism. He was persecuted by Shapur I and fled to Turkestan, where he made disciples and embellished with paintings a Tchighil (or picturarum domus Chinensis) and another temple called Ghalbita. Provisioning in advance a cave which had a spring, he told his disciples he was going to heaven, and would not return for a year, after which time they were to seek him in the cave in question. They then and there found him, whereupon he showed them an illustrated book, called Ergenk, or Estenk, which he said he had brought from heaven: whereafter he had many followers, with whom he returned to Persia at the death of Shapur. The new king, Hormisdas, joined and protected the sect; and built Mani a castle. The next king, Bahram or Varanes, at first favoured Mani; but, after getting him to debate with certain Zoroastrian teachers, caused him to be flayed alive, and the skin to be stuffed and hung up. Thereupon most of his followers fled to India, and some even to China, those remaining being reduced to slavery.

In yet another Muslim account we have the details that Mani's mother was named Meis or Utachin, or Mar Marjam (Sancta Maria); and that he was supernaturally born. At the behest of an angel he began his public career, with two companions, at the age of twenty-four, on a Sunday, the first day of Nisan, when the sun was in Aries. He travelled for about forty years; wrote six books, and was raised to Paradise after being slain under Bahram "son of Shapur." Some say he was crucified "in two halves" and so hung up at two gates, afterwards called High-Mani and Low-Mani; others that he was imprisoned by Shapur and freed by Bahram; others that he died in prison. "But he was certainly crucified."[18]