"Diamonds & Rust" is a song written and performed by Joan Baez - it was released in 1975, but had been written the previous November.

In the song, Baez recounts an out-of-the-blue phone call from an old lover, which sends her a decade back in time, to a "crummy" hotel in Greenwich Village; she recalls giving him a pair of cuff-links, and summarizes that memories bring "diamonds and rust" (i.e. time leaves us with both happy and bad memories).

The song, which was a top-40 hit for Baez on the U.S. pop singles chart, is regarded by a number of critics, as well as by Baez fans, as one of her best compositions. It served as the title song on Baez's gold-selling Diamonds & Rust album in 1975.

The song alludes to Baez's relationship with Bob Dylan ten years before. In her memoir, And a Voice to Sing With (1987), she recounted how she told Dylan that the song was about her ex-husband David Harris, thereby countering the rumors that the song was about Dylan and Baez[citation needed]. Although Dylan is not specifically named in the song, Baez uses phrases from the song in describing her relationship with Dylan in the third chapter of the memoir, and has been explicit that he was the inspiration for the song. 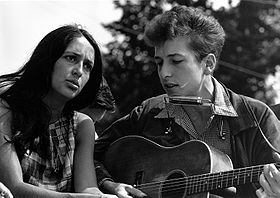 In And a Voice to Sing With, Baez remembers a conversation between her and Dylan:

"You gonna sing that song about robin's eggs and diamonds?" Bob had asked me on the first day of rehearsals.
"Which one?"
"You know, that one about blue eyes and diamonds..."
"Oh", I said, "you must mean 'Diamonds And Rust', the song I wrote for my husband, David. I wrote it while he was in prison."
"For your husband?" Bob said.
"Yeah. Who did you think it was about?" I stonewalled.
"Oh, hey, what the fuck do I know?"
"Never mind. Yeah, I'll sing it, if you like."

Baez's marriage to Harris had, in fact, already ended by the time the song was written. In an interview [1] with music writer Mike Ragogna, Baez later admitted that the character in the song is Dylan:

MR: "Diamonds And Rust" was another magic moment. You've said when you began writing the song, it started as something else until Dylan phoned you. Then it became about him. That must have been one hell of a call.
JB: He read me the entire lyrics to "Lily, Rosemary and the Jack of Hearts" that he'd just finished from a phone booth in the Midwest.
MR: What was the song about originally?
JB: I don't remember what I'd been writing about, but it had nothing to do with what it ended up as.

The song was later covered with edited lyrics by Judas Priest for the album Sin After Sin. It was originally recorded a year earlier for Sad Wings of Destiny but not included on the album- and this early version appears on The Best of Judas Priest, Hero, Hero, as well as some remasters of their first album, Rocka Rolla. A live version of the song is on Unleashed in the East. The song remains a staple of Judas Priest live concert performances. In recent years, Priest have been performing a mostly-acoustic version of the song that is more similar to the original than the rock version on their recorded albums.

The song has been sampled in two popular hip-hop songs, "Happiness" and "Upgrade Call", by Busdriver and Andre Nickatina respectively. The versions used in both songs are pitched-warped to sound squeaky.