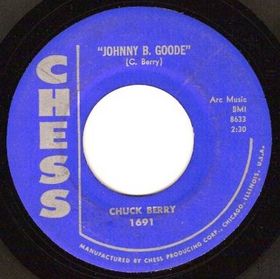 Written by Berry in 1955, the song is a rock and roll version of the &mdash; a poor country boy becomes a star by hard work and inspired playing. Indeed, this image of unknowns with no future achieving fame and fortune through music became a paradigm for countless songs and even careers to follow.

Although partly autobiographical, the inspiration for the song is said to have been Johnnie Johnson who played the and composed several songs with Berry, and is considered a major contributor to the unmistakable Berry sound. On earlier unreleased takes Chuck sang "colored boy" instead of "country boy", but it was changed for fear of it not being played on the radio. As a possible source for the last name, it has been noted that Berry was born on Goode Avenue in St. Louis. [http://www.kansascity.com/mld/kansascity/living/travel/14862285.htm] Aware of the importance of the song to his fame and his image, Berry has written two more songs about Johnny, "Bye Bye Johnny" and "Go Go Go", and also titled an as "". Berry's recording of the song was included on the , attached to the Voyager spacecraft as representing rock and roll, one of three American songs included among many cultural achievements of humanity.

* recorded the song for the movie "" and for their album "" in .
*In the movie "", the back-in-time performs this song at a high school dance in (actually sung by Andrew Marr), after the band's guitarist (who happens to be named Marvin Berry) injures his hand. Astounded by McFly's rather prescient guitar heroics (which include imitations of the future and ), Marvin calls his cousin Chuck, who listens in on "the new sound [he's] been looking for". This creates an apparent paradox, with the song "Johnny B. Goode" having never actually been written by anyone. The scene was also revisited in ""."Johnny B. Goode" has been mentioned many times by other artists and writers, with references in movies, television shows, commercials, books and other songs, including the following notable examples:

*The song's title is often used as a literary . An excellent example is in an Australian advertisement for : while a character named Johnny is robbing a convenience store, a caption appears, ironically reading "Johnny be good". Similarly, used references to Johnny in their song "Come Back Johnny" which, (along with their cover of the ' early hit Satisfaction) clearly delineates the contrasting nature of their stylized electronic approach. Also, "Johnny B. Goode" is mentioned for comedic effect in 's song "The Purple People Eater Meets the Witch Doctor."

*In , the episode's title "Stewie B. Goode" is a refrence to this song.

*In 2004, Democratic nominee for president used the song as a theme song at most of his campaign events, and relief pitcher warmed up to the song for most of his career

*"Johnny B. Goode" has also been used in several hit musicals. The song is the finale in "" and also is the final song in the finale act of "".

*The "" episode "Hooray For Presidents" featured a Kid Chorus song about sung to this song's tune.

*One of the main characters in the short-lived 80's comedy , a rock guitarist and singer, goes by the name Johnny B (for Bukowski). He is offered a Chuck Berry ("C the B") compilation on audio cassette, as a peace offering, and later sings "Johnny B. Goode" while using his lightning powers to hold off the military during a rescue operation.

*The episode of titled "Nell's Secret Admirer" opens with Joey and performing "Johnny B. Goode", with Joey on keyboard and Matthew with a baby-sized electric guitar.

*A song in the video game is titled as "Johnny C Bad". (The two songs are not otherwise similar.)

* and danced their Jive to this song in Week 7 of .

*A recording of the song by Berry was included in the to represent the culture of the United States to any extraterrestrial life which might encounter it.

* Author included a key reference to the song in his book "" in which the protagonist ("Bud of the Holly" in Welsh) sings and plays two versions of a song Imp wrote. The song's title is "Sioni Bod Da" - Llamedos (Welsh) for "Johnny Be Good".

* Johnny Lazo of the is introduced in the starting line-up as "Go Johnny Go, Johnny Lazo!"

*The song was reused in the EarthBound video game series as the Hippie battle theme.

*The song is used at many campaign events.

*The song is used at when relief pitcher comes out of the bullpen.

"Johnny B. Goode" is among the most widely covered rock and roll songs in history. The list of performers includes: