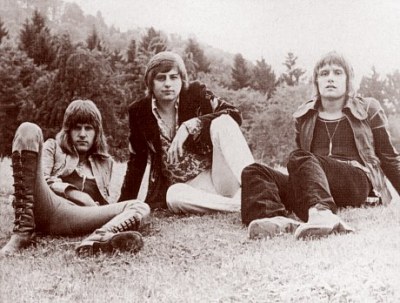 After playing at a few of the same concerts, Emerson and Lake tried working together and found their styles to be not only compatible, but complementary. They wanted to be a keyboard/bass/drum band, and so searched out a drummer.

Before settling on Carl Palmer, they approached of ; Mitchell was uninterested but passed the idea to . Hendrix, tired of his band and wanting to try something different, expressed an interest in playing with the group. The British press, after hearing about this, speculated that such a supergroup would have been called "HELP", or "Hendrix, Emerson, Lake & Palmer". [ [http://www.emersonlakepalmer.com/bio.html ELP - Biography] ] . Due to scheduling conflicts, such plans were not immediately realised, but the initial three planned a jam session with Hendrix after their second concert at the Isle of Wight Festival (their debut being in Plymouth Guildhall six days earlier), with the possibility of him joining. Hendrix died shortly thereafter, so the three pressed on as Emerson, Lake and Palmer.

Greg Lake made this comment on ELP's discussions with Hendrix:

:"Yeah, that story is indeed true, to some degree...Mitch Mitchell had told Jimi about us and he said he wanted to explore the idea. Even after Mitch was long out of the picture and we had already settled on Carl, talk about working with Jimi continued. We were supposed to get together and jam with him around August or September of 1970, but he died before we could put it together."

Their first four years were a creatively fertile period. Lake produced their first six albums, starting with "Emerson, Lake and Palmer" (1970), which contained the hit "Lucky Man". Their best known early performance had been a relatively modest show at the August 1970 Isle of Wight Festival, one of the last of the great Woodstock-era festivals. At the end of their set, Emerson and Lake lit two cannons either side of the stage.

"" (1971) was their first successful , described as a story about "reverse evolution". The March 1971 live recording (Newcastle, UK) of the band's interpretation of 's was issued as a low-priced record, the success of which contributed to the band's overall popularity. The 1972 album "Trilogy" contained ELP's best-selling single, the understated "From the Beginning".

In 1973, the band had garnered enough recognition to form their own , , and purchased an abandoned cinema as their own rehearsal hall. In late 1973, "", with an eye-catching sleeve designed by , was released and became the band's best-known studio album. The lyrics were partly written by , who was the lyricist for King Crimson's first four albums. The subsequent world tours were documented with a massive three-LP live recording, "Welcome Back my Friends to the Show that Never Ends".

By April 1974, ELP were top of the bill during the Festival, pushing co-stars to second billing. ELP's California Jam performance was broadcast nationwide in the US and is often seen as the summit of the band's career.

The ELP sound was dominated by the and of the flamboyant Emerson. The band's compositions were heavily influenced by classical music in addition to and – at least in their early years – . Many of their pieces are arrangements of, or contain quotations from, classical music, and they can be said to fit into the sub-genre of .

Onstage, the band exhibited an unorthodox mix of virtuoso musicianship and over-the-top theatrical bombast. Their extravagant and often aggressive live shows received much criticism in this regard – although in retrospect it was all rather small change compared to later rock spectacles: the theatrics were limited to a Persian carpet, a spinning end-over-end, a rotating percussion platform, and a being thrown around on stage to create feedback. Emerson often used a knife given to him by (who had roadied for Emerson's previous band, ) to force the keys on the organ to stay down.Fact|date=November 2007 Another unusual factor was that Emerson took a full (an enormous, complex, and unpredictable instrument under the best of conditions) on the road with him, which added greatly to a tour's complexity.

ELP then took a three-year break to reinvent its music but lost contact with the changing musical scene. The band toured the US and Canada in 1977 and 1978 on a killing schedule of night after night performances – some with a full , which was a heavy burden on the tour revenues. These late-1970s tours found ELP working harder than ever to stay in touch with their audience. But as , , corporate rock and New Wave styles began to alter the musical landscape, ELP could no longer generate the excitement of being forerunners in musical innovation. Eventually, they drifted apart due to personality conflicts and irreconcilable differences concerning musical direction.

Their last studio album of the 1970s, "" (1978), was dismissed even by the trio itself, who admitted it was delivered to fulfill a contractual obligation.Fact|date=November 2007 The "Love Beach" album has been ill-received not only by the music press but also by the fans, who easily understood that the group was tired, something admitted in various interviews. Side One features Lake and consists of several shorter songs in a late 70's attempt to put something in the pop charts. Side Two's composition, "Memoirs of an Officer and a Gentleman", is a four-part narration of the tale of a soldier in the Second World War, and his ordeal of love and death as well as tragedy and triumph. The album's cover engendered no small amount of ridicule, with Palmer complaining the group looked like the Bee Gees.

In 1985, Emerson and Lake formed another "ELP" band with heavy metal drummer . Palmer declined to participate in a reunion, preferring to stay with Asia. Rumours also linked to their new lineup, but the former Yes drummer remained committed to and his own group, Earthworks. The album "Emerson Lake & Powell" charted reasonably well, with a major single, "Touch and Go" generating some radio and MTV exposure for the trio. However, the old interpersonal tensions between Lake and Emerson resurfaced during the 1986 tour. Emerson and Palmer subsequently joined with Robert Berry to form the unsuccessful band 3.

The original ELP lineup reformed and issued a 1992 comeback album, "Black Moon", on JVC. Their 1992/1993 world tours were successful, culminating in a performance at the Wiltern Theatre in Los Angeles in early 1993 that has been heavily bootlegged. But, reportedly, Palmer suffered from Fact|date=November 2007 and Emerson has been treated for a repetitive stress disorder in one handFact|date=April 2008. Although some have attributed the disappointment of the follow-up album "" (1994) to these problems, it is self-evident that physical limitations do not cause a lack of musical inspiration.

Emerson and Palmer recovered to tour again. The last ELP tours were in 1996, 1997, and 1998. Their tour schedules brought them to , , , the USA and and ELP played fresh new versions of older work. However enjoyable these tours were, ELP played in significantly smaller venues for significantly smaller audiences (sometimes fewer than 500 people, as in , ). Their last show was in San Diego, California, on August 31, 1998. Conflicts about a new album inspired a new and final break up. Greg Lake insisted on producing the next album, having produced all successful ELP albums in the early 1970s. Keith Emerson complained in public (on the internet) that although he and Carl Palmer worked out on a daily basis to maintain their musical skills, Greg Lake did not make the effort to do the same. Lake admitted that he did not train his voice: a few live shows were generally enough to get it in shape, he claimed.

In 2003, UK independent label Invisible Hands Music released a 3CD box set under the title "Reworks: Brain Salad Perjury". This was a new work created by Keith Emerson in collaboration with British dance maverick Mike Bennett, using sampling technology and with an eye on club and ambient music styles. Emerson and Bennett sampled musical elements from the entire ELP oeuvre, creating entirely new music in an exotic, electronica style, opening with a dramatic reinterpretation of Fanfare For The Common Man. The musical complexity of the source material provided rich pickings for sampling and while not universally loved by ELP fans,Fact|date=November 2007 the album found favour with critics and, impressively, the dance music community. Cuts from the album were widely played in clubs and, fleetingly at least, the band's music found a gigantic new audience who had never heard (or even heard of) Emerson Lake & Palmer.

Keith Emerson toured Britain with his old bandmates from during 2003, and played another tour with The Keith Emerson Band across North America and Europe. Drummer Carl Palmer tours on an irregular basis with his Carl Palmer Band, playing electric guitar adaptations of ELP's keyboard work on the club circuit. Greg Lake has toured the USA with in 2001, and most recently has recorded with . Lake has recently formed his own band featuring David Arch, Florian Opahle, Brett Morgan, Trevor Barry and Josh Grafton and toured the UK in Autumn 2005. The band was due to do a tour of the USA in September 2006 but was cancelled because of management problems. In 2006, Carl Palmer rejoined the other three members of Asia for a 25th reunion world tour.