Pictures at an Exhibition (album)

Pictures at an Exhibition (album) 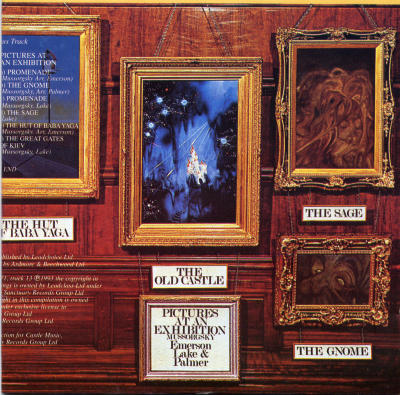 "Pictures at an Exhibition" is an album by British band , released in 1971 as a live album and re-released in 2001 as a remastered edition including both live and studio versions of Mussorgsky's classical piece . The original live album was recorded at in . The opening track of the album was played on a pipe organ which was installed in the City Hall in 1928. The organ console is some way above stage level, at the top of a stepped terrace used for choral performances. The drum roll connecting the opening track to the next served to cover Emerson's dash back down to the stage.

There was also a video made of a different live performance. This had a limited theatrical release in 1973, and a remastered release with in 2000. This performance is notable for the energy passed by the three young musicians. Being a live album, sometimes Keith Emerson's voltage-controlled plays the wrong notes, apparently due to power supply problems.

The original album cover used a gatefold sleeve depicting, on the outside, blank picture frames labeled with the titles of the pieces: "The Old Castle", "The Gnome", etc. On the inside all the pictures were revealed, but one remains blank: "Promenade". (The musical piece, of course, is not about a picture, but represents a walk through the gallery.)

Some CD covers use only the "revealed" version.

Mussorgsky's "Pictures at an Exhibition" was also performed in a different electronic arrangement by and in a heavy metal adaptation by the German band "Mekong Delta". These both are more complete versions of the original suite.

* Nutrocker / The Great Gates of Kiev