Types of RSIs that affect computer users may include non-specific arm pain[2] or work related upper limb disorder (WRULD). Conditions such as RSI tend to be associated with both physical and psychosocial stressors.[3] 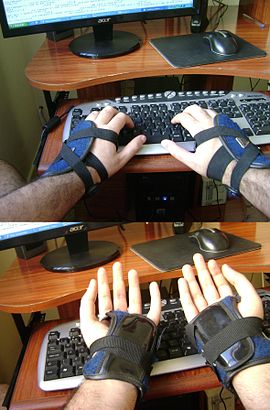 Gloves to avoid RSI during typing.

RSI is believed by many to be caused due to lifestyle without ergonomic care[citation needed], E.g. While working in front of computers, driving, traveling etc. Simple reasons like 'Using a blunt knife for everyday chopping of vegetables', may cause RSI.

Other typical habits that some sources believe lead to RSI:[citation needed]

The following complaints are typical in patients who might receive a diagnosis of RSI:[4]

In contrast to carpal tunnel syndrome, the symptoms tend to be diffuse and non-anatomical, crossing the distribution of nerves, tendons, etc. They tend not to be characteristic of any discrete pathological conditions.

A 2008 study showed that 68% of UK workers suffered from some sort of RSI, with the most common problem areas being the back, shoulders, wrists, and hands.[5]

The physical examination discloses only tenderness and diminished performance on effort-based tests such as grip and pinch strength—no other objective abnormalities are present. Diagnostic tests (radiological, electrophysiological, etc.) are normal. In short, RSI is best understood as an apparently healthy arm that hurts. Whether there is currently undetectable damage remains to be established.

The term "repetitive strain injury" is most commonly used to refer to patients in whom there is no discrete, objective, pathophysiology that corresponds with the pain complaints. It may also be used as an umbrella term incorporating other discrete diagnoses that have (intuitively but often without proof) been associated with activity-related arm pain such as carpal tunnel syndrome, cubital tunnel syndrome, thoracic outlet syndrome, DeQuervain's syndrome, stenosing tenosynovitis/trigger finger/thumb, intersection syndrome, golfer's elbow (medial epicondylosis), tennis elbow (lateral epicondylosis), and focal dystonia.

Finally RSI is also used as an alternative or an umbrella term for other non-specific illnesses or general terms defined in part by unverifiable pathology such as reflex sympathetic dystrophy syndrome (RSDS), Blackberry thumb, disputed thoracic outlet syndrome, radial tunnel syndrome, "gamer's thumb" (a slight swelling of the thumb caused by excessive use of a gamepad), "Rubik's wrist" or "cuber's thumb" (tendinitis, carpal tunnel syndrome, or other ailments associated with repetitive use of a Rubik's Cube for speedcubing), "stylus finger" (swelling of the hand caused by repetitive use of mobile devices and mobile device testing.), "raver's wrist", caused by repeated rotation of the hands for many hours (for example while holding glow sticks during a rave).

Although tendinitis and tenosynovitis are discrete pathophysiological processes, one must be careful because they are also terms that doctors often use to refer to non-specific or medically unexplained pain, which they theorize may be caused by the aforementioned processes.

Doctors have also begun making a distinction between tendinitis and tendinosis in RSI injuries. There are significant differences in treatment between the two, for instance in the use of anti-inflammatory medicines, but they often present similar symptoms at first glance and so can easily be confused.

On their own, most RSIs will resolve spontaneously provided the area is first given enough rest when the RSI first begins. However, without such care, some RSIs have been known to persist for years, or have needed to be cured with surgery.

The most often prescribed treatments for repetitive strain injuries are rest, exercise, braces and massage. A variety of medical products also are available to augment these therapies. Since the computer workstation is frequently blamed for RSIs, particularly of the hand and wrist, ergonomic adjustments of the workstation are often recommended.

Modifications of posture and arm use (ergonomics) are often recommended.[6] 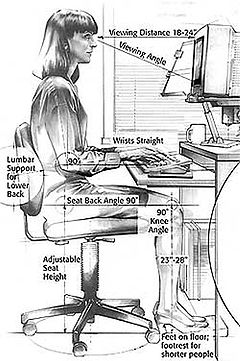 Ergonomics: the science of designing the job, equipment, and workplace

There are several kinds of software designed to help in repetitive strain injury. Among them, there are speech recognition software, and break timers. Break timers software reminds the user to pause frequently and perform exercises while working behind a computer. There is also automated mouse-clicking software that has been developed, which can automate repetitive tasks in games and applications.

Switching to a much more ergonomic mouse, such as a roller mouse, vertical mouse or joystick, or switching from using a mouse to a stylus pen with graphic tablet may provide relief, but in chronic RSI they may result only in moving the problem to another area. Using a graphic tablet for general pointing, clicking, and dragging (i.e. not drawing) may take some time to get used to as well. Switching to a trackpad or pointing stick, which requires no gripping or tensing of the muscles in the arms may help as well. Inertial mice (which do not require a surface to operate) might offer an alternative where the user's arm is in a less stressful thumbs up position rather than rotated to thumb inward when holding a normal mouse. Also, since they do not need a surface to operate ("air mice" function by small, forceless, wrist rotations), the wrist and arm can be supported by the desktop.

Exotic keyboards by manufacturers such as Datahand, OrbiTouch, Maltron and Kinesis are available. Also one can use digital pens to avoid the strain coming from typing itself. Other solutions move the mode of input from one's hands entirely. These include the use of voice recognition software or pedals designed for ergonomics and gaming to supplant normal keyboard input.

Tablet computers such as the iPad are also valuable to RSI sufferers, since overall strain is much reduced by the keyless nature of the device and the minimal finger movement involved, as well as the much greater variety of body postures while using the device and the replacement of the mouse by a touch screen.[citation needed] Although not a complete solution, it can be a good way to do day-to-day personal computing tasks. 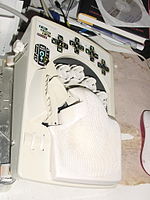 A number of medical treatments, including non-narcotic pain medications, braces, and therapy. Although some professionals consider these to be palliative, others consider them to be effective.[7][8]

Pain medications, particularly non-steroidal anti-inflammatory drugs (NSAIDs), are most often used to eliminate pain. The major problem with such drug use with RSIs is that the pain can be masked, and therefore the patient returns to the activities which strained the tissues in the first place before the tissues have had time to heal. So a balance must be struck where pain is reduced, yet not so much that the tissues will be reinjured with continued over-use.

Braces, particularly wrist braces, are by far the most often used products for RSIs[citation needed]. They stabilize the hand and allow healing to occur without further stressing the joint. Braces are available in two basic varieties; soft (i.e., nylon fabric) and hard shell.

Resuming normal activities despite the pain

Psychologists Tobias Lundgren and Joanne Dahl have asserted that, for the most difficult chronic RSI cases, the pain itself becomes less of a problem than the disruption to the patient's life caused by

They claim greater success from teaching patients psychological strategies for accepting the pain as an ongoing fact of life, enabling them to cautiously resume many day-to-day activities and focus on aspects of life other than RSI.[8]

Studies have related RSI and other upper extremity complaints with psychological and social factors. A large amount of psychological distress showed doubled risk of the reported pain, while job demands, poor support from colleagues, and work dissatisfaction also showed an increase in pain, even after short term exposure.[11]

For example, the association of Carpal tunnel syndrome with arm use is commonly assumed but not well-established.[12] Typing has long been thought to be the cause of carpal tunnel syndrome,[13] but recent evidence suggests that, if anything, typing may be protective.[14] Another study claimed that the primary risk factors for Carpal tunnel syndrome were "being a woman of menopausal age, obesity or lack of fitness, diabetes or having a family history of diabetes, osteoarthritis of the carpometacarpal joint of the thumb, smoking, and lifetime alcohol intake."[15]

There are three common mechanisms by which a normally functioning human mind increases pain and pain-related disability.

Some doctors and medical researchers believe that stress is the main cause, rather than a contributing factor, of a large fraction of pain symptoms usually attributed to RSI. The most famous advocate of this point of view, Dr. John E. Sarno, Professor of Rehabilitation Medicine at the New York University Medical School considers that RSI, back pain, and other pain syndromes, although they sometimes have a physical cause, are more often a manifestation of tension myositis syndrome, a psychogenic disorder in which stress causes the autonomic nervous system to reduce blood flow to muscles, causing pain and weakness.[23]